"EXCUSE me, I've just given five performances and they've left their marks on my voice," Slovak mime Milan Sládek joked in a hoarse whisper during a press conference about his latest project. 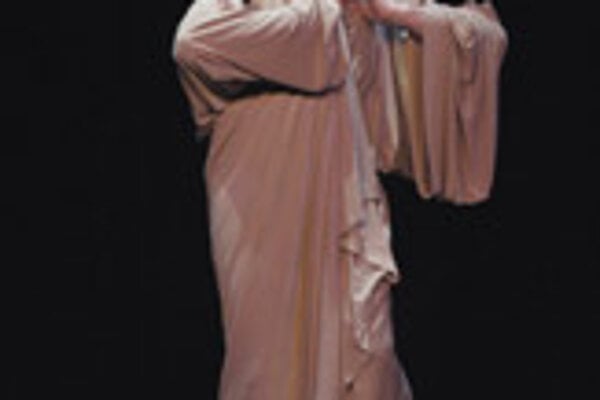 "EXCUSE me, I've just given five performances and they've left their marks on my voice," Slovak mime Milan Sládek joked in a hoarse whisper during a press conference about his latest project.

Those in attendance could hardly have wished for a better introduction from the pioneer of Slovak mime, who has remained true to the art of delicate gestures despite his advanced age and some difficult times.

Life as a mime started for Sládek when he opened a book. He was a teenager, and the book was about the life of Bohemian-French mime Jean-Gaspard Deburau. It made such an impression on the young Sládek that he decided then and there to pursue the art.

But Sládek, who just turned 70, has not had an easy life. Mime still isn't a mainstream art in Slovakia, which led him to emigrate to the West. He ended up in Cologne, Germany, where he opened a mime theatre.

After the fall of socialism in the former Czechoslovakia, Sládek returned to Bratislava to nurture the mime scene. But in 2002, he went back to Germany. He still works there, and has some interesting projects in the pipeline.

On February 23th, his 70th birthday, Sládek premiered his newest routine, New Solo Mime, in Cologne. After four reprises, he went to Bratislava to celebrate his birthday in front of a Slovak audience.

The Slovak Spectator spoke to Sládek about the art of mime.

The Slovak Spectator (TSS): You celebrated your 70th birthday by premiering New Solo Mime. Was that supposed to imply that a mime is not restricted by age?

Milan Sládek (MS): Yes, it was. Of course, mimes are limited in their ability to move and perform, but I think that if someone stays intellectually and emotionally rich, they can reflect the reality of today, even though their body is not in the shape it was 50 years ago. And reflecting that reality allows them to live on, to grow as an artist and a human being.

TSS: When the issue of age is mentioned, you point to Japanese dancer Kazuo Ohno, who started a new career at the age of 72.

MS: I am very fortunate to know Kazuo Ohno, who is now about 102 years old. He has influenced me as much as the book about Deburau. When I invited him to perform at the mime festival in Cologne in 1986 or 1987, he was over 80, and he showed everyone what age really means. He was electrifying. When we were invited to perform at the festival in Ushimado, Japan in 1988, he was even better. His youthful curiosity filled his performances with immense power and energy. He is truly an example for me.

TSS: What does it feel like to perform in Bratislava for the first time in five years?

MS: It's not easy to say. It's a strange feeling.

TSS: You left your position as director of Bratislava's Aréna Theatre in 2002 to return to Cologne. Is mime more accepted there than in Slovakia?

MS: In Germany, I'm responsible for myself and my art. It is the same feeling I had when I went there before [Ed. note: in 1970, Sládek moved to Germany from Sweden after becoming persona non grata in the former Czechoslovak Republic following the Prague Spring]. I have to know how to assess the quality and subject of my work. In Slovakia, I had the feeling that I was always accountable to someone else.

It wasn't the media's criticisms of my work that bothered me, but the fact that they claimed that I simply did not have an audience. Those doing the criticising forgot that during the eight or 10 years that I was back in Slovakia, I saved and re-built one theatre, produced six pieces at the Aréna Theatre, two in the Slovak National Theatre Opera, one in the Nová Scéna Theatre and organised the Festival of Mime seven times, all while I supervised the reconstruction of the Aréna Theatre. The rebuilding of the theatre was also affected by the country's situation after the fall of communism. I always found it strange that my situation was compared with that of fully funded theatres with functional organisational and artistic systems. It was unfair.

I decided to leave when I saw that staying would be like vegetating. It would have distracted me from working on new projects and put me in a position of fighting for the post of the director.

It is a pity because that was around the time when Europe started to be interested in the Aréna Theatre. It was a chance to have a European organisation of mime right here in Bratislava. The Festival of Mime had already established the city as a place that was generous to mime, which people view as an original art, but not mainstream.

TSS: What does mime art mean to you? What inspired you to perform it?

MS: František Kožík's biography of French mime Jean-Gaspard Deburau, the best known of the Pierrots, is what inspired me to learn mime. Deburau's life was not only very interesting, but Kožík's descriptions of his acting evoked an image of how mime should be performed. I had not even heard or mime before then, not having seen it once. It was completely new for me.

I believe that mime is the purest form of acting. Because you cannot use words, you have to use your body, facial expressions and rhythm to express everything inside of you. And how to express, that is completely up to you. Non-verbal communication is like walking barefoot - you are more connected to the essence of being and living.

TSS: Kefka is one of the characters you have created. Your theatre in Cologne was even named after him. But forty-eight years after you brought him to life, is he still a part of you?

MS: I don't think Kefka and I could ever part, even though I don't employ him all the time. Every mime has had a character: Deburau had Pierrot, Marcel Marceau had Bip and Charlie Chaplin had his tramp, Charlie.

Kefka first appeared in the comedy Bump, in Prague, in 1960. But I realised that I'm not interested in a character that doesn't change. Kefka is my alter ego. Sometimes I hide behind him to act out parts of my private life and address certain issues with the public.

My vision of Kefka has determined the character of my performances several times. I staged Don Juan, a ballet mime by Christoph Willibald Gluck, under the title Kefka's Don Juan. I also did a clownish version of the opera Carmen, even though Kefka was not a character in it. Kefka is growing older with me, and when I have a need for him, he appears on the stage.