Slovakia needs an Obama of its own

Barack Obama is a gifted speaker. If the first time you see him is after reading for months how good he is, you may be underwhelmed, because he’s not Martin Luther King. But there’s no doubt he’s leagues better than his rivals, and he may well be the most inspiring political orator the US has seen since John F. Kennedy. 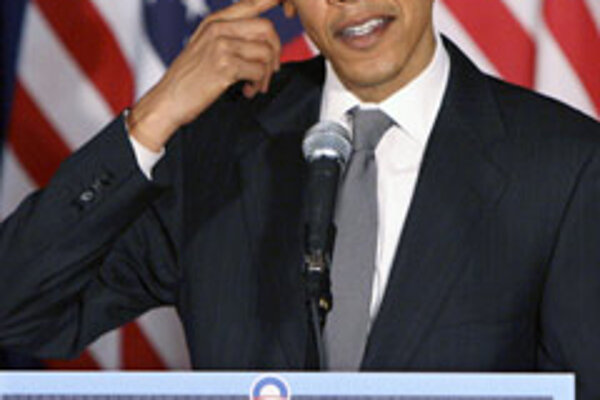 Barack Obama is a gifted speaker. If the first time you see him is after reading for months how good he is, you may be underwhelmed, because he’s not Martin Luther King. But there’s no doubt he’s leagues better than his rivals, and he may well be the most inspiring political orator the US has seen since John F. Kennedy.

America is clearly in the mood for Obama’s rousing oratory. The Democratic front-runner has raised a record $192 million in donations so far, $55 million in Febuary alone, and before losing in Texas and Ohio had beaten his opponent, Hillary Clinton, in 11 straight primary contests.

Naturally, she has been fighting back, and the easiest target is what separates Obama from the rest of the field – his power to inspire through words, and his promise of a new kind of politics that is beyond the sleazy, partisan norm. Clinton is thus trying to convince voters that the junior Senator from Illinois is just a fancy talker with no substance, who would soil his drawers if actually called on to lead the nation.

You can’t blame Clinton for taking this line – it must be disheartening to be so oratorically outgunned when words are the tools of your trade. But her “where’s the beef?” jibes are wide of the mark. Obama has policy papers on the economy, Iraq, foreign policy and health care, just like Clinton, and like his rival has also made concrete promises, such as to introduce a universal mortgage interest credit, to spend $150 billion on developing alternative energy, and to get US troops out of Iraq in 16 months. Meanwhile, he has 11 years of legislative experience to Hillary’s 8.

So what is this “empty rhetoric”, and why is it taking so much criticism? For starters, people everywhere tend to be suspicious of skilful oratory, as if it were a something undesirable in a leader (how much more comfortable we are with George Bush’s homely illiteracies and plodding delivery!). And Obama has yet to explain how his new politics will put food on the table of the working stiff.

Indeed, the Obama campaign’s “Yes, we can” slogan may sound like more of the same childish American positivism that brings smiles to European faces. But it’s much more than that – it’s about harnessing people’s desire to be inspired to solve pressing national problems (war, a slumping economy, and a divided society). Given that he may become the first black president in US history, it is fitting that Obama seems to be running more a civic movement than a political campaign.

Obama’s positive populism is so inspiring, even for non-Americans, that one wonders if it might not work in Slovakia. With the opposition in shambles – former PM Mikuláš Dzurinda battling a rebellion, the Christian Democrats a crippling defection, and the Hungarian coalition inner decay – there has never been a better time for a Slovak Obama to take the stage.

What would his message be, this Slovak Messiah? For starters, he or she might try to rekindle the hope that was generated by the opposition in 1998 (or 1989!), and then squandered by successive Dzurinda governments through corruption and failure to deliver on the promise of justice. Can we have a country whose court system serves the law rather than the rich? Yes, we can! Can we have politicians who serve the public rather than their sponsors? Yes, we can! Can we have public officials who are tolerant, civilized and law-abiding, and a society that welcomes difference and change? Yes, yes!

There are those who will say that positive positivism would not work in Slovakia. That Fico’s negative brand – politics is about power and interests, journalists are hyenas, the US visa requirement is against international law, etc. – is so successful because it speaks to the nation’s unrelenting pessimism. If this is true, then God help Slovakia. But if, after 20 years of cynical leadership, Slovaks do hunger to be inspired, then it’s time for the opposition to forget about their Dzurindas, Hrušovskýs and Csakys and go in search of an Obama of their own.