Košice is Slovakia’s latest boomtown. Following the arrival of major investors like US Steel and the Getrag car parts maker, other foreign firms have followed suit. Last year, the Košice region was No. 1 in FDI, attracting fully one-quarter of the 64 new investments to Slovakia, worth Sk42 billion overall. 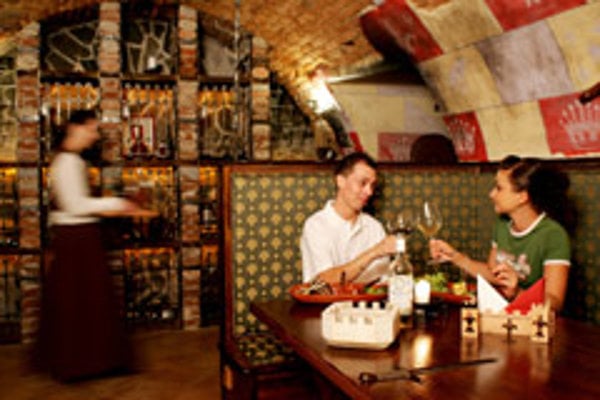 Camelot is one of several new fancy restaurants in Košice that are profiting from higher purchasing power. (Source: From internet web sites)
Font size:A-|A+

Košice is Slovakia’s latest boomtown. Following the arrival of major investors like US Steel and the Getrag car parts maker, other foreign firms have followed suit. Last year, the Košice region was No. 1 in FDI, attracting fully one-quarter of the 64 new investments to Slovakia, worth Sk42 billion overall.

This economic growth is starting to filter down into secondary markets. Košice region housing prices, for example, are now the second highest in Slovakia at an average of Sk24,472 a square meter, having risen almost 40% in 2007 from the year before, the highest rate of growth in the country.

The general boom has also sparked a revival on the restaurant market, where several new fine dining spots have opened in the last few year, capitalizing on the rise in consumer purchasing power and expectations. More than ever before, the residents of Slovakia’s second-largest city are beginning to explore the exciting world of exotic dishes and fine wines.

The city’s best-known quality restaurants, including Le Colonial, the 12 Apostles and the Uhorský dvor, are now facing competition from newcomers like Slamený dom, Mediterran, Camelot, Medmalina, Calabria and many others.

“Purchasing power has undoubtedly increased,” said Peter Škripko, manager of the Camelot restaurant. “If it hadn’t, we wouldn’t be able to run this type of restaurant. We provide only first-rate products and services, which of course means higher prices.”

Škripko said the relatively expensive menu has not deterred customers.

“On the contrary, our experience has been that people are increasingly willing to spend more if they get adequate quality,” he said. “Last year, for instance, we sold twice as much top-quality wine as in 2006.”

People are also travelling further than just around the corner to visit select restaurants. Slamený dom, whose name means the “Thatched Cottage”, is located in a remote suburb of Košice but has no lack of customers.

“We do what we can to get people to come,” said Vladimír Ščerba, manager of the Slamený dom. “For people who want the best roast duck in town, the fact that we are on the outskirts of the city is not a problem.”

According to Ščerba, his restaurant’s secret ingredient is quick service, fresh ingredients and a pleasant ambience – standard fare for quality restaurants, perhaps, but relatively scarce in Košice until recently.

“The atmosphere is almost as important as the food itself,” Ščerba said. “Both the exterior and interior of our restaurant are unique, and were designed by renowned architects and artists.”

Slamený dom’s thatched roof is more than just a gimmick or a trademark, he said. “Such roofs are known to have beneficial and calming effects. We may owe some of our success to this feature as well.”

The Mediterran restaurant has likewise gone with a stylish décor to attract clients.

“The renovation of the interior took us two years, but the compliments we got from our customers were the reward for our efforts,” said Róbert Čičvák, co-owner of the restaurant.

His partner, Predrak Unković, is Croatian, while Čičvák himself lived in Southern Europe for a few years. The menu therefore needed little discussion.

“The Mediterranean region evokes only pleasant images, so we’re trying to feed off that in our restaurant,” Čičvák said. “Many guests come here to recharge their batteries. Personnel from the US embassy in Slovakia, for example, have found the Mediterran so pleasant that they have dined here quite regularly.”

While the new owners and managers understand the importance of ambience and service, they say the quality of the food remains a priority.

“A good restaurant can’t work without original ingredients, which have to be imported from abroad,” Čičvák said. “Just as you can’t make bryndzové halušky [the Slovak national dish of dumplings and sheep cheese - ed. note] from Spanish flour, nor can you make Spanish salsa from Slovak peppers.”

Even though customer numbers are rising every month, Čičvák said the Košice restaurant scene still lags behind Bratislava or similar-sized cities abroad.

The impressive building housing the Slamený dom restaurant is easy to recognize thanks to its thatched roof. The menu features typical Slovak and Hungarian cuisine with a range of international dishes. It’s not centrally located, but it’s only a few minutes by car from downtown Košice.

The Camelot restaurant is exhaustively decked out in King Arthur trappings under arched wine-cellar ceilings. The meat-heavy menu features a wide range of local specialties (rabbit, goose, etc.), many of which are suitable for larger groups. Customers can choose from a wide range of Slovak or imported top-quality wines. The Camelot was awarded the second-best restaurant in Košice region by the Trend restaurant review in 2007.