Hidden by the Carpathian forests, two monuments to a proud past 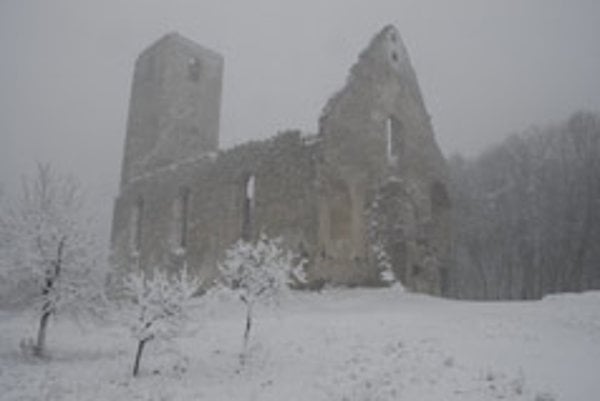 One such place, a site rich in history hidden in the forests of the Small Carpathians, is the ruins of the Dobrá Voda castle. Its name, Good Water, was inspired by the local springs.

The easiest way to get to the castle is to go to the village Dobrá Voda. It lies at the end of a road branching off from the main road between Pezinok and Modra under the foothills of the Small Carpathians.

As the village is at the end of the road, it’s pretty hard to get lost. The best place to start your hike is at the local cemetery, as the tourist trail with red markers goes through it, rather untraditionally. It passes a monument to the priest Ján Hollý (1785-1849), a Slovak poet and writer and an active member of the Slovak national revival movement. Hollý spent the last six years of his life in the village and was buried at the local cemetery.

Just beyond the gates of the cemetery lies a dense forest. It is part of the Slopy carst national park, which contains the Dobrá Voda ruins.

From the village of Dobrá Voda, it takes between 30 and 45 minutes to reach the castle. After about 10 minutes’ walk, you will see the remains of a Jewish cemetery on your left.

The first written reference to the castle dates back to 1263. Some legends say that it was built by the Templar Knights at the beginning of the 13th century. Some French books and chronicles contain references to the Dobrá Voda castle.

A wooden board at the site, covered with images depicting how the castle might have looked at its height, claims that a supporter of King Matúš Čák Trenčiansky built the castle in the late 13th century on the site of an old fortified settlement. Its task was to guard an ancient road crossing the Small Carpathians into the Czech Kingdom. Known as the Czech Road, this route led from Dechtice to Dobrá Voda, where it forked to Hradište pod Vrátnom and Brezová pod Bradlom.

The early Gothic castle lost some of its status during the 17th century, and gradually fell into disrepair. Despite occasional efforts to renew it, the dense surrounding forest has swallowed it up almost completely. Tall trees now grow in its former couryards and living quarters.

In the 1990s, Dobrá Voda locals recognised the potential of the castle as a possible tourist destination, and set out to save it. They cut down some of the trees and other vegetation in its vast premises and stabilized the walls.

Later, Slovak scouts joined the castle restoration drive with their project Odklínanie hradov (Disenchanting the Castles). They created trails at the castle and built wooden stairs and railings to make visiting the castle a safer proposition.

When approaching the castle, visitors first see - through the trees - the western bastion, which protected the entranceway. After the castle came under threat from the Ottoman invasion, its owners fortified it. At the time, the entry road had four gates, enabling the castle’s inhabitants to control it. Now only holes in the walls remain.

The remains of the walls, as well as some of the better-preserved pieces of architecture, give visitors an idea of how huge the castle once was. One can still make out the old guardhouse, a stone sink, towers and the palace as well as a chapel.

Even though the castle will never be restored to its previous splendour, this place retains an impression of its former beauty and grandeur.

Another local historical monument worth exploring is the nearby Katarínka, a former monastery. Efforts by young people to at least preserve the ruins in their current condition and prevent further decay have recently made this place a more popular destination.

Starting in Dobrá Voda village, the blue-marked tourist trail takes hikers to the remains of the monastery, a walk of about two hours. To reach Katarínka by car, you have to return from Dobrá Voda to the main road and drive to the village of Naháč. From Naháč, again following the blue-marked trail, it will take you about 40 minutes on foot to get to the monastery.

While walking along a stream, visitors will pass what appear to be the remains of cars. A sign explains that in April 1945, when the Soviet Red Army was approaching the town of Trnava and the village of Naháč, a German officer committed suicide here after witnessing the desperation of the retreating German soldiers. The villagers erected the sign on the 62nd anniversary of the liberation of the village on April 5 last year.

The hike to Katarínka is not demanding, as it becomes steep only shortly before the monastery. At the end visitors are greeted by a marvellous view of the site with a roofless church in the middle.

Katarínka retains a special, secluded atmosphere that allows us to imagine the placid life of the monks who lived there, far from the cares of a busy world.

Wooden boards put up around the church by the young people from the Katarínka salvation project show the process of restoration as well as images of how the monastery might have looked before falling into disrepair.

Katarínka is actually the ruins of the ancient church and monastery of St. Catherine of Alexandria. Katarínka is the diminutive of Catherine in Slovak.

Archaeological research shows that a Gothic chapel made of stone stood here in the 15th century. Count Krištof Erdödy established a Franciscan monastery on the site in 1618, and one year later, the first 12 monks were already living here.

The monastery, which was built in the early Baroque style with Gothic elements, was the work of Italian builder Pietro Spazzo.

Katarínka was also a destination for pilgrimages. During the 17th century it was damaged several times by Ottoman invaders and royal Hungarian armies, but it was always restored and its life continued.

Its popularity among the common people was shown by the complaints of a priest from nearby Naháč, Juraj Fándly, who wrote that his congregation preferred the St. Catherine church to the parish one. His complaints were recorded in his 1789 book, Dúwerná zmlúva mezi mníchom a diáblom (The Confidential Agreement Between the Monk and the Devil). This was the first work written in what is referred to as Bernolák Slovak, a language that preceded codified Slovak.

But after surviving marauding armies, the site was doomed by Emperor Joseph II , whose 1785 decree abolished St. Catherine’s monastery as “useless”, along with another 738 monasteries around the empire. Following this edict, Katarínka gradually fell into ruin.

In 1995, however, the “Katarínka Order of Preservationists” brought the site to life again. Within the Katarínka project, young volunteers work on the site during the summer months to save it from further decay and to uncover its turbulent and interesting past. In July and Augusts they spend two-week stays here to work with archaeologists.

The aim of the project is not to complete or remake the buildings but to preserve the site in its current shape for the generations to come. Not only are there insufficient funds for a complete re-construction, but those involved also want to retain the current appearance and atmosphere of the site.

Since 1995, when the first 70 volunteers from around Slovakia arrived to salvage the ruins of the monastery, hundreds of people have spent time here working and enjoying the local surroundings and atmosphere.

During their stays, the volunteers live cut off from civilization without watches or mobile phones, and follow the rules of the Order of Preservationists. For two weeks they travel in time and become medieval monks and nuns from the 17th century, living in nature without civilized amenities.

Dobrá Voda and Katarínka were both important sites in the past, but later almost disappeared from the country’s maps and memory. Now, these impressive ruins in the dense forests of the Small Carpathians only dimly recall their famous history, and hint at what might have been if time had been kinder. n

(in Slovak with some parts in English)