Message in a tower

TRNAVA has been known as the city of towers for centuries. No wonder, since as the centre of Catholicism in the Middle Ages it became home to many religious orders that built monasteries and churches here. The Town Tower, a Renaissance building in the city centre, has been Trnava’s best-known landmark ever since it was built. Originally it was erected as a watchtower to protect the town, whose open and flat location made it vulnerable. However, at the beginning of February this year, the importance of the Town Tower was overshadowed by another structure. 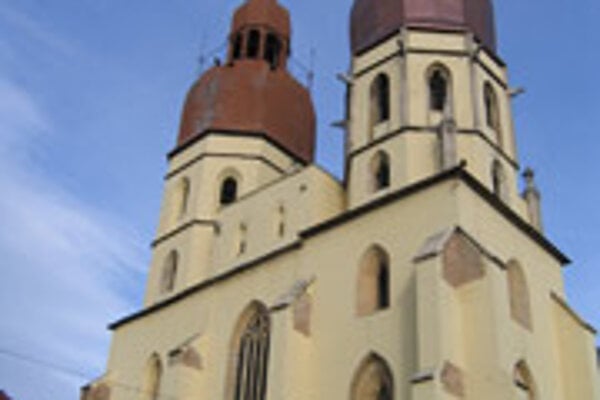 The dome on the northern tower of the Church of St. Nicolas contained a hidden message. (Source: SITA)
Font size:A-|A+  Comments disabled

TRNAVA has been known as the city of towers for centuries. No wonder, since as the centre of Catholicism in the Middle Ages it became home to many religious orders that built monasteries and churches here. The Town Tower, a Renaissance building in the city centre, has been Trnava’s best-known landmark ever since it was built. Originally it was erected as a watchtower to protect the town, whose open and flat location made it vulnerable. However, at the beginning of February this year, the importance of the Town Tower was overshadowed by another structure.

The northern tower of the Church of St. Nicolas has attracted the attention not only of archaeologists and conservationists, but also of the ordinary inhabitants of Trnava. After the reconstruction of the southern tower, which took place last year and was needed to shore up the church’s shaky foundations, this year the northern tower was scheduled for reconstruction as well. But when construction workers removed the dome from the top of the tower, they discovered a brass tube bearing a message written 183 years ago inside it.

The finding consists of coins, letters and other items from the 17th to 19th centuries. One of the best-preserved relics in the tube was a document dated August 13, 1825 and written in Latin.

While towers are often places where messages for future generations are concealed, there were no such expectations regarding the northern tower of the Church of St. Nicolas, since nothing had been found in the southern tower after it was taken apart last year. If there had been anything to be found, experts predicted, it would probably have been stolen during the 1980s when the tower was repainted.

The artifacts from the tube are now being examined by historians and archaeologists, and will likely be returned to the tower after the reconstruction is completed, together with an additional message for the generations to come.

The church itself, known among the locals as “the Thick Church” (hrubý kostol), is one of the oldest monuments in Trnava. Built in the 11th century as a parish church, it was mentioned in the first document about the town. From 1534 until 1820 it was used as a cathedral church by the archbishops of Esztergom, currently a town on the border of Slovakia and Hungary across the Danube River from Štúrovo. Originally it was built as a small Romanesque church, but as Trnava’s importance grew after it was granted the privileges of a free royal town, the church was enlarged into a Gothic temple.

The interior decorations are not as homogenous as the outer Gothic look of the church, with features of the Baroque and later architectonic styles. For both locals and tourists the most attractive part of the Church is a little Baroque-style chapel dedicated to the Virgin Mary of Trnava, which houses a painting of the Virgin. Legend says that in 1663, when many of Trnava’s inhabitants died of plague, the Virgin Mary depicted in the painting wept for the sorrows of the people. She has been known as the Virgin Mary of Trnava ever since.

The Thick Church, like the other churches in the town, is only open for tourists in the summer season, but it can be entered during the masses that are held every day. If you prefer a walk, the area around the Church of St. Nicolas is a good choice as well. The church is located in the oldest part of the town and is surrounded by quiet streets. Walking to the south from the Church, visitors enter Kapitulská Street with its small park that leads to the Western Slovakia Museum in Trnava. Several hotels with cafés are located in this street, making it a good location for a break to enjoy a cup of coffee before setting out to explore the sights of Trnava again. Only after visiting the town does one realize that there is much more to see than expected, thanks to Trnava’s history, which is becoming ever richer with new findings.

Indeed, the discovery of the message from the past in the northern tower of the Church of St. Nicolas was not the only occasion on which historians have had a reason to celebrate this year. A few days after the message in the tower was discovered, archaeologists found a unique treasure in one of the oldest parts of Trnava, Jeruzalemská Street. The treasure consisted of 114 coins that had been buried for around 700 years. Jozef Urminský, an archaeologist and the director of the Museum of National Geography in Hlohovec, said that the coins probably belonged to a rich citizen who might have wanted to hide them from the soldiers of Matúš Čák Trenčiansky, a noble from Western Slovakia. Čák’s army was threatening the city of Trnava because it had fought with the nobles from Western Slovakia on the side of the Hungarian king, and not of Matúš Čák. The treasure was buried under a house that burned down soon after the money was hidden there.

“We can’t tell whether the owner of the money died, or whether he came back to the scene of the fire and tried unsuccessfully to find his money,” Urminský said. The treasure dates back to the 14th century and has historians and archaeologists hopeful that the recent discovery will be followed by others.

For more information about Trnava and its tourist sights we recommend visiting the tourist information service in the Town Tower: