TIMES and tastes change, and while the Hotel Kyjev’s 15 floors of Brutalist splendour which loom over the heart of Bratislava might not be to everyone’s liking, a not-so silent minority is trying to prevent its demolition and the planned development of the wider Kamenné námestie area. 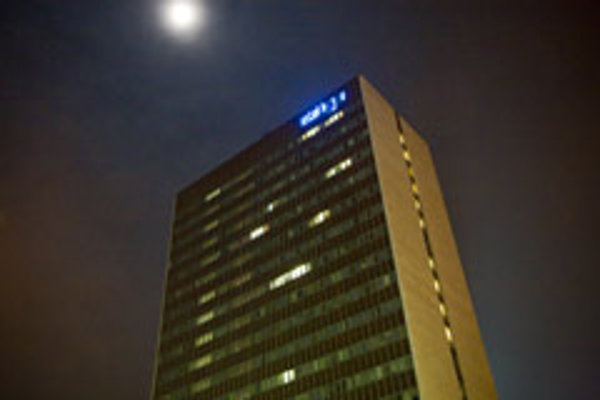 TIMES and tastes change, and while the Hotel Kyjev’s 15 floors of Brutalist splendour which loom over the heart of Bratislava might not be to everyone’s liking, a not-so silent minority is trying to prevent its demolition and the planned development of the wider Kamenné námestie area.

Designed by Ivan Matušík, whose name is synonymous with Slovak modern architecture, the supremely modernist Kyjev was built as part of the later phase of a 1960s development on the outskirts of the Old Town, and was finished in spring 1973.

Thirty-five years later, the exterior wear shows the extent to which the hotel’s maintenance was neglected over the years. With its broken neon sign, peeling travertine facade and shabby-chic interior, the Kyjev is a miracle of Communist dilapidation.

Tourists can be forgiven for not noticing the Kyjev among the Communist tenements that blight Bratislava. Indeed, the building’s most eye-catching element is the gigantic billboard that covers the exterior. Yet beyond its facade, the Hotel Kyjev is magnificent. With its yesteryear charm and cutting-edge retro style, the interior of the Kyjev is a tribute to Socialist modernism and smart, innovative design. From the lobby’s grand spiral staircase, with its pendant pyramid lights, to the curvaceous ‘K’ logo, all of the most remarkable designs were crafted by Matušík’s team, while the name Kyjev, a nod to the capital of Ukraine, acknowledged the pull of the East.

Given that the hotel was built to cater to Iron Curtain statesmen and businessmen who strayed to Czechoslovakia from the West, an opulent atmosphere was essential. However, the Kyjev’s amenities were also made available to the average Jozef, who could sample a new level of sophistication in its exclusive bars and clubs.

Despite the political sobriety of the times, no expense was spared in the Kyjev’s creation, and the attention to detail remains striking. From the sculpted travertine (a sedimentary rock used as building material) where the walls meet the floor, to the rounded dark oak reception furnishings, the Kyjev is alive with inventive, attractive touches that present a stark contrast to contemporary identikit hotels.

Henrietta Moravčíková, head of the Docomomo building preservation group, is leading a campaign to halt a Sk5 billion development project known as Centre Plaza that would demolish the Kyjev and the old Prior department store (now Tesco) and replace them with new buildings. “The Kyjev is part of our history, part of our culture,” she said. “Its architecture represents a period of ambitious and innovative thinking, and we have to do something about [the plans to destroy it]. We have to tell the public about the value of this building and others like it.”

The slowly decaying Kyjev has been on the developer’s hit list for many years, as it occupies a patch of land that, apart from the Old Town itself, is about as prime as real estate gets in Bratislava. Rumors of closure, demolition and redevelopment have circulated for years, to the point that the Kyjev’s employees seem to have accepted the lack of job security as the price of working there. “I think it’s really something very special,” agreed the night porter, Ladislav, echoing my appreciation with his smattering of English.

The developer of the Centre Plaza project is Lordship, a British company based in the Czech Republic that has done projects around post-Communist Eastern Europe. Details of the Bratislava project remain scarce, although the firm’s website speaks of “reconstruction and additional construction” of the Kyjev, which Moravčíková believes means demolition. “That wording is a total euphemism,” she said.

In April 2007, drawings, plans and models were supposed to be released to the public, but as of February 2008, no such information was available. According to information obtained by SPEX, the delay is due to difficulties in purchasing the necessary land from the surrounding residential owners.

Matušík lamented the apparent indifference of the city to his creation. “The interests of business corporations and money far outweigh the social needs of the people”, he said. “Capitalism is driving our social values to extinction.”

One look around Bratislava is enough to give credence to Matušík’s fears. The view from Bratislava castle towards Petržalka will soon be marred by J&T’s River Park development on the bank of the Danube River, while another bland glass monolith, the Aupark Tower, is going up beside the historic Sad Janka Krála park on the south side of the river. While Bratislava city council last year finally approved a master plan to force developers to conform to an overall urban concept, it is clear that developers and landowners still call the shots.

Lordship’s managing director was unavailable for comment for this article. With no press department, and a marketing department that is “not allowed to talk” about the firm’s projects, even the most general information on the developer’s intentions is hard to come by.

Matušík, on the other hand, is not so reticent. He recently christened his new book, Kamenné Námestie, in the Kyjev’s stylish, retro Luna Bar, with its spherical lights and plush velvet furnishings. The book is a visual testament to and an unabashed appeal for the preservation of the original Kamenné námestie and Kyjev project. It also cites many notable Slovak architects, who have echoed Matušík’s plea to save the building.

A dapper figure even at 78, Matušík decried the “reckless profiteering of capitalism” and the “demolishing of our harmonious societies and cities” at the packed venue.

In Bratislava, where buildings go up and come down with little public discourse in between, it seems that little has changed since Communist bulldozers started punching their way through existing buildings and communities during the 1960’s. Then they were in the service of ideology; today they are in pursuit of cash.