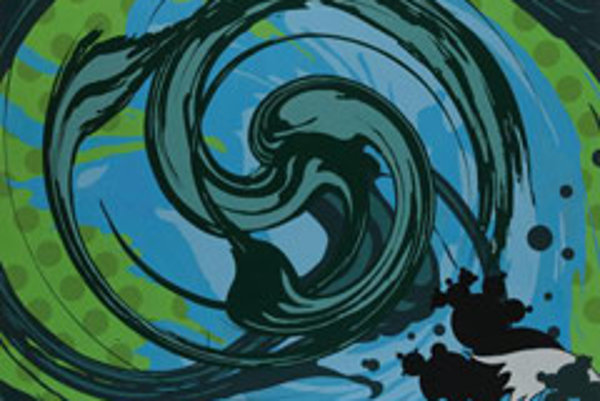 This exhibition presents 17 new large-scale paintings by prominent Slovak painter Ivan Csudai, in which he crosses the border between the natural and supernatural worlds.

On display until April 13.

Lord of the Dance

Michael Flatley’s Lord of the Dance, which has thrilled audiences around the world, is back in Slovakia with its Irish dance show. Due to intense local interest, the organisers added three more shows in Slovakia. After Bratislava, the dancers move to Košice (Steel Arena, May 12) and then return to the capital.

A concert by Balkan musician Goran Bregovič and his Wedding and Funeral Band is part of this festival of dynamic dance and temperamental music. Other performers include the Czech band GipsyCZ and Slovak folk dance and music band Dragúni. Spectators can also look forward to the fiery dancers Todos locos del mundo and a dance fire show.

The 3rd annual staging of this running event offers the choice of full 42 kilometer marathon, a half marathon, a relay, a course for in-line skaters, and a route for children.

Where: Bratislava, starting at Hviezdoslav Square,

The British rock band Uriah Heep returns to Slovakia after (only) five months. After delighting a Košice audience in October, this time the band - which along with Black Sabbath and Deep Purple set the course for rock music in the 1980s - will perform in Bratislava.

As in previous years, the Febiofest film festival, after completing its tour of the Czech Republic, arrives in Slovakia. It will tour eight Slovak towns, bringing to film fans the best from this international film, television and video festival.

Czech film, for example, will be represented by the film Citizen Havel by Pavel Koutecký and Miroslav Jano.

The Slovak section will screen the film Music by Juraj Nvota, a tragicomedy about three musicians living in deep Communism. This film will open the festival.

The festival will also present Romanian films in the New Romanian Film section, including the acclaimed film 3 Weeks and 2 Days by Cristian Mungio.

This year, the festival focuses on the work of English director Alan Parker, Hungarian director István Szabó, and an actress with Slovak roots, Pola Negri.

The festival will also present documentary films as well as art films to be screened in film clubs.

For more about the festival,

dates and films, go to www.febiofest.cz

This Turkish dance group arrives in Slovakia with a magical dance show based on the culture and history of Anatolia, mixing the modern, oriental and folk dances of this region.

Former child prodigy Dalibor Karvay has grown up into an excellent violin player. This time he performs with the Golden Violin orchestra.

Where: House of Art, Košice

A monumental and spectacular performance of one of the most popular operas in the world, to be performed by a 155-member art ensemble.

This film festival takes place within the Days of French Culture in Košice.

The flamenco-influenced Gipsy Kings band gives two concerts in Slovakia. At these concerts, the Slovak Gypsy Devils will also be heard.

This English band offers music that combines influences from trip hop, rock, rhythm and blues and pop. It is on tour to promote its latest album, Dive Deep.

Zucchero back in Bratislava

Zucchero, an Italian singer named Adelmo Fornaciari who goes by a stage name that means sugar, is probably best known internationally for his hit song Senza una donna (Without a Woman). He returns after almost one year to sing in the capital on his spring European tour in support of his All The Best album.

The world-renowned Italian tenor gives his only concert in Central Europe.

The sensational Russian Cossack State Dance Company, a world-class company of 40 dancers, musicians and singers with a dynamic and breathtaking production, arrives in Slovakia on tour. It will both dazzle and delight audiences in four Slovak towns with the amazing feats of highly skilled, acrobatic Cossack dancers .

The world-known singer and composer returns to Slovakia for the third time. This time Hughes, who played with bands like Trapeze and Deep Purple, will introduce here his latest album.

Musicians from the bands Yes, King Crimson, Emerson Lake & Palmer, Hold The Ladder, Uriah Heep, U.K. and The Buggles formed this band in 1981. Last year its members got back together for a world tour with a playlist full of their biggest hits like Heat of the Moment or Only Time Will Tell.

The Infamous Stringdusters and Meantime

A double concert by a top bluegrass US band, a sextet from Nashville, and the Slovak Meantime.

The first and only concert in Slovakia by this heavy metal legend in the original lineup featuring Rob Halford.

American singer, composer and multi-instrumentalist Lenny Kravitz will play from his latest album It Is Time For A Love Revolution, combining classical rock riffs with soul, funk and jazz.

Guitar magician Carlos Santana will arrive in Slovakia to give his first concert in this country within his Live Your Light Tour. Santana will play his biggest hits including Black Magic Woman, Smooth and Maria Maria.

This English rock legend, which bassist Alan Lancaster and guitarist Franciso Rossi launched in 1962, plays in the Slovak capital on a tour to promote their latest album, In Search of the Fourth Chord.

Robert Doisneau, or A Picture of a Certain France, is an exhibition of a unique selection of 53 black-and-white photographs that the world famous French photographer took between 1945 and 1960. Doisneau, who along with Henri Cartier-Bresson is considered the most famous French photographer in the world, is known for his depictions of street life in Paris. Among his most popular photos is the Kiss by the Hotel de Ville.

The exhibition lasts until March 30.

Design and Handcraft from Finland

This exhibition presents the contemporary works of arists from the Finnish craft organisation Taito.

The display lasts until May 17.