Getting closer to lifting US visas

INTERIOR Minister Robert Kaliňák met US Secretary of Homeland Security Michael Chertoff in Washington, DC, on March 18 to sign a Memorandum of Understanding that confirmed both sides' commitment to abolishing tourist visa requirements for Slovaks. 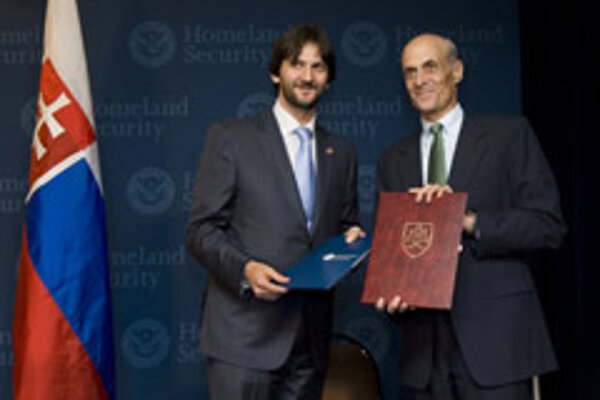 INTERIOR Minister Robert Kaliňák met US Secretary of Homeland Security Michael Chertoff in Washington, DC, on March 18 to sign a Memorandum of Understanding that confirmed both sides' commitment to abolishing tourist visa requirements for Slovaks.

The Memorandum is similar to an agreement concluded a few weeks ago between the United States and two other countries that entered the European Union in 2004, the Czech Republic and Estonia. Two more countries from that group - Hungary and Lithuania - joined Slovakia in signing similar agreements.

According to the ČTK newswire, Chertoff told journalists afterwards that he is not concerned about Slovakia's visa rejection rate, which still stands two percentage points above the 10 percent maximum allowed for acceptance into the Visa Waiver Program (VWP). He said he fully expects Slovakia's rejection rate to fall to 10 percent, or below, by the end of the year.

"I think there's every possibility that we may see citizens from the Slovak Republic coming into this country without visas later this year, which I think will be a very, very, very, very good day," Chertoff said.

The declining number of rejected visas applications was confirmed by US Ambassador Vincent Obsitnik, who met with Slovak President Ivan Gašparovič on the same day.

"Last year it was less than twelve percent, so the trend is decreasing," Obsitnik said.

Gašparovič welcomed the prospect of Slovakia joining the VWP.

"It is such a good signal for our citizens, especially young people, that they will be able to travel to the US under slightly different conditions than now," he told journalists after the meeting.

Kaliňák said in Washington that the Memorandum included a pledge by both countries to respect domestic laws and international treaties, including Slovakia's obligations to the European Union.

"Slovakia is prepared to fulfil all security measures so that nothing prevents our US partner from waiving the visa duty for our citizens, so we balanced both sides' concerns," Kaliňák said.

The Memorandum laid out the specific steps that will accomplish this. Slovakia promised to implement the security precautions the US requires, but did not commit to a timeframe.

But even when the visa requirement for Slovaks is dropped, a new US law passed last August will still require Slovaks, as well any citizen of a VWP country who's flying to the US, to obtain a travel authorisation number online.

Other security precautions include biometric passports, which Slovakia has already started issuing. US representatives downplayed concerns that the information stored in them could be abused.

"We agreed on what kind of information will be asked for," Ambassador Obsitnik said after the meeting with Gašparovič, as quoted by the STV public TV channel. "It will not be abused, but rather just serve to verify whether the passenger is a terrorist."

While on his way back from Brussels on March 18, Prime Minister Robert Fico warned that the Memorandum will not open the door to immediate visa-free travel, according to the Aktualne.sk news website.

"This is a political agreement," he said. "A resolution will take several more months to be completed."

Slovakia, as well as the other non-VWP EU countries, started negotiating directly with the US after EU representatives agreed at a meeting in Brdo, Slovenia that member states should be allowed to do so individually.

The countries' entry into the VWP would create more of a balance in how the programme is applied toward members of the EU. For example, older members of the EU, except Greece, are already in the VWP, while all countries that joined the EU in 2004 are not, except Slovenia.