FACING a rebellion from its Bratislava region branch, the national leadership of the opposition Slovak Democratic and Christian Union (SDKÚ) has taken the unprecedented step of abolishing the entire organisation and building it again from scratch. 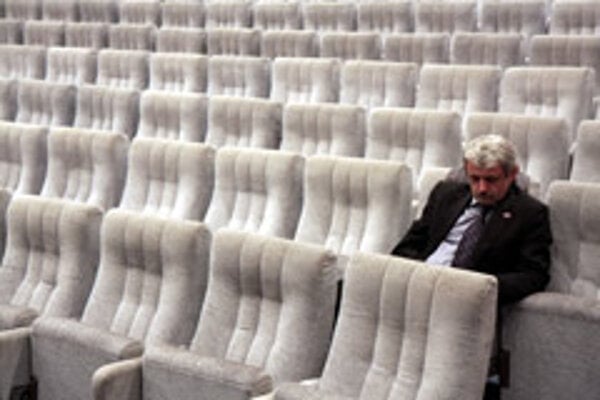 Chairman of the Slovak Democratic and Christian Union Mikuláš Dzurinda is facing calls for his resignation. (Source: SITA)
Font size:A-|A+

FACING a rebellion from its Bratislava region branch, the national leadership of the opposition Slovak Democratic and Christian Union (SDKÚ) has taken the unprecedented step of abolishing the entire organisation and building it again from scratch.

Following an extraordinary meeting of the SDKÚ national council on March 19, party leader and former PM Mikuláš Dzurinda reported that the council had decided that "the party's existing structure in Bratislava [region] is dysfunctional and is violating our rules". The vote to abolish the Bratislava wing was one vote short of unanimous.

The party's leaders had already voted in favour of expelling the signatories to a Bratislava SDKÚ challenge to Dzurinda's rule three days earlier. The challenge, published in the form of a petition called "The Time for Change Has Come", was signed by some of the party's most powerful local politicians in the Slovak capital.

Dzurinda and his No. 2 in the party, former finance minister Ivan Mikloš, said they had decided to expel the rebels partly because they had broken party rules calling for internal disputes to be aired behind closed doors, and partly because they believed the rebels were working together with the ruling Smer party to destabilise the SDKÚ.

"What were we supposed to do, just watch as the party was torn apart?" asked Dzurinda at a press conference following the council meeting.

Mikloš claimed that SDKÚ Bratislava deputy chairman Branislav Zahradník had recently been seen in the company of Ivan Kmotrík, a media entrepreneur who is regarded as a sponsor of the Smer party. The lawyer representing the Bratislava group, Dušan Repák, has in the past represented Kmotrík, who when interviewed by the SPEX magazine in November 2005 introduced Repák as "my lawyer".

However, the dissidents claimed that the party's leaders were merely showing how intolerant they had become to opposing voices. "Mikuláš Dzurinda has just proven that differing opinions are punished in the SDKÚ," said Valentín Mikuš, the former chairman of the SDKÚ's Bratislava wing. "He has punished the whole of Bratislava by dissolving these local structures."

Mikuš said that while the group's original challenge had not demanded Dzurinda's removal, "now I can say out loud that he should quit as leader because of what he is doing."