IN THE MIDST of moves to liberalise the European postal services market, the Slovak Post has been handed a new shield to protect it from growing competition. Earlier this year, parliament revised the law on postal services to ensure that competitors do not cherry-pick clients from the state-owned postal company's monopoly. 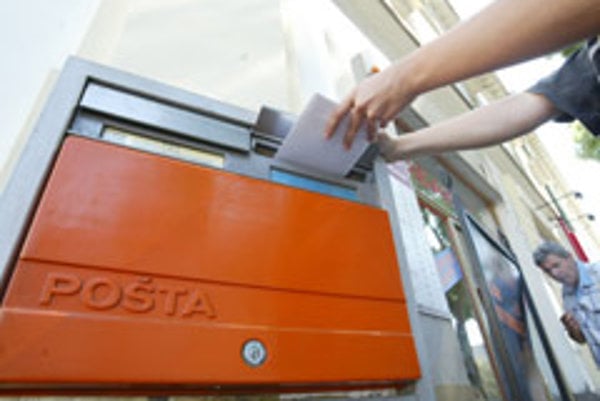 Hybrid mail can only be delivered by the Slovak Post. (Source: Sme - Mirka Cibulková)
Font size:A-|A+

IN THE MIDST of moves to liberalise the European postal services market, the Slovak Post has been handed a new shield to protect it from growing competition. Earlier this year, parliament revised the law on postal services to ensure that competitors do not cherry-pick clients from the state-owned postal company's monopoly.

The government said the revision was necessary because there was far too much room for interpreting what types of consignments the Slovak Post has the exclusive right to deliver. Private postal service providers criticised the legislation as at odds with European Union practices and said it only further deforms the market.

At the core of the problem lies so-called 'hybrid' mail, which is produced when content is transmitted electronically and then printed, put into envelopes and delivered to the addressee. The alternative delivery companies say that the revision of the law moves hybrid mail to within the Slovak Post's monopoly, while the state and the Slovak Post say it has always been there.

"Hybrid mail or rather part of it - the actual delivery of consignments - will not become part of the exclusive right to deliver from April 1, because it has actually always been part of it," said Andrea Pivarčiová, spokeswoman for the Slovak Post. "That part of the hybrid mail where the content is transmitted electronically, printed out, put into envelopes and the address is attached remains open to competition."

Private firms, which say that the move is at odds with the EU directive, are either not familiar with the situation in European Union countries and the wording of the last European Commission directive, or are intentionally misleading the public, Pivarčiová told The Slovak Spectator. Slovak Post's exclusive right to deliver consignments up to 50 grammes - it's so-called monopoly - remains unchanged, she added.

The bill originated with the Slovak National Party (SNS), who said that alternative postal service providers had been picking off the Slovak Post's most profitable clients for mail delivery up to 50 grammes, and were thus violating the Slovak Post's exclusive right to deliver. SNS deputies said that the measures they proposed will limit loopholes in the legislation.

If no change had been made, the Slovak Post would have continued to lose a significant part of its income from services falling within the monopoly. These developments could have led to an increase in delivery prices, with a major impact on public and state administrative bodies, the SNS deputies wrote when they submitted the bill.

The deputies said that some had interpreted the existing legislation to mean that hybrid mail prepared and distributed by an external supplier need not be considered a postal consignment, and hence fall under the Slovak Post's exclusive right to deliver. Without changing the legislation, the most profitable hybrid mail would have been taken by alternative postal service providers, the SNS deputies' report said.

"By this decision, the Slovak government has strengthened the monopoly of the Slovak postal service, [a move] which unambiguously goes against current developments in the postal services markets in the European Union," Václav Friedmann, spokesman for private postal operator TNT Post told The Slovak Spectator.

In all the European Union countries where the postal market was gradually opening up to private carriers postal services have improved, and not only in terms of mail delivery but most importantly in terms of the price paid for mail delivery, said Friedmann.

"We view the Slovak government's step as a step backwards," Friedman added.

According to Friedmann, TNT Post Slovensko will lose the option to do business in the hybrid mail market segment, while the delay in liberalising the postal market will limit the business of all private postal service providers.

"It of course brings financial losses, but what is more important is that neither the market nor private postal service operators will develop further," Friedmann said.

He also said that in such an environment the Slovak Post will neither have the motivation nor make the effort to improve its services, as it would have to in a competitive environment.

TNT has been analysing the situation and believes that the Slovak parliament's decision will be a strong enough reason for European Union bodies to take action.

The Ministry of Transport and Postal Services stands firmly behind the Slovak Post and said that statements by alternative operators are misleading.

"The revision to the law on postal services does not change the definition of the exclusive right to delivery," Mariaán Jánošík, the ministry's spokesman told The Slovak Spectator.

"It is only a way to make it more exact," he said.

The EU plan originally intended for the market to be liberalised by January 2009, though this has already been adjusted to 2011. The European Union allows new member states to keep their markets protected from wide-ranging competition until 2013.

The Slovak Post said it has expenses that private operators simply do not face.

The so-called exclusive right to deliver is a form of compensation for the expenses the Slovak Post incurs by fulfilling its obligation to provide a universal service, i.e. collecting and delivering consignments on every working day to every address in Slovakia at affordable prices, Pivarčiová told The Slovak Spectator.

"It is clear that the combination of advantages and obligations which the universal service would bring to them is not exactly what they are interested in," Pivarčiová said.

According to Pivarčiová, the Slovak Post views the decision to delay liberalisation positively, mainly because the European Commission has not yet managed to find an unambiguously suitable method to compensate for the expense of providing a universal service and thus finance the service for the wider benefit of the public.

However, Friedmann said that in all countries that have decided to liberalise their postal market, the quality of postal services has improved.

"I would compare it to the entry of mobile phone operators to markets where before only a single operator had been operating," Friedmann told The Slovak Spectator. "Thus delaying the liberalisation is bad news, especially for citizens of countries where monopoly postal service operators will continue operating without competitive pressure to improve their services. Liberalisation should happen in the shortest possible time because delaying it is counter-productive."