HARD, sharp, fragile. Transparent, colourful, painted, laminated, glued. Mirrored, as well as matt. All of these adjectives can be applied to the impressive works in glass being exhibited at the Slovak National Gallery (SNG) in Bratislava. 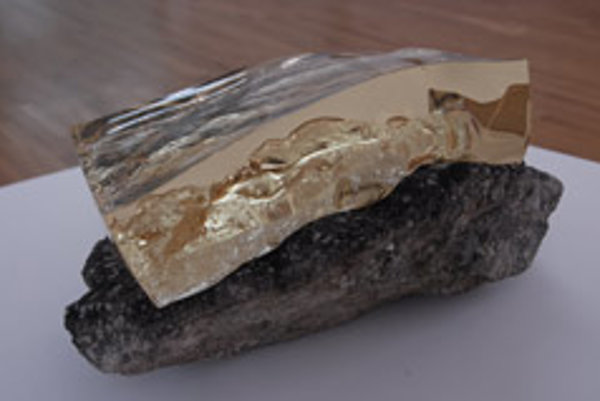 HARD, sharp, fragile. Transparent, colourful, painted, laminated, glued. Mirrored, as well as matt. All of these adjectives can be applied to the impressive works in glass being exhibited at the Slovak National Gallery (SNG) in Bratislava.

Czech and Slovak Glass in Exile is an updated version of an exhibition prepared in 2007 for the Moravian Gallery in Brno, in the Czech Republic, under the curatorship of Sylva Petrová, an internationally recognised authority in the field of modern glass design. She is currently a professor at the University of Sunderland in Great Britain.

"Along with music, Czech and Slovak glass has been among the most famous cultural activities of our countries since the Middle Ages," said Petrová, introducing the exhibition in Bratislava. "Nothing has made us as famous as our glass."

She referred in particular to the years after 1945, when Czech and Slovak glass artists crossed the divide between applied and free glass art.

"They outstripped the development of glass art in other countries," said Petrová. "For example, compared to America by about seven years, and with other territories it was by as much as decades."

After Petrová had devoted many years to studying glass art in the Czech and Slovak republics - with the focus on her Czech homeland - she realised how little knowledge there is here about developments which have occurred abroad thanks to those artists who fled the country or spent at least part of their lives abroad. For two years she intensively studied the integration of Czech and Slovak glass into the world context. This work culminated in the exhibition at the Moravian Gallery.

"This is a unique exhibition, unlike anything that has been seen here before and which will not be repeated for several decades," said Petrová. It displays the oeuvre of significant Czech and Slovak artists from the 1960s to the present. Apart from being active beyond the borders of the Czech and Slovak Republics as artists, many of them participated in the development of glass art, taught, and launched glass centres.

"Ján Zoričák [ed. note: Yan Zoritchak in France] was a consultant to the French government; Miloslava Svobodová established the education of glass art in Belgium and nurtured three generations of glass artists," said Petrová. "Stanislav Meliš has taught glass art in Australia and helped to raise there a completely professional class of glass artists."

Following on from a previous successful collaboration with the Slovak National Gallery, the exhibition moved to Bratislava. The display in the Esterházy Palace comprises almost 100 works by 27 artists living in seven countries on three continents.

"Glass exhibitions are always demanding, in terms of transport and insurance," said Petrová. For the exhibition it was necessary to transport works from Germany, France and Belgium, but also from countries as far away as the United States or Australia, she said.

Vladimíra Büngerová selected the works by Slovak artists for the exhibition in Bratislava from the SNG collection and from works owned by the artists themselves.

"The SNG has a unique collection of glass artworks by people who fled the country," said Büngerová. "This exhibition shows what a contribution their work has made."

Artists presenting their works at the exhibition also include Zora Palová, who has also taught at Sunderland University, helping to build its modern glass centre. Other well-known names include Pavel Tomečko, Václav Cigler, Patrik Illo, Petr Sís, Milan Vobruba, and Vladimíra Klumparová, to mention just a few of the 27 exhibiting artists.

The exhibition shows the differing methods the artists picked when transferring their ideas into such a versatile material as glass to create their sculptures, objects, and installations. Their artworks are, for example, made of cast, ground, laminated, polished, glued, sandblasted, and slumped glass.

What: Czech and Slovak Glass in Exile