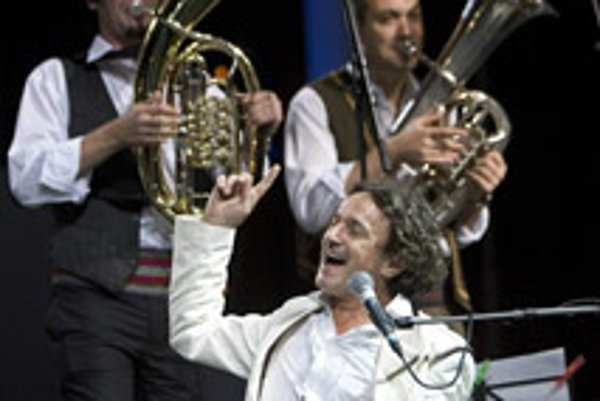 MUSIC: A CONCERT by Balkan musician Goran Bregovic and his Wedding and Funeral Band is part of the Enlivened Dances dance show, which takes place in Bratislava on March 28. Other performers at this event of thrilling dancing and passionate music include Czech band GipsyCZ and Slovak folk dance and music bands Dragúni and Muzička. The audience can also look forward to the fiery dancing of Todos locos del mundo, as well as a fire dance show. The show takes place in the Sibamac Arena (the National Tennis Centre) at Príkopova 6 starting at 18:00. Tickets cost Sk500 to Sk1,200. For more information, call 02/4341-3145 or go to www.ozivenetance.sk.

MARATHON: Bratislava City Marathon - The 3rd annual staging of this event offers the choice of a full-length, 42-kilometre marathon course, a half marathon, a relay race, space for in-line skaters and a route for children.

Runs: March 28-30, starting at 10:00. Starting at the Hviezdoslavovo Square. www.bratislavamarathon.sk.

LIVE MUSIC: Uriah Heep - The British rock band Uriah Heep returns to Slovakia after five months. After delighting a Košice audience in October, this time the band - which along with Black Sabbath and Deep Purple set the course for rock music in the 1980s - performs in Bratislava.

LIVE MUSIC: Tants Klezmer! - This double bill of klezmer bands - the Pressburger Klezmer Band, from Slovakia, and the Létající Rabín, from the Czech Republic - is combined with a klezmer dance workshop led by Leon Blank, from Sweden.

EXHIBITION: Europe about Bulgaria - This exhibition marking the 130th anniversary of Bulgaria's liberation from the Ottomans presents priceless historical maps and atlases, the oldest of which date back to the mid-third century.

WINE TASTING - Wine lovers can taste local vintages to be exhibited at the Wine Market 2008.

EXHIBITION: AFTER the success of the previous Pecha Kucha Night, which made gallery space available to artists who wanted an informal forum for their work, more events like it are being prepared across Slovakia this year. On March 28, the Stanica Žilina Záriečie open cultural space will host the Pecha Kucha Night Žilina, which is the first of five events. Sandra Kubániová and the Kachuna civic association, which is licensed to organise the event, are especially interested in highlighting the work and unique perspective of artists from Žilina. Each of the selected architects, graphic and product designers and visual artists will have six minutes and 40 seconds to introduce their projects. The artists who are presenting their work at the first evening include graphic designer Pavel Choma, visual artist Anton Čierny, chemist Peter Kasák, designer Peter Bohuš and marionette actors Hanka Lukšů and Tomáš Hudcovič. Tickets cost Sk60 and Sk100. For more information, go to www.pechakucha.sk or www.stanica.sk.

CLASSICAL MUSIC: Chamber Concert - This concert by pianists Magdaléna Bajuszová and Václav Mácha and violinist Jindřich Pazdera is part of the Violin Workshop.