A flirtatious Easter of water and whipping

MY first Easter Monday in Slovakia started with the sound of my boyfriend laughing, just before he startled me out of my peaceful slumber (spánok) by splashing cold water into my face. 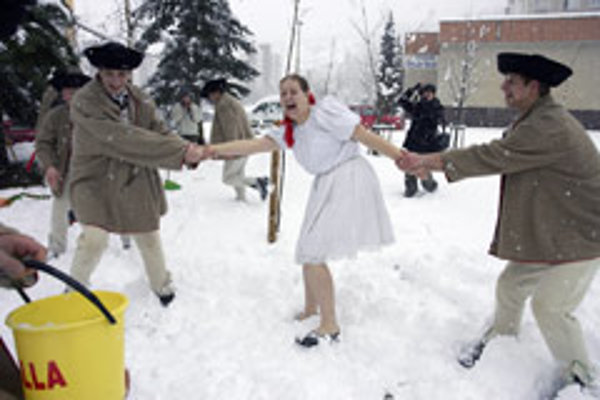 Easter in Slovakia is actually all about flirting, this author thinks. (Source: SITA)
Font size:A-|A+0

"Happy Easter!" he shouted gleefully, while tapping me with a willow switch (korbáč). A playful chase ensued.

"This is Easter?" I thought to myself. "Where's the Easter bunny? And what about my basket of goodies (košík plný dobrôt)?"

But in the years since that crash course in Slovak traditions, I've become much more familiar with how the holiday is celebrated. On Easter Sunday mothers and daughters spend all day baking cakes and making Easter eggs decorated with scratched-out paint designs or patterns from starch-hardened lace. Sunday is also a day when families can visit each other without the girls having to be afraid of an "attack".

On Easter Monday, men of all ages visit their relatives, friends, or classmates, carrying a switch made of braided willow branches. At each home they douse (oblievať) women with water and "whip" (šibať) them with the switch. In return, the women tie a decoration on the whip, or reward the men with shots of spirits, painted eggs, sweet treats, or money.

Tradition states that spring and Easter are about re-birth, celebrating having survived the winter and welcoming the season of fertility. So splashing women with water symbolically rejuvenates (omladiť) them and makes them more beautiful. The whipping confers the power of the willow tree on the women, allegedly increasing fertility.

I have to admit that I originally had a lot of reservations about an ancient tradition in which women, having slaved over hot stoves the entire holiday weekend, are then beaten and doused and expected to reward men with gifts for the privilege.

But my shock has dissipated as I've come to understand that it's all about flirting. As a teacher in high schools I witnessed boys dousing girls much earlier than the official Monday morning. It reminded me that springtime is for lovers and made me realise that this was nothing more than a sanctioned (povolený) expression of attraction. And, to boys' endless amusement, it even supplies tools for wooing the woman.

The boys probably think, "I don't have to write a poem, buy flowers, or speak a word. Just splash, whip and giggle!"

Some of my students told me that they don't like the holiday and won't participate. This view that the Easter tradition is not sacred and can be changed is held by many people throughout Slovakia. There are places where you don't witness these shenanigans (neplechy), where these traditions have been supplanted by others, such as the Easter egg hunt.

But as Slovakia continues to carve its niche (zaradiť sa, nájsť si svoje miesto) in the European Union, I think these unique traditions will become even more cherished. At the same time, they may have to be modified as increasing numbers of young women such as my female high-school students opt out.

So as I awoke to the sprinkling of water and laughter this year, I felt the flirtatiousness of the season. I have a couple of words to the wise, though: don't drink and whip because accidents can happen and, in a nod to the new sexual harassment laws, recognise that everyone has the right to abstain from these activities.