Seven sins of the Press Code

ALL SLOVAKIA'S major daily newspapers were published with blank front pages on Thursday, March 27, in protest of the government's controversial attempt to revise the Press Code. Their covers each featured just a short, identical notice to readers listing their most serious objections to the proposed Press Code, which has attracted criticism from both Slovak publishers and the international community. 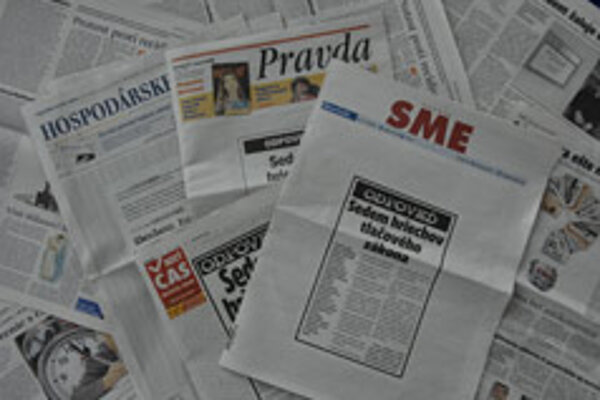 ALL SLOVAKIA'S major daily newspapers were published with blank front pages on Thursday, March 27, in protest of the government's controversial attempt to revise the Press Code. Their covers each featured just a short, identical notice to readers listing their most serious objections to the proposed Press Code, which has attracted criticism from both Slovak publishers and the international community.

The papers - Sme, Pravda, Hospodárske Noviny, Nový Čas, Plus Jeden Deň and Új Szó, which are all members of the Periodical Press Publishers' Association - printed the same text under the headline "Seven sins of the Press Code".

"Do you want someone other than the editors to prepare your favourite newspaper for you?" asked the dailies in their protest statement. "The new Press Code from the workroom of the governing coalition is heading in this direction."

According to the publishers, the law creates unreasonably wide scope for the right of reply and correction, thereby crudely intervening in the autonomy of editors' work and violating the democratic principles of the press, the rights of citizens and press freedom.

The statement lists the major objections of the press to the code, which among other things grants a right of reply even in cases where the information printed was correct, and the right to correction even if the published information has not maligned anyone. The publishers also argue that the press code allows for double sanctions, namely being obliged to print both a correction and a reply.

The publisher would be responsible even for replies which are at odds with the law and morals, which could result in a chain of requests for replies, according to the Slovak publishers. State and public institutions would also enjoy a right of reply which, according to international organisations, creates room for abuse. However, the editorial office cannot respond to a printed reply, which goes against the country's constitution. Furthermore, the publisher cannot refuse to print a reply without risking a fine of Sk150,000.

"We do not want to publish newspapers that are not interesting for the readers and violate their rights," the publishers said. "This is why we consider it unavoidable to use the cover pages of our newspapers for the protest."

The press was reacting to the proceedings of the parliamentary media committee, which on March 26 made only cosmetic changes to the Culture Ministry's draft press code. This was despite an earlier promise by the government to leave out parts which met with the most serious objections.

The Organisation for Security and Cooperation in Europe (OSCE) press freedom representative, Miklós Haraszti, who has been critical of the draft press code from the very beginning, said it is disappointing that recommendations regarding the right of reply were not implemented.

"As it stands now, the law would still fail to comply with Slovakia's OSCE commitments to protect media freedom," Haraszti said in an official OSCE release.

"With the help of Slovakia's parliamentarians the draft can still be improved," Haraszti said.

Haraszti also said that his office stood ready to assist the government and the parliament. However, the Slovak Culture Ministry said that the code has met the standards.

The ministry said it had no sympathy for the publishers' protest.

"The fact that the dailies came out with blank cover pages because of the press code has not surprised us at all because in the dispute over some of the articles of the draft code the dailies and the publishers are interested parties," Jozef Bednár, the spokesman of the Culture Ministry, told The Slovak Spectator.

According to Bednár, the way the publishers reacted goes to show that they only publish one-sided information.

"Regarding the published 'Seven sins of the Press Code', I need to add that we consider the right of reply a strengthening of democracy and the right of citizens," Bednár said. "The publishers will have the option to freely decide not to publish the reply if they are convinced that the published information has not violated anyone's rights or if the publishing of the reply would violate laws."

According to Bednár, only a court can penalise the publisher while the government and parliament cannot demand to have a reply published.

Miloš Nemeček, chairman of the Periodical Press Publishers' Association said that the main problem of the draft code is that it includes both the right to correction and the right of reply.

Though the current press legislation includes the right to correction it applies only in cases when the published information both contains factual mistakes and violates the rights of an individual at the same time, Nemeček said.

However, based on the current draft code the right to correction arises in every case of minor inaccuracy, even if it does not injure anyone's dignity, he told The Slovak Spectator.

Nemeček also said that in the case of the right of reply it is enough that someone has a subjective feeling that their rights have been violated - even where the information published is true - for the person to demand such a reply.

"The code might create pressures on publishers and journalists which might result in self-censorship in order to avoid sanctions," Nemeček said. "Simply, the code would not create an atmosphere which would be friendly towards press freedom, a basic pillar of democracy."

Rastislav Kužel, a representative of the non-governmental media watchdog MEMO 98, said that restrictions on media content should not be part of any press law, but should be dealt with solely by the criminal or civil codes.

Kužel also said that the current draft contains some vague formulations while the "right of reply could be considered as impermissible interference with editorial independence as it could grant politicians and others endless access to newspapers."

While it is true that two provisions of the draft code were "inherited" from amendments to the current Press Code made by the previous government back in 2000, it was the incumbent government which introduced a clause prohibiting incitement to hatred on eighteen different grounds, including "political and other thinking," said Kužel.

"This would mean that for the first time since 1989, someone could be penalised for his or her political opinion," Kužel told The Slovak Spectator. "The combination of such media content restrictions as well as the fact that it would be the Ministry of Culture imposing fines for breach of these rules could lead some journalists and publishers to exercise self-censorship."

Kužel recommends reducing the right of reply and correction to a single instance, to be used only if the claimant demonstrates a justified interest in correcting a false or misleading fact published by a newspaper.

Meanwhile, Rafael Rafaj, who leads the parliamentary caucus of the Slovak National Party (which is part of the governing coalition), told the Sme daily on March 27 that there is some agreement - though he did not say by whom - with the Culture Ministry that there might well be some scope and reason to reopen the law in six months if it is frequently abused.

However, political scientist Miroslav Kusý regards as problematic the fact that even before the legislation has been adopted its creators are already assuming that it might later require amendment.

"The point is that the law should be as exact as possible," Kusý told The Slovak Spectator.

Kusý welcomed the protest of the publishers.

"It is a significant turn since the publishers are taking issues into their own hands and have started talking in their own name," he said. "It is no longer only a political tug-of-war but becomes a public issue."

Under the administration of Vladimír Mečiar, newspapers appeared with blank cover pages twice: to protest against the government's efforts to increase value added tax on the periodical and non-periodical press.

Mečiar, the chairman of the Movement for a Democratic Slovakia (HZDS), told Sme Online that the protest was ridiculous.

"What effect has it had? None," said Mečiar. "If the publishers want to fill their empty pages they can extend it to the whole issue."

However, Kusý said that in the same way that protest was effective in the times of Mečiar, it would be effective even now.

"In the long run, the current ruling coalition has no chance in a fight against the media," Kusý said. "No power can afford that in the long run. They can take one-time measures to restrict media freedom but [the media] would necessarily hit back."