Changes at the top of U.S. Steel Košice

ONE of the biggest companies in Slovakia has a new president. 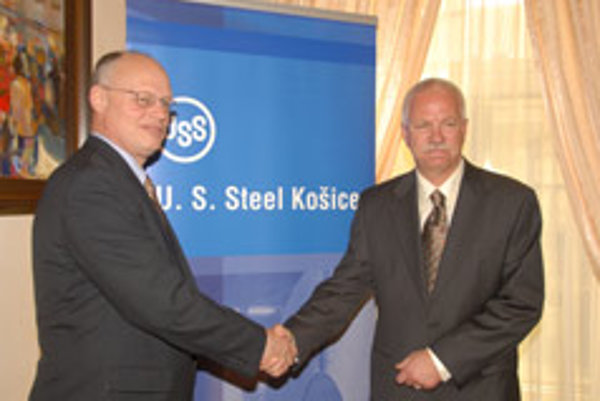 ONE of the biggest companies in Slovakia has a new president.

Babcoke is the fourth president of USSK since the American corporation took over the steelworks in 2000.

At a press conference in Košice on March 19, Babcoke said that the company's goals over the next few years will be to improve occupational safety to a zero injury rate, continue investing in ecology and pursue opportunities for strategic growth as a whole.

Babcoke also said that last year's capital investment of $160 million in the hot-dip galvanizing line was the largest investment by an American corporation in Europe. The line, which has the most up-to-date technology available for zinc-coating of steel, has already produced results beyond expectations since its launch last September, he said.

"We want to offer our customers an even wider product range," Babcoke said.

He stressed that the USSK's greatest asset is its workforce, so the company will continue investing in education and training, with the aim of providing an incentive for the most experienced to stay at the steelworks.

Under Babcoke's leadership, USSK management intends to pay more attention to efficiency and labour productivity. The new president acknowledged the progress made by USSK since 2000, when the Košice steelworks was acquired by the U.S. Steel Corporation. He said that Košice has served as a model for the company's subsequent acquisitions in North America and in Serbia.

Specifying that steel production by U.S. Steel has risen in the last eight years from 12 million to 31 million US tonnes (1 US tonne = 0.907 metric tonnes), he said: "The developing market in Europe has acted as a catalyst for growth in the Corporation's results."

David Lohr is returning to U.S. Steel headquarters in Pittsburgh after almost three years in Košice to take up the position of Senior Vice President-North American Flat-Roll Operations.

He said at the press conference that he considers U.S. Steel's European operations to be "a successful segment which has aided the growth and progress of the whole Corporation." He then went on to outline his short-term vision for the Košice works, as follows: "In three to five years from now I see U.S. Steel Košice as a stronger, more competitive company with customers who choose us for our reliability and quality."

USSK produces an annual average of five million US tonnes of steel, which is almost a five percent share of total European steel production. At present, the Košice-based company and its subsidiaries employ approximately 14,500 people.

Between September 2000 and 2006, USSK's parent company invested more than $700 million in the steelworks, which was part of the ten-year commitment it made when it took over Východoslovenské Železiarne (VSŽ) in 2000. Investment is planned to continue at a similar rate in the coming years.

George F. Babcoke, a native of Northwest Indiana, began his career with U.S. Steel in 1976 as a labourer in the Gary Works' general services department. After working in various positions, he was appointed Vice President-Plant Operations in 2005 and was responsible for overseeing all of the company's operating facilities in the United States. He assumed his current position on March 1, and is responsible for operations at U.S. Steel's two European locations: U.S. Steel Košice and U.S. Steel Serbia.