THE CASTLE is one of the most distinctive features of Bratislava's skyline, and a favourite destination for tourists. The place exudes history - the Crown Tower, for instance, is one of the oldest buildings in the city - but, in spite of this, books about the castle are relatively few. A recent addition is Príbeh hradu/The Story of the Castle in Bratislava by Adela Markovich and Jana Hutťanová. Written half in Slovak and half in English, it was published by Kala last year to fill what the company saw as a gap in the market. 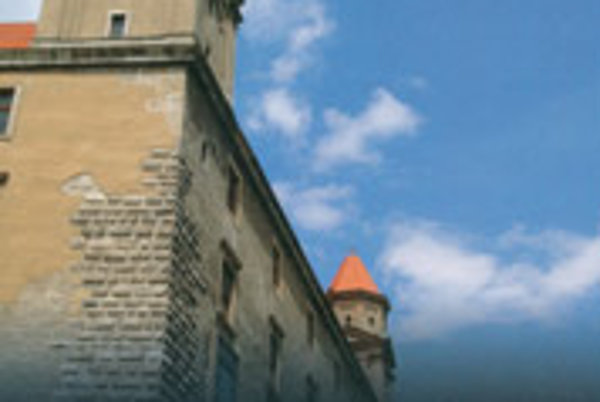 THE CASTLE is one of the most distinctive features of Bratislava's skyline, and a favourite destination for tourists. The place exudes history - the Crown Tower, for instance, is one of the oldest buildings in the city - but, in spite of this, books about the castle are relatively few. A recent addition is Príbeh hradu/The Story of the Castle in Bratislava by Adela Markovich and Jana Hutťanová. Written half in Slovak and half in English, it was published by Kala last year to fill what the company saw as a gap in the market.

The book, which features more than one hundred images by various photographers as well as historical paintings, graphics, documents, and maps, tells the story of the castle, and its close connection to the history of the city, in an non-traditional, less formal way. The reader follows a visitor who, attracted by the castle's unusual silhouette, walks up the hill towards it and is met in one of its courtyards by a mysterious woman. She tells its story, spiced up with some legends and a range of curious facts about the place.

The reader learns that history of the castle probably dates back as far as the Upper Palaeolithic period, when people first settled the area. Since then the castle hill has been continuously inhabited. At one time the Celts occupied it; later the Romans made use of the site, leaving their mark in the form of a relief depicting the torso of a Roman figure. The first confirmed written reference to Bratislava dates from 907 A.D., when Bratislava was the site of a military confrontation.

During the following centuries the castle and the town beneath it have experienced periods of prosperity as well as decline. One upswing arrived with Queen Maria Theresa, who ordered its rebuilding in the Baroque-Rococo style. This left the gardens arranged in a style similar to those at Schönbrunn Palace in Vienna. The works also included construction of a winter hippodrome and an orangery.

Her son-in-law, Albert of Saxony-Teshen, who married her favourite daughter Maria Christina in 1766, started his famous collection of artworks at Bratislava Castle. This is now housed at the world-famous Albertina gallery in Vienna; but while he and his wife lived there, paintings by masters such Titian, Dürer, Rubens, Cranach and Tintoretto, hung on the walls of the castle.

The death of Maria Theresa in 1780 almost spelled the end for Bratislava Castle as well. Her son Joseph II moved all his offices to Buda, ending Bratislava's period as the capital of the empire.

Afterwards the castle served first as a school of theology, and then as a barracks, turning the one-time home of emperors into a home for soldiers.

A fire on May 28, 1811 - allegedly started by some careless soldiers - destroyed the castle. This was followed for almost 150 years by little but neglect, which did even more damage and left only the shell of outer walls remaining.

Fortunately, plans to demolish the ruins were defeated in favour of a plan to reconstruct the castle in its previous form. The rebuilt castle was open to the public, in its current shape, in 1968.

Príbeh hradu/The Story of the Castle in Bratislava doesn't offer detailed information about the castle's past or its architectural styles. Instead, it offers a snapshot of the history of this peculiar building, which continues to intrigue with its unusual shape. Consequently, there is still space in the market for books about the castle which take a different approach. In particular, the present planned extensive reconstruction, which should restore some of the castle's features from its later period as a royal residence, will offer such books an opportunity.

Some might be surprised by the relative absence of interior photos in the book, but its authors may have decided to leave them out since much of the interior has little in common with the castle's history. There was hardly any information about how the inside of the castle looked before the devastating 1811 fire, which meant that those rebuilding in the 1950s were unable to restore it. As a result its rooms owe more to the styles of the communist era than the castle's royal history.

Each chapter of the castle's history, from its origins to the efforts of architect Alfred Piffl (thanks to whom we can still admire the castle), could be extended into a weighty tome. This book instead provides a short and interesting portrait which could either tempt potential guests or recall some of the memories of a place steeped in history.