Slovak musicians to perform in Austria

THE SLOVAK Philharmonic orchestra and choir will present Giuseppe Verdi's La Traviata as the main show of the 11th St. Margarethen Opera Festival in Burgenland from July 9 to August 24, the SITA newswire wrote. 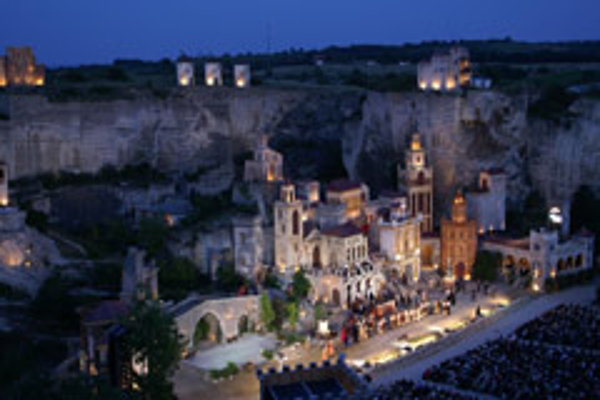 THE SLOVAK Philharmonic orchestra and choir will present Giuseppe Verdi's La Traviata as the main show of the 11th St. Margarethen Opera Festival in Burgenland from July 9 to August 24, the SITA newswire wrote.

The performance will take place at the Roman Quarry, a site on the UNESCO World Heritage List.

Interest is high because the production was staged by respected director Robert Herzl.

"La Traviata has always been staged with alterations," conductor Ernst Märzendorfer said at a press conference on March 11. "We will stage it in the original version, without any cuts, as it was premiered in the Teatro la Fenice in 1853."

La Traviata, which is based on La dame aux Camélias by Alexandre Dumas, will premiere on July 9.

Also sparking interest is that this festival marks the first time in the 60-year history of the Slovak Philharmonic that its ensembles are performing together in a long-term project.

"Keep in mind that this festival is used to having 35 sold-out evenings, each of which is attended by 4,500 spectators and that people from across Europe will be there to evaluate us," Mariana Kušková, manager of the Slovak Philharmonic Choir, told SITA. "It is an excellent opportunity for promotion, but it is also a major commitment."

Performing at the festival will be a new experience for the orchestra, which usually does not play operas.

Two soloists from the Slovak National Theatre will accompany the philharmonic's 50-member choir and the 60-member orchestra to the festival. Tomáš Juhás, a tenor, will sing the role of Alfredo and Gustáv Beláček, a bass, will sing Barone.

Other soloists include Kristiane Naiser, Jean-Francois Borras and Georg Tichy.

Last year, 200,000 people visited the festival, which takes place only 65 kilometres from Bratislava.