After 200 years, the Catholic Church gets a makeover

THE ROMAN Catholic Church in Slovakia has just undergone a massive reorganisation. The changes are particularly significant since nearly two-thirds of citizens identify themselves as Roman Catholic. Church officials say the reorganisation responds to challenges such as the increased number of Catholics and the need for closer contact between church leaders and followers. 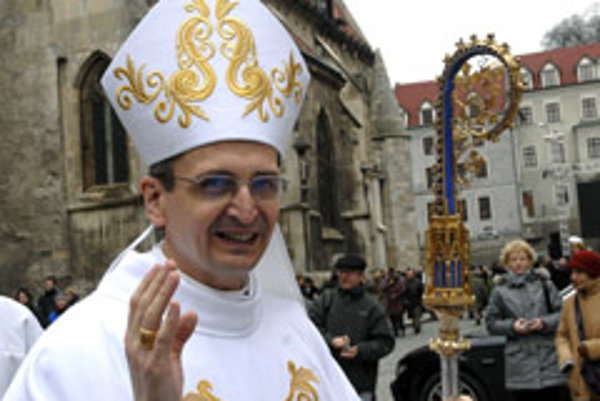 THE ROMAN Catholic Church in Slovakia has just undergone a massive reorganisation. The changes are particularly significant since nearly two-thirds of citizens identify themselves as Roman Catholic. Church officials say the reorganisation responds to challenges such as the increased number of Catholics and the need for closer contact between church leaders and followers.

Slovakia gets two new dioceses, increasing the total number to eight, while diocesan borders and administrative units within the church have also been changed.

The previous Bratislava-Trnava archdiocese has been split into two units, with the Bratislava archdiocese becoming the national headquarters and Trnava, though for now remaining an archdiocese, subordinated to the capital. The church has also created a new diocese with its seat in Žilina.

Church officials said they were happy with the new arrangement, which took almost five years to prepare.

“Since the last reorganisation of the church 200 years ago, the number of Catholics has increased and the church needed to adjust to these changes,” Jozef Kováčik, spokesman for the Conference of Slovak Bishops told The Slovak Spectator. “We want bishops to be able to communicate with believers without larger obstacles.”

The church has been working on the changes since 2003, searching for the best model.

“The reorganisation is for neither one year nor ten, so the preparations had to be in-depth and responsible,” said Kováčik.

Alojz Tkáč, Archbishop of the Košice Archdiocese, confirmed to The Slovak Spectator that the preparations had been long, and different options had been considered.

“Since the territories of dioceses had not changed for centuries and people internally identified with this division, more time was needed to accept the proposed models,” Tkáč said.

According to Archbishop Tkáč, the church wanted to make sure that certain regions and parts of dioceses were closer to the seat of their bishop or archbishop.

“The most difficult thing was to develop the new centres in such a way that their distribution in Slovakia is balanced,” Kováčik told The Slovak Spectator.

The thorough-going changes were approved earlier this year by Pope Benedict XVI who appointed Stanislav Zvolenský to be the new Archbishop of Bratislava. He previously served as bishop of the former Bratislava-Trnava archdiocese.

Sokol gets a new superior

One of the most prominent Roman Catholic leaders in Slovakia, Ján Sokol of Trnava, retains his archbishop’s mitre but will defer to Archbishop Zvolenský. The Trnava diocese is one of a handful that also serves as the seat of an archbishop, though it remains subordinate to Bratislava.

“This is a rare phenomenon,” said Kováčik.

Sokol is a controversial figure since he is listed as having cooperated with the Communist secret police, or ŠtB, according to files held by the Nation’s Memory Institute (ÚPN). Sokol has denied cooperating with the ŠtB.

On December 27 2006, Sokol praised Jozef Tiso, president of the wartime Slovak state, in an interview with the private news TV channel TA3.

“I respect President Tiso, I respect him very much, as I remember when I was a child, we were very poor, but during his time we had a high standard. I even have evidence... There was prosperity here,” Sokol said in the interview.

Tiso was executed after the war for collaborating with the Nazis and his role in the deportation of more than 70,000 Slovak Jews, most of them to German death camps.

ŠtB archives at the ÚPN also list Zvolenský’s name as a so-called “trusted person,” according to the ČTK newswire.

However, a person cannot be accused of having cooperated with the secret police based on this categorisation, according to the ÚPN.

“I personally feel this is a huge insult that the previous regime has caused me,” Zvolenský told news television TA3 on February 2.

“We will uncompromisingly reject any [suggestion that there was] cooperation between the new archbishop and the secret police,” said Kováčik.

According to Kováčik, Archbishop Sokol has been granted by the Vatican the privilege of being allowed to wear an archbishop’s pallium (a white band worn around the shoulders) for the rest of his life, which is considered a great honour in the church.

Paying for the new order

The reorganisation opened up the sensitive question of state funding for churches and the new dioceses, in particular given Slovakia’s need for strict fiscal discipline in preparation for forthcoming adoption of the euro.

However, the church avoided funding-related problems by saying it would not, at least for now, ask for additional money from state coffers.

“Though last year’s budget did not take into account the new dioceses, we have settled for a step which will not cost the state a single crown and thus we would not ask for further increase,” Kováčik said. “All the dioceses will contribute to the functioning of the new dioceses on a solidarity basis.”

In future years funds from the state budget will be distributed based on the number of dioceses Kováčik said, adding that this also depends on the financing model the church chooses.

He confirmed that the church has been seeking new financing to increase priests’ salaries.

The state co-funds the operation of church institutions, which in effect means the salaries of priests. But over the past couple of years the church, despite rising salaries, has felt it had insufficient funds, said Kováčik.

The church’s new arrangement recognises Bratislava’s specific position said church officials, and added that the capital now requires some extra effort in terms of spreading the faith there.

“It is very necessary that Bratislava, Slovakia’s capital, becomes the headquarters of an archbishop,” Archbishop Tkáč told The Slovak Spectator.

Bratislava’s Archbishop Zvolenský said that the Catholic Church still has much work to do when it comes to addressing the capital’s citizens.

“Bratislava is specific because it is the centre for political bodies, cultural organisations and the media,” Kováčik said. “This is where things happen and the approach to church issues must be different compared to other cities, where public attitudes don’t move so dramatically.”

Greek Catholics, of whom there are about 25,000 in Slovakia, also now have a new headquarters in Bratislava - the Bratislava eparchy (broadly speaking, the Greek Catholic equivalent of a diocese) - as a result of a parallel reorganisation.

“For almost 200 years, the Greek Catholic Prešov Eparchy functioned in a very unnatural legal environment, because it directly fell under Rome without having any intermediary body,” said Ľubomír Petrík, spokesman and director of the Greek Catholic Archbishop’s Office in Prešov.

Though an apostolic exarchy was created in Košice in 1997 it didn’t solve organisational problems within the church.

“We have been requesting a new eparchy in Bratislava because in central Slovakia there are many Greek Catholics and it is impossible to administer them from such a distance [Košice or Prešov],” Petrík told The Slovak Spectator.

On January 30, 2008 the Bratislava eparchy was set up, while at the same time the Prešov eparchy was elevated to the status of autonomous metropolia (sui iuris), a very rare administrative arrangement within the Greek Catholic church, said Petrík.

Petrík said that liberal lifestyles are more prevalent in the western part of the country and new priests have not been ordained there for several years.

However, the church in Slovakia in general has had no serious problem with a lack of priests and seminaries are full.

“On the contrary, our young priests are leaving to help out abroad within missions in Serbia, Ukraine and the United States,” said Petrík. “The average age is 34-35, which is also a great success.”

Ethnic Hungarians are yet to see their dream for a “Hungarian” diocese come true. The Hungarian Coalition Party (SMK) has been calling for a Hungarian diocese for many years.

After the new arrangement was published, the SMK said that it was unacceptable to the party.

Kováčik said that the Catholic Church has been open to a dialogue, but added that no politician should intervene in the appointment of bishops, according to the terms of the Fundamental Treaty between Slovakia and the Vatican.

Bratislava Archbishop Zvolenský said that bishops serving in dioceses where there are Hungarians will try hard to confirm that they can be good bishops for Hungarians as well.

With files from Dominika Uhríková