INSTEAD OF taking the R Váh from Bratislava to Košice, train passengers have been travelling on the Quelle as of April 2. 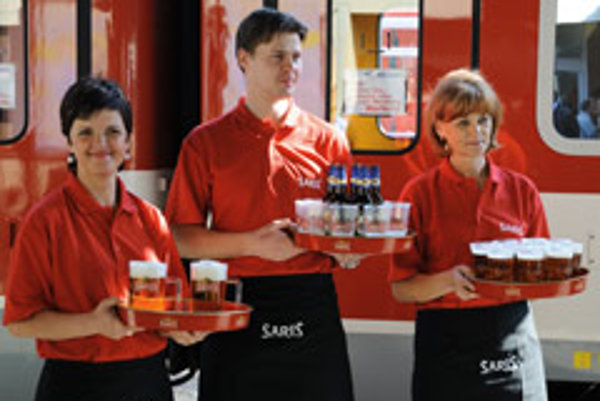 Just don’t give the driver any more: one of Slovakia’s trains is now named after a well-known beer. (Source: SITA)
Font size:A-|A+  Comments disabled

INSTEAD OF taking the R Váh from Bratislava to Košice, train passengers have been travelling on the Quelle as of April 2.

The train, which for years has carried the name of Slovakia’s longest river, is one of four that were recently renamed under a new advertising agreement recently concluded between the Slovak Railway Company (ŽSSK) and private companies.

Quelle is an international mail-order catalogue company based in Germany.

Another of the trains, the Považan, which was named after a region near the Váh, is now called the Avízo, which is a Slovak advertising magazine.

The other two trains are the IC Váh, which was also named after the country’s longest river, and the IC Gerlach, which is the country’s highest peak. The first was renamed the Slovenka, after a Slovak women’s magazine, and the second is the Šariš, which is a brand of Slovak beer as well as a region in eastern Slovakia.

ŽSSK expects this new form of advertising will bring in higher revenue and enable customers to enjoy better services.

“For ŽSSK it means more income; for customers it is a signal that its services are improving due to interest in its products, even in the area of advertising,” Miloš Čikovský, spokesman for ŽSSK, told The Slovak Spectator.

As well as paying to rename the trains, the companies had to agree to maintain the trains’ technical conditions when putting advertising up or taking it off, Čikovský said. The conditions varied from contract to contract, he said.

ŽSSK got the idea for this advertising from similar products in Austria and Germany.

A company can buy a name of a train for at least one year, which is the length of time the train’s timetable is valid.

“So far, we have only sold the names of four trains,” Čikovský said. “We expect that in the next timetable period, that number will at least double.”

He added that not all the names of the 1,500 trains the company dispatches daily are for sale.

“We are not interested in putting up advertisements on all the trains,” he said. “At the same time, not every name or brand is suitable to use as the name of a train.”

He disagreed that the new names could confuse people who travel with less frequent passengers.

“Each train still has a number and the number is most important,” he told The Slovak Spectator.

“People will get used to the changes,” he added. “For example, the Slovenka has carried that name for only three months, but is already famous among passengers.”