Music for dancing to, not listening

SUNDAY, March 30, was a sunny evening, and the seats at the Klub Za Zrkadlom music club in Bratislava were slowly filling. 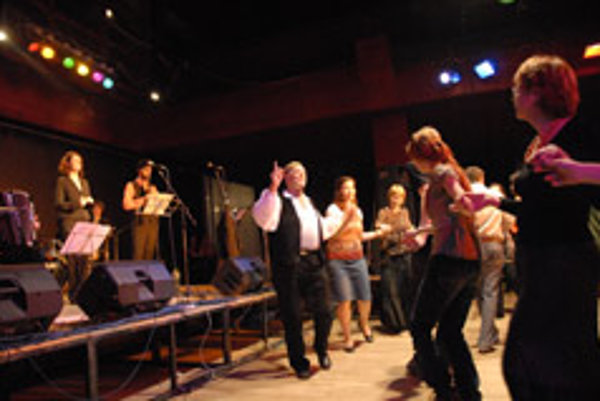 SUNDAY, March 30, was a sunny evening, and the seats at the Klub Za Zrkadlom music club in Bratislava were slowly filling.

But then news arrived that the car carrying one of the two bands that were to perform the evening’s Tants Klezmer! concert and dance workshop had broken down, leaving the band stranded a few kilometres outside the city. Everyone’s hopes for a pleasant evening of music and dancing quickly started to fade.

Suddenly, a man dressed in black trousers, a white shirt, a black vest and a cap with golden embroidery stepped onto the dance floor and called out: “Do you want to learn how to dance klezmer?”

“So, come here,” said the man, Leon Blank, a prominent Polish-born Swedish dancer and choreographer who has been teaching klezmer dances around the world.

And so the dancing began.

Blank started by demonstrating the dance steps without music and then asking people to imitate. Once everyone had learned the basics, he told someone to turn on a CD player and started leading the crowd through a series of energetic figures and formations.

Before long, the whole space was filled with Blank’s energy and zest for dance, which he communicated in a mixture of English and Polish.

When Létající Rabín, a klezmer band from the Czech Republic, finally arrived at the club, they found an audience already familiar with several styles of klezmer dances, such as frejlachs or bulgar. Everyone was ready to start moving their bodies to live music.

Blank was in charge the whole evening. Even when he didn’t know the song the band was playing, he moved his legs in tempo until he felt out suitable movements, and then went on to the dance floor to show the moves to others. If a song ended before he wanted it to, he asked the band to play it again.

The Pressburger Klezmer Band, which calls the Klub za Zrkadlom home, took over from Létající Rabín, and played rhythms that were accompanied by choreography that grew increasingly complex.

It all ended in a burst of energy that left smiles on the faces of everyone in the room that night.

Blank arrived in Bratislava at the invitation of the Pressburger Klezmer Band, which is considered the best of its kind from the former Czechoslovakia. The band regularly hosts foreign and local bands when it plays double bills in the Klub za Zrkadlom.

“We’ve been planning something like this,” Samuel Alexander, who plays double bass and sings in the band, told The Slovak Spectator. “We tried in the past to go among the audience and make the people dance, but we are not as good dancers or able to show them the steps like maestro Blank, who is an expert. So we tried to get a real klezmer dancer here.”

“For example, in Vienna, he got the audience at our concert on their feet,” Alexander said. “The same happened at the festival in Lubin, Poland. He started people dancing on a large part of the huge square where the festival took place. We have already spoken with him about the possibility of having a dance workshop in Bratislava.”

Tants klezmer! (Dance Klezmer!) was the first dance workshop Blank has given in Slovakia.

“Wonderful people, fantastic,” Blank told The Slovak Spectator after the event. “We have done so many dances today. It looked very easy, but it was not.”

Blank then recounted some of the history of klezmer.

“Klezmer comes from Eastern Europe, such as Poland, Slovakia, the Czech lands, Romania, Ukraine and Russia,” Blank said. “It was music for happiness, for weddings, some special occasions, celebrations, bar mitzvahs and so on. From the very beginning it was music not for listening to, but for dancing.”

Klezmer musicians typically travelled from one place to another to play for weddings, he said. They were fantastic musicians, but without any training, he added.

“A father gave his sons lessons and it was a family tradition to play klezmer music. They played for fun, for pleasure and the most common dance was frejlachs. Only later on did klezmer come to the stage.”

“Frejlachs means in joy, or happiness, in Yiddish,” Blank said.

After World War II, klezmer disappeared from Eastern Europe, but, fortunately, some of the musicians came to the United States around 1910, 1920, 1930, until the 40-50s, Blank continued.

“And then it disappeared again. In America as well, because the klezmer musicians started to play American music.”

Klezmer experienced a revival in the 1970s when some young Jewish American musicians were asked why they weren’t playing their own music, Blank said. The musicians looked for old recordings and music scores and created something of renaissance for klezmer in America, he said.

“And then it was exported back to Europe,” he said.

Like klezmer music, klezmer dances have adapted and adopted some tunes and steps from local music, as well as folklore.

But Blank has not been interested in klezmer his whole life. He grew up in a Jewish family in Poland and moved to Sweden in the mid 1960s. As a dancer, he had primarily been interested in folklore, but fell in love with klezmer after hearing it performed by the American group Klezmorim at a festival in Sweden about 20 years ago.

“I was listening to the music and I felt that it came into my heart immediately,” he told The Slovak Spectator. “I recognised many tunes from my childhood and from my knowledge of Balkan and Israeli dance forms. Really, I was so touched. So I started to look for recordings, old movies and filmed weddings. I took some steps from there, I also read the literature and I looked for pictures of that time.”

Contrary to music, dances are not written down on paper.

“I cannot say that 100 percent of my dancing is how it was, but this is my way of interpretation,” said Blank.

Blank has given klezmer dance workshops around the world and has performed at festivals and weddings.

“I was recently in Vienna, where I danced at a Jewish wedding,” he said. “They invited me from Stockholm.”

The Tants Klezmer! is not likely to be the only cooperation between Blank and the Pressburger Klezmer Band.

“In June I will give a workshop in Vienna and after Vienna I will be here with this band again,” Blank said.