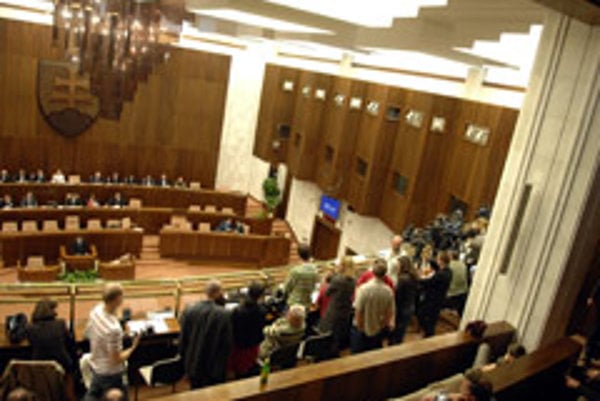 Journalists in the press gallery of the Slovak Parliament on April 9 looked on as MPs voted to approve the new Press Code, which the government and the opposition say will affect media freedom. (Source: ČTK)
Font size:A-|A+0

The opposition parties have been critical of the bill all along and had even made their support for ratification of the Lisbon Treaty conditional on the governing coalition omitting the most controversial parts of the press bill.

However, during the second reading in parliament, only those amendments proposed by coalition MPs were approved. Observers and opposition MPs regard these as making little more than cosmetic changes to the new law. No opposition amendments were accepted.

"The Press Code is modern," Prime Minister Robert Fico told the daily Sme on April 10. "First of all, it secures equality of arms (sic), which was missing in the old press act. Everybody will certainly be satisfied with how this act is going to work."

However, Mikuláš Dzurinda, former PM and chairman of the largest opposition party, the Social Democratic and Christian Union (SDKÚ) said that the law clearly restricts press freedom and curtails democracy in Slovakia.

The Association of Periodical Press Publishers and the Slovak Syndicate of Journalists said that they would ask Slovak President Ivan Gašparovič to veto the law.

As The Slovak Spectator went to print, the association was planning to hold a protest on April 11 and said it intends to ask its members to print a further protest call on their cover pages.

Major Slovak dailies belonging to the association had already listed their objections to the press code in a document entitled "Seven Sins of the Press Code," which ran on the otherwise blank front pages of their publications on March 27. Publishers objected, among other things, to the Press Code granting a right of reply even in cases where the information printed is correct, and the right to a correction even if the published information has not maligned anyone. They also argued that the draft allows for double sanctions, namely being obliged to print both a correction and a reply.

The publishers warned that they could be made responsible even for replies which are at odds with the law and public morality (for instance, by expressing extremist views) while state and public institutions would also enjoy a right of reply which, according to international organisations, creates room for abuse.

The ruling coalition claims that it has made compromises. So what has been changed?

The authority to punish publishers for articles promoting or downplaying war, violence, or drugs will remain with the courts and will not be transferred to the Culture Ministry as the bill originally planned.

Regarding the next most-debated provision, the right to reply, MPs made only slight changes. The main objection of the publishers - that readers will have the right to have a reply published even when the information contained in a newspaper article was entirely factually correct - remains in the code.

Newspapers will be obliged to print a reply in the same place, and on the same scale, as the original story to which the respondent objected. Readers will be able to respond in their reply to references which they believe offend their honour. If a newspaper refuses to print a reply, a court can fine the publisher up to Sk150,000.

Also, the duty to protect the source of information has changed to a certain degree. The new act assumes an exception to this duty; it will allow journalists to reveal their sources in cases where a crime would be prevented.

The bill requires the approval of the Slovak president. If he signs it, the new law will come into force on June 1. If he refuses, MPs will have to discuss it again, but political analysts think a refusal by the president is highly unlikely.

Miloš Nemeček, the chairman of the Association of Periodical Press Publishers told The Slovak Spectator that the law threatens press freedom in Slovakia.

"The law will be exactly as bad as we said it would," Nemeček told The Slovak Spectator.

One of the worst things that has remained in the law is the badly-worded right to a reply, he said.

"The law does not mention at all that this should be a correction, or reply to false or misleading information," Nemeček said.

On the contrary, the commentary accompanying the new law states explicitly that the right to a reply arises even when the information published is entirely correct. The only condition which needs to be met in order for a reply to qualify for publication is that a person feels insulted by the published information.

According to Nemeček, newspapers will be flooded with reactions from readers, which will all have to be published.

"This creates an almost uncontrollable possibility for replies," Nemeček stressed. "If the condition is a subjective impression that is hard to define in an objective way, then it is really very hard to defend against it."

Political analyst László Őllős said that as a consequence of the new act, the media will struggle with huge problems while the freedom of the press will be threatened. He said that a wide discussion should emerge about basic human freedoms and democracy.

"Questions of basic human rights, i.e. the freedom of the press, will resonate in Slovakia," Őllős told The Slovak Spectator.

Thanks to the new law, newspapers will be flooded with the most diverse replies, which will be very hard to read, even to the extent of being unintelligible. The resulting decrease in readership could cause financial troubles for periodicals, and even their demise, said Őllős.

However, he is confident that a discussion about basic democratic values can still change the law.

The OSCE has criticised the bill from its very inception. OSCE press freedom representative Miklós Haraszti said it was disappointing that OSCE recommendations regarding the right of reply were not implemented.

"As it stands now, the law would still fail to comply with Slovakia's OSCE commitments to protect media freedom," Haraszti said in an official OSCE statement in March.