THE GOVERNMENT'S press department wrapped up the recent visit by Russia's Prime Minister, Viktor Zubkov, in a rather unconventional way: by issuing an official statement sharply attacking the media. 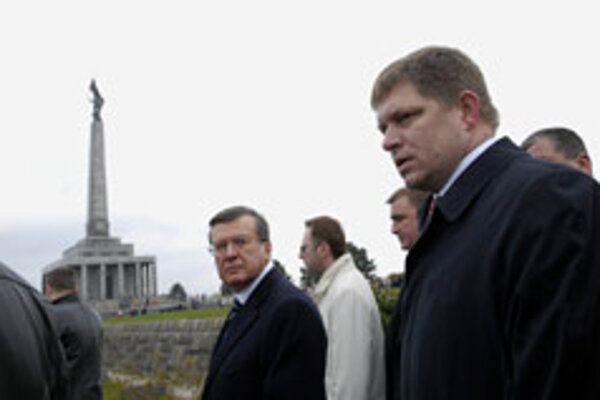 THE GOVERNMENT'S press department wrapped up the recent visit by Russia's Prime Minister, Viktor Zubkov, in a rather unconventional way: by issuing an official statement sharply attacking the media.

Slovak Prime Minister Robert Fico said that the Slovak media had failed to fulfil its duty and sufficiently inform the public about the visit of Zubkov between April 3 and 4. Fico said that he had discussed crucial issues with his Russian counterpart, which the public did not have the opportunity to learn about owing to what he described as the media's failings.

But neither media experts nor political analysts were able to identify any major deficiency in the way the media reported the Russian prime minister's visit, which took place during the NATO summit in Bucharest.

According to a statement on Zubkov's visit issued by Silvia Glendová, the prime minister's spokeswoman, the Slovak media displayed "unbelievable unprofessionalism on the part of their editorial teams" and condemned "their incapability or unwillingness to tell the essential from the non-essential, stemming from their political biases" which it said were "impossible to hide".

"When it comes to professionalism, the Slovak media have chronic failings," the statement concludes.

According to the government, there was much to report during Zubkov's visit: talks on Slovakia's energy security, deliveries of natural gas and crude oil, the project to extend a broad-gauge rail line across Slovakia, not to mention the completion of the third and fourth reactors at the Mochovce nuclear power plant.

According to the prime minister, he and Zubkov also discussed exports of spent nuclear fuel from Slovakia and a Russian proposal to involve Slovak companies in the construction a uranium enrichment facility.

"Thus, let us apologise to the Russian side for the attitude of most of the Slovak dailies," the official governmental statement reads.

On April 6, Fico went on to launch a tirade against the media during a talk show on TV news channel TA3.

He said that the public has the constitutional right to be informed, but the media are preventing it from being informed.

"It is not possible to tolerate the fact that nobody writes anything about basic events in this state," Fico said, bringing up Zubkov's visit as an example.

Fico said he felt ashamed when some member of the Russian delegation asked him why the dailies did not even mention the visit of the Russian prime minister.

"I answered that I felt very sorry, that I had to apologise," Fico added.

Fico went on to say that he discussed crucial issues with Zubkov such as long-term contracts for gas supplies, and that they agreed to start construction of a broad-gauge railway from Russia through Slovakia to Vienna in 2010.

According to Fico, these are the issues that dominate media coverage everywhere in the world and are even more important than the Press Code, which is currently so vehemently discussed in Slovakia, or the OSCE's reservations about it.

"Today, when you go the European Council, nobody will talk about the OSCE with you, or the Press Code," Fico said. "Everyone asks about infrastructure. Everyone asks how to secure energy supplies. These are global issues."

Citizens want, in the first place, to know whether they will have a secure supply of gas, and what the gas they consume will cost, Fico argued.

"Our contract ends in 2008, and we need to sign a contract for 20 more years," Fico told TA3. "We need to argue about prices. These are the fundamental issues which move Slovakia."

Fico made some further comments addressed at Miklós Haraszti, who has been the OSCE representative on freedom of the media since 2004.

"Someone who lives somewhere in a family house, and pays thousands and thousands for gas heating, does not give a damn about what some third-class OSCE official, Mr. Haraszti, says," Fico said.

The TA3 host noted that the media's role in reporting the Russian prime minister's visit was somewhat complicated by the fact that at the joint press conference held by Zubkov and Fico journalists were prohibited from asking questions.

"This was requested by the Russian side," Fico responded.

The Russian daily Vremja Novostej wrote on April 4 that "the Russian PM Viktor Zubkov at his negotiations with the government of Slovakia in Bratislava played the role of a lobbyist for Russian energy interests".

It was not mentioned in the article that the Russian side intended to complain about any lack of interest by Slovak journalists.

"Slovakia is a crucial strategic partner for getting Russian energy sources to Europe," Zubkov was quoted as saying by the daily.

The Russian daily also quoted Zubkov's statement to the Slovak media: "We confirmed political agreements about gas and oil deliveries to your country."

"Gas contracts will expire this year, and [we are] negotiating about their prolongation - with success," Zubkov went on to say.

Alexander Duleba, head of the non-governmental think-tank The Slovak Foreign Policy Association told The Slovak Spectator that the visit by the Russian prime minister did receive sufficient coverage in the Slovak media.

Duleba said he understood the importance and significance of energy security for Slovakia.

"But no less important is the subject of international security and the functioning of NATO, of which Slovakia is a member," Duleba told The Slovak Spectator.

He added that the media did not fail by reporting more information about the NATO summit, which took place at the same time as Zubkov's visit to Slovakia.

"I would not overestimate the importance of this visit, due to the fact that Zubkov will soon end his term in office," Duleba said. "So our Prime Minister will have to build a relationship with the new Russian prime minister, who will most probably be Putin."

According to Duleba, the problem of gas supplies is primarily the concern of negotiations between the Slovak gas utility Slovenský Plynárenský Priemysel (SPP) and the Russian gas monopoly Gazprom.

"Premiers can put out statements concerning this issue, but in the end the contract between Gazprom and SPP will decide it," Duleba added.

The Mediálne.sk website has been collecting and publishing critical statements made by the Government Office towards the media during Fico's term as prime minister. So far, it has recorded more than 40 of them.

Zubkov's visit was the first to Slovakia by a Russian premier for more than ten years, the last being by Viktor Chernomyrdin in 1997. But President Vladimir Putin has visited Slovakia in the meantime. In 2005, a summit between Presidents Putin and Bush took place in Bratislava.