From zero to hero

THE FIRST mortgage loan in Slovakia was granted little more than a decade ago. Since then, not only has the word "hypotéka" - Slovak for mortgage - been deeply engraved into the national vocabulary, but trust in the product has deepened. 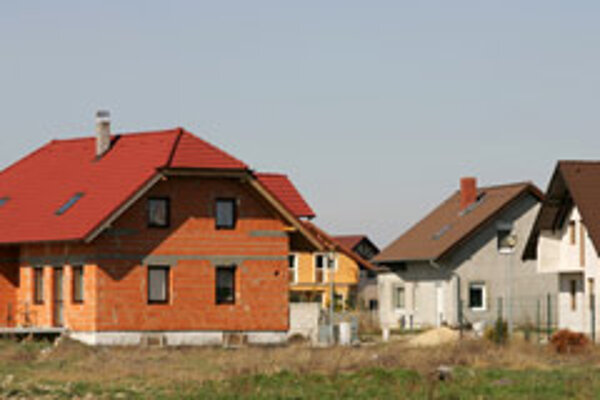 THE FIRST mortgage loan in Slovakia was granted little more than a decade ago. Since then, not only has the word "hypotéka" - Slovak for mortgage - been deeply engraved into the national vocabulary, but trust in the product has deepened.

Consumer interest in mortgages has grown continuously, unleashing a wave of creativity on the part of banking houses when it comes to designing their mortgage products. During the forthcoming 12 months one fifth of Slovakia's population plans to provide for its housing requirements through mortgages, according to a GfK survey conducted for the financial daily Hospodárske Noviny.

Market watchers attribute the mortgage boom to the muscular economy, and expect the interest in mortgages to be maintained while banks continue to tailor their products to developments in the real estate market.

The Slovak property market is still characterised by a deficit of apartments leading to an excess of demand over supply, Robert Prega, an analyst with Tatra Banka, told The Slovak Spectator.

"Supply is gradually catching up [with demand] and the favourable development of the country's economy will mean additional strong growth in housing loans, which will be even stronger than in 2007," Prega said.

The growth of real wages along with falling unemployment and stable interest rates in preparation for Slovakia's expected entry to the eurozone will further fuel the interest in mortgages, Prega added.

"Given the high economic growth, which is likely to continue in future years, people are more willing to go into debt," Juraj Barta, chief economist for Slovenská Sporiteľňa, told The Slovak Spectator.

Slovaks are getting used to the idea of buying real estate as a form of investment, and investing via a mortgage, said Miroslava Mitková, of Slovakia's first mortgage broker Hypocentrum.

"I also think that references play a significant role: many Slovaks know many other individuals who are buying with a mortgage which they are able to repay," Mitková said. "Thanks to banks' well-adjusted risk policies, there are still few cases where banks repossess property or people are forced out of their homes."

According to Mitková, people are adjusting more to the idea of being in debt, though clients still hope to repay their loans in the shortest possible time.

"Most clients find comfort in the option of earlier repayment embedded in the loan contracts, while they can also sell properties pledged in favour of mortgage lenders," Mitková said.

Barta said that along with the growth of disposable household incomes, people's ability to pay off their loans has been increasing as well.

However, mortgage professionals agree that the mortgage product has evolved quite dramatically since 1997.

Back then, a mortgage was more of a product for bank experts than real people, according to Mitková.

"It was a complicated and lengthy process just to collect the documents required for a mortgage application and to get approval," Mitková told The Slovak Spectator. "Not to mention the mortgage release: most likely it wasn't possible to pay with a mortgage before title transfer. This of course contributed to sellers being mortgage-averse, and deeming it a very risky route."

Clients were eligible for a mortgage of only 50-70 percent of the property's value. At that time, valuations were governed by different regulations than today and the valuation was likely to be lower than its purchase price, Mitková said.

Therefore, getting a 70 percent mortgage in fact meant obtaining 50 percent of the purchase price, according to Mitková. Along with the property, banks required a notary deed as additional security while requirement for life insurance or a guarantor was also quite common, she said.

According to Mitková, one of the factors that made mortgages attractive at the time was the state subsidy, which originally stood at 3 to 6 percent. The interest rate was also high - up to 12 percent per annum - and the state subsidy was fixed for the entire repayment period.

"The fees associated with mortgage were higher, and banks commonly required a fee for mortgage application as well as a fee for loan arrangement," Mitková said.

The state subsidy has since been reduced to 1 percent and is no longer guaranteed for the entire repayment period. Interest rates for mortgages also fell and banks introduced one-year fixed rates, which became popular, said Mitková.

One of the most significant changes came when banks started providing mortgages to cover the full property value.

But the most important change for clients is the simplified process of arranging a loan, according to Štefan Frimmer, spoksesman for Slovenská Sporiteľňa.

Also new products, like consumer loans for housing - which allow customers to draw loans without even documenting the use of funds - have contributed to swelling public interest in mortgages, said Frimmer.

"Another advantage is that after an agreement with the social insurer Socialná Poisťovňa, clients do not have to document their income," Frimmer told The Slovak Spectator.

According to Michal Kopecký of VÚB bank's press department, a system of advantageous mortgage loans for young people, the simplified application process and also the increase in real estate prices have all helped increase interest in mortgages.

"One of the drivers of the growth in the mortgage market has been the interest in advantageous loans for the young," Kopecký said, adding that the bank has recorded the highest level of interest in the Bratislava, Prešov and Nitra Regions.

According to Mitková, these changes were linked to changes in the real estate market. Faster land registry proceedings (15 days instead of 30 days), a different methodology for property valuations (the property value is its market value) and the possibility of pledging as collateral an apartment still under construction all added to the market's positive development, said Mitková.

On a cumulative basis, the total sum of approved mortgages was Sk116.23 billion (€3.58 billion) at the end of last December, representing 111,788 contracts, SITA reported.