The Lisbon Treaty, in hindsight

WHILE Brussels has welcomed Slovakia's ratification of the Lisbon Treaty, which sailed through parliament on April 10, the treaty's path to passage caused a serious rift between the opposition parties that political analysts are describing as a crisis. 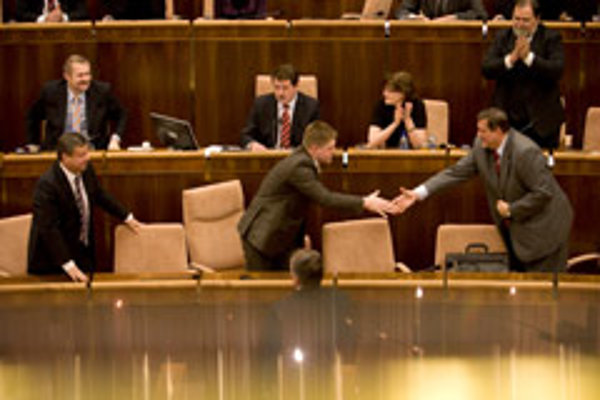 WHILE Brussels has welcomed Slovakia's ratification of the Lisbon Treaty, which sailed through parliament on April 10, the treaty's path to passage caused a serious rift between the opposition parties that political analysts are describing as a crisis.

The treaty passed with the backing of the Hungarian Coalition Party (SMK), which, along with the other opposition parties, had previously refused to support it until concerns about the coalition's controversial Press Code were addressed.

So when parliament passed the Press Code on April 9 without the opposition's amendments, the opposition hoped to unify in order to delay ratification of the treaty.

The governing coalition - Smer, the Movement for a Democratic Slovakia (HZDS) and the Slovak National Party (SNS) - needed the backing of at least five opposition MPs because a treaty requires the support of a three-fifths majority of parliament, or 90 votes. The coalition only has 85 votes.

With the SMK's help, the treaty received 103 votes in favour, five against, and one abstention. The MPs who voted against it were mostly former members of the opposition Christian Democratic Movement (KDH). MPs from the KDH and parliament's strongest opposition party, the Slovak Democratic and Christian Union (SDKÚ), refused to take part.

"I appreciate the support for the Lisbon Treaty from all parties of the political spectrum, and also the fact that the parliament was able to ratify the treaty at the right time," José Barroso, head of the European Commission, told the ČTK newswire on April 10. "I am happy that the remaining member states will follow the example given by Slovakia and other countries, which have already ratified the treaty."

After the vote on the Lisbon Treaty, KDH chairman Pavol Hrušovský said that the SMK had thwarted the opposition's efforts to use its ratification as a bargaining chip in the push for changes to the Press Code.

"With this decision, the SMK has become a silent companion of this ruling coalition," Hrušovský told journalists. "It betrayed the opposition's joint effort."

Mikuláš Dzurinda, former prime minister and chairman of the SDKÚ, told the TA3 news station that the SMK leadership had put its economic and other interests ahead of democracy in Slovakia.

"It's very regretful that the SMK traded Slovak democracy for a Hungarian copper, to put it poetically," Dzurinda told the TA3 news channel on April 13.

The opposition parties had conditioned their support for the Lisbon Treaty on revisions to the Press Code, which the opposition, as well as media and international organisations, maintained would infringe on editorial autonomy and freedom of the press.

"I believed that the treaty would be supported by all colleagues, but I understand also the anxiety caused by the Press Code, which contravenes European legislation," Joseph Daul, the head of the deputy club of the European People's Party and European Democrats in the European Parliament, told TA3 on April 11.

And Hannes Swoboda, the vice-president of the socialist faction of the European Parliament, to which the Smer party is an observer, told TA3 that he would wait to see how the code is applied before deciding whether to press for an amendment.

Dzurinda said that if the SMK had continued to join forces with the opposition, Fico would have eventually been forced to yield to the criticisms of the Press Code.

Instead, it struck a deal with Smer before the vote, Dzurinda declared.

That accusation was met with a swift response from SMK chairman Pál Csáky, who issues a challenge to Dzurinda on TA3: "If you have evidence, put it on the table."

Fico has denied making any agreements with the SMK in exchange for their support.

"I was surprised by the SMK's stance, but I am pleased that they voted for it," Fico told journalists.

Grigorij Mesežnikov, president of the non-governmental think tank Institute for Public Affairs (IVO), said that the SMK's vote in favour of the Lisbon Treaty has sent shockwaves through the political scene.

"Relations among the opposition parties are damaged," Mesežnikov told The Slovak Spectator.

According to Mesežnikov, it was positive that parliament ratified the Lisbon Treaty because it is the best available method for settling relations between EU member states.

"But I do not consider the conditions under which it was ratified normal," Mesežnikov said, adding that the Press Code in its current form disqualifies Slovakia from the group of democratic countries.

Mesežnikov said that the opposition still has options that could lead the code being amended, and that international organisations will likely continue to push for it to be revised.

He also said that he never doubted that the Lisbon Treaty would eventually be ratified and that there should have been a more intense debate among the opposition parties, which would have given the SMK more room to explain its intentions.

Mesežnikov added that the Press Code pertained to basic human rights, specifically the freedom of the press, which is why the opposition's approach to was "understood and quite justified."

On April 15, the editors-in-chief of the largest Czech dailies - Mladá Fronta Dnes, Lidové noviny, Právo and Hospodářské Noviny - and the Týden magazine sent an open letter to Slovak President Ivan Gašparovič, calling on him not to sign the Press Code.

"We do not wish to interfere in your country's affairs, but we believe this new version of the Press Code presents a grave threat to freedom of speech," they wrote in an open letter published on Medialne.sk.

Vladimír Bilčík of the Slovak Foreign Policy Association told The Slovak Spectator that it was not exceptional for the fate of supranational documents to become intertwined with domestic issues, as happened with the Press Code and Lisbon Treaty.

Bilčík said Slovakia would not have suffered any consequences if it had waited until the end of the year to approve the Lisbon Treaty.

Slovakia is the ninth of the EU's 27 member states to have ratified the treaty, which can only be considered valid if passed by all members. It should come into effect on January 1, 2009.

"I see the treaty's biggest added value being in the political process, which has proven that 27 member states can agree on something," Bilčík said.

He added that, just like any other treaty in the history of European integration, this one is a product of compromise.

It is made up of enormous provisions, the exact meaning of which are not always clear, he said.

"The result of these provisions will show in practical use," Bilčík added.