No end in sight to property price inflation

REAL estate guides about Bratislava and other areas of the country attractive to foreign investors should start carrying this warning about the prices: "Not for the lily-livered". 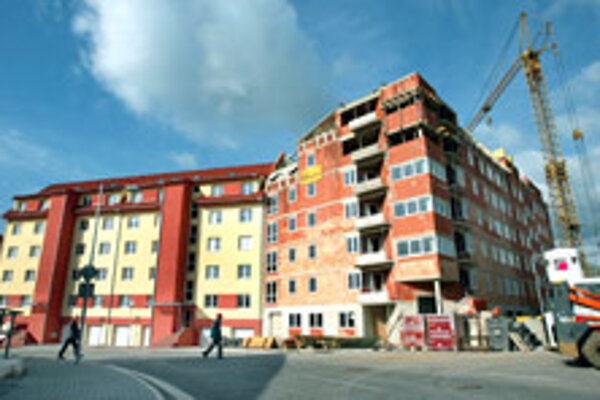 Experts predict that new housing projects will push down the prices of old apartments across the country. (Source: Sme - Ján Krošlák)
Font size:A-|A+

REAL estate guides about Bratislava and other areas of the country attractive to foreign investors should start carrying this warning about the prices: "Not for the lily-livered".

Over the past year, the prices of both newly built and older apartments have jumped due to massive demand and expectations ahead of the adoption of the euro in January 2009.

However, prices have remained steady in April, and even scaled down a bit in some locations.

Market watchers say they are wary of making predictions because so many factors are influencing prices: the switch to the euro, the mortgage crisis in the United States, a potential change in how banks finance housing, and the high number of housing projects under way, just to name a few.

In the last quarter of 2007, a square metre in the Bratislava Region cost Sk56,019, while in Košice it cost Sk29,477 per square metre. As recently as the year before, an apartment in Bratislava cost Sk43,661 per square metre, according to the National Bank of Slovakia.

Apartment prices have risen in line with the Slovak population's purchasing power, said Jaroslava Zapletalová of the Housing Institute think tank. "In Slovakia, there is still a higher demand than supply."

It's mainly the middle and upper-middle classes, which have more financial options, that are fuelling the upturn in prices, Zapletalová told The Slovak Spectator.

Advantageous loans tailored to young people's needs are also feeding the price hike and pushing up demand, she added.

Daniela Danihel Rážová of Bond Reality agrees that the population's rising living standard is the main driver of the market.

"But the development has not been equally distributed across the country," Rážová told The Slovak Spectator. "Large price fluctuations are evident in locations where strategic investors have announced their interest."

The National Bank of Slovakia, which monitors the development of real estate prices quarterly, estimates that the rise in the price of apartments and houses should fall from last year's 24 percent to 15 percent this year.

But she added that there are some small signs this trend is changing.

"Over the past two to three weeks, apartment owners have been bringing down prices by Sk200,000-Sk300,000," Rážová told The Slovak Spectator.

According to Rážová, the inflated prices of older apartments are a result of expectations ahead of the adoption of the euro, when the owners assume that there will be a huge demand for real estate as a form of investment.

"Since the owners have not found buyers, they started to make their prices more realistic," she said.

As far as the market for newly built houses is concerned, no dramatic fluctuations are expected, Rážová said.

Prices are climbing fastest in Bratislava, but they are also rising in Prešov, Košice and Žilina. The cost of apartments in Trnava have spiked as well under the influence of nearby Bratislava, Zapletalová said.

However, Zapletalová believes that the Slovak housing market hasn't overheated yet.

She said she expects prices to continue to rise over the next two to three years, along with the cost of amenities, such as cultural centres and supermarkets.

But Zapletalová said the rates for administrative buildings should level off soon since a considerable number of projects are wrapping up, which should satisfy demand.

Rážová is cautious about predicting developments in the Slovak market.

"Every day we read several contradictory opinions from different experts," she said. "There are many factors that could influence the market. Firstly, the planned adoption of the euro and secondly, the huge number of planned projects with tens of thousands of apartments."

And Rážová agrees that the mortgage crisis that has been pounding the market in the United States could indirectly influence banks trying to decide whether to finance projects or provide mortgages in Slovakia.

Rážová said she is certain that the prices of older apartments will sink.

"The massive construction of new apartments, which in terms of size and price will be comparable to the apartments that are on offer today, will definitely push down the prices of older properties," Rážová told The Slovak Spectator.

Rážová said that prices of new apartments will grow based on the quality, location and the competition in the location.

The increased number of housing projects will also prolong the time needed to sell the apartments, while developers have to invest more into marketing and seeking new avenues to address clients, Rážová noted.

Last year, developers completed 16,473 apartments across the country, which is a 14-percent increase year-on-year, according to the Hospodárske Noviny financial daily.

And by the end of the year, there were about 55,000 apartments under construction in the country. But even that number will not completely satisfy the demand, the daily added.