AFTER years of living in grey, communist-style apartment blocks, Slovaks have taken an interest in more appealing housing. 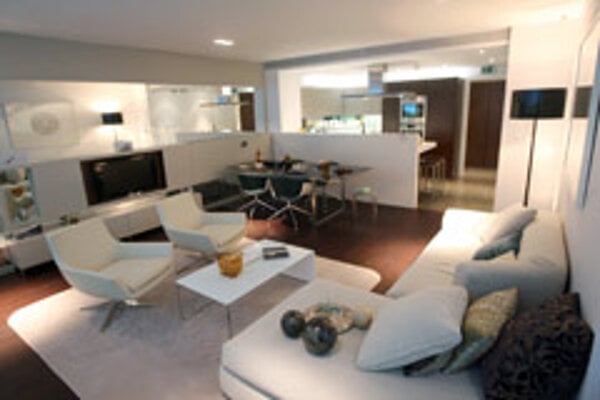 AFTER years of living in grey, communist-style apartment blocks, Slovaks have taken an interest in more appealing housing.

Luxury apartments at future swanky addresses have been selling briskly, proving developers' expectations were on target.

Apartments and penthouses at the Eurovea complex on the Danube embankment, which developer Ballymore Properties is describing as the future centre of Bratislava, started selling in mid-March. As well as housing, the complex will consist of a shopping mall, a five-star hotel and administrative offices.

The total cost of the first phase of the project, which will be completed in 2010, is €266 million.

From March 15 to 16, the first weekend Eurovea apartments were put on the market, 86 of its 254 units sold.

"We are pleased that our predictions about the demand for such apartments in Slovakia were accurate," Patrícia Hradilová, spokesperson for Ballymore Properties, told The Slovak Spectator.

In the month since then, four more properties in Eurovea have been sold, increasing the total to 90.

Hradilová said that Ballymore received 2,500 inquiries before sales and marketing campaigns had even begun.

"People are interested in smaller and larger apartments in all four apartment blocks, as well as penthouses," Hradilová said.

"Most of our clients are Slovak, which pleases us tremendously," Hradilová said. "But we are receiving a high amount of interest from Austria, Great Britain and Ireland."

She added that Eurovea had focused its marketing campaign on those countries, as well as the Czech Republic and Hungary.

River Park, another luxury housing complex, is under construction on the Danube embankment below Bratislava Castle. Its developer, J&T Real Estate, which is a member of J&T Group, reported in December that it had sold or reserved 60 apartments ahead of its early 2009 opening, the SITA newswire wrote.

This modern multifunctional centre will consist of a residential area with 208 apartments, a five-star hotel, administration offices, shops, and restaurants, the project's website writes.

"If demand exceeds supply, prices might increase," Maroš Sýkora, spokesperson of J&T, told the Pravda daily in June 2007, when the company started selling the apartments. "They will certainly not decrease."

The price of River Park apartments from 70 to 535 square metres, including terraces, range from Sk10 million to Sk70 million, which is equal to Sk130,000 per square metre, the daily wrote in June.

Sýkora told SITA in December that most of River Park's clients are Slovak, but that foreigners are purchasing property there as well.

But the interest in luxury real estate is not limited to property flanking the Danube.

Parkville, a complex of 10 villas that offer panoramic views of the capital, will be completed in October 2008.

It will consist of one-, two-, three- and four-bedroom apartments and 10 penthouse units.

"The interest in Parkville has been very strong," John Sharpe of Orco Slovakia, Parkville's developer, told The Slovak Spectator. "We have sold 52 out of total 92 apartments. We currently have five reservations and 35 apartments left for sale."

"The apartments with views of the castle from the living spaces or from terraces seem to be the most interesting for buyers," Sharpe added.

Sharpe also confirmed that the majority of buyers are Slovak.

"At the beginning of the project we often received inquiries from Britain, Ireland, Spain and Italy," Sharpe said. "Now that we are only six months away from the completion of construction, almost all our inquiries and buyers are Slovaks looking for a quality home."

Location is one of conditions for calling a housing unit luxurious. Others are quality, comfort, comprehensive services and prestige, Daniela Danihel Rážová, director of the Bond Reality company, told The Slovak Spectator.

The prices of properties deemed luxurious usually start at Sk100,000 per square metre without VAT.

But not all the above-standard projects that developers have labelled luxurious really are, Rážová said.

"Luxury means something different to everyone," she said.

"Foreigners buy it as an investment, but Slovaks sometimes see it as a place to live," she told The Slovak Spectator. "This ratio changes constantly."

Interest in luxurious housing is not completely concentrated in Bratislava.

In Košice, some of the apartments in the Cassovar complex, which is being constructed on the premises of a former brewery, have already sold, even though construction hasn't begun yet, the Nový Čas daily wrote.

The complex began selling apartments in the Sk3.2 million price range in early December. After two months, 15 of 88 apartments had been sold and 33 more were reserved.

The complex also has apartments that measure 220 square metres large and include a 110-square-metre terrace. The cost is Sk16.5 million.

According to the project's website, Global Group wants to complete the residential part of Cassovar in August 2009. The other parts - a hotel, offices, and parking lot - will be completed a month later.

More luxury projects in the pipeline

In Košice, Letterstone has unveiled its plan to build Central Park, a new complex with 469 luxurious apartments, at a sought-after address close to the city's teaching hospital. Underground parking, relaxation centres, a shopping mall and a hotel will be part of the development.

Letterstone plans to commence construction in June and complete it by the middle of 2011, according to its website.

And the Orco Property Group plans to turn the VÚB bank's former building in Bratislava's Old Town into City Gate, a combination of luxury housing and a shopping gallery, the company writes on its website.