ALTHOUGH the medieval Slavonic minstrels, igrics, would hardly understand what a film is, they would probably be pleased to see that their golden miniatures have become symbols of great success in Slovak cinematography. 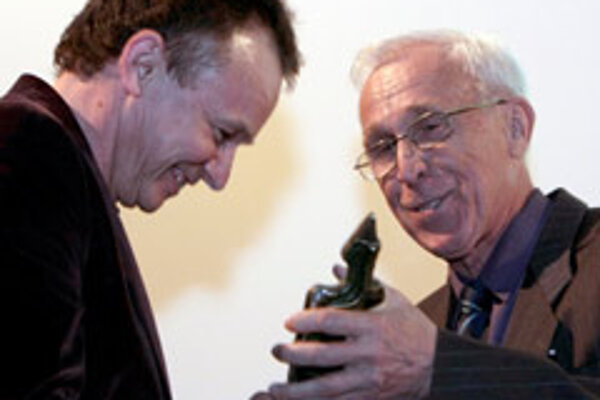 ALTHOUGH the medieval Slavonic minstrels, igrics, would hardly understand what a film is, they would probably be pleased to see that their golden miniatures have become symbols of great success in Slovak cinematography.

Instituted in 1967, but banned by the communist party for political reasons from 1970 until its re-establishment in 1993, this prestigious prize has been presented to 71 filmmakers and actors, several of whom joined the ranks of Igric holders on April 8, 2008.

A renowned director, Juraj Nvota, was awarded for his feature film Muzika (Music), becoming one of few people who can pride themselves on two Igrics. This success was surpassed only by Martin Šulík, whose Igric for a documentary film about the deceased filmmaker Martin Slivka added the fourth Igric to his collection. In addition, there were three first-time winners: Róbert Šveda for the writing and directing of his new television film Démoni (Demons), Ľuboš Kostelný for his performance in Nvota's Muzika, and Ivana Šebestová for her animated film Štyri (Four). Beside the Igrics, 18 creative prizes and three film critics' prizes were awarded.

The organisers of the competition - the Slovak Film Association (SFZ), the Union of Slovak TV Producers and the Literary Fund - expressed their belief that this event enjoys an important place on the Slovak filmmaking scene.

"Slovak movie artists obviously regard the Igric Award as a great recognition," said Štefan Vraštiak, president of the SFZ. "Moreover, it encourages them in their creativity, which is very important nowadays."

Vraštiak also emphasised that financial support, which is a part of the award, is not insignificant for the artists.

"These resources sometimes literally help our filmmakers survive," he told The Slovak Spectator. "Since they often have troubles getting money for new projects, this grant, though not excessive, can provide a valuable motive to start working on their films."

In Vraštiak's view, the Igric Awards are exceptional in that they are also given to marginal genres and works.

"Unlike other competitions, we award television and students' movies, theoretical works, reviews and DVDs," he stated.

Although three fewer works were submitted to the competition compared to the 51 submitted last year, Vraštiak considers the trend a positive one.

"The structure of the submitted pieces has changed," he observed. "This year, we saw more student movies and there were, fortunately, more feature films as well, which finally allowed us to make some comparisons."

Although Slovak film and TV production cannot be labelled completely unique, there are seemingly some distinguishing features.

"It is always important that movies reflect the reality in which the society lives," Vraštiak said. "Both Muzika and Démoni, the most successful feature films of this season, managed to portray common people and their problems in a very lifelike way."

Slovak cinematography, however, has not always flourished as well as today. Two years ago, only one full-length film was produced in Slovakia and, as Vraštiak mentioned, the situation was probably the worst in Europe.

"Now the filmmaking scene is beginning to come back alive," he stated. "This year, the jury could evaluate as many as six feature films, which is almost incredible given the past state of affairs. What is more, film students have become very ambitious and there have been instances when they have defeated their own teachers."

However, František Jurišič, chairman of the jury and professor in the Department of Animation at the University of Performing Arts in Bratislava (VŠMU), questioned the claim that the Slovak film industry has actually recovered from the crisis.

"I will believe it only if such a high number of films appears again in the future," he told The Slovak Spectator. "One swallow does not make a summer. The movies that took part in this year's competition had all been finished in 2007 more or less by chance and this may not be repeated any time soon."

Jurišič emphasised that animation and TV production in Slovakia has still been poor.

"Apart from a few enthusiasts, nobody creates animated movies, for children or adults," he sighed. "There are not enough TV and film producers to stimulate our film-making scene. Quality comes only if quantity is sufficient."

"More and more students are becoming contemporary movie creators," he said. "Hopefully, they will persist in their efforts and make up for lost time."