SLOVAKIA'S much-criticised new Press Code has been declared acceptable by the main centre-left grouping in the European Parliament. The Party of European Socialists (PES), of which Slovakia's main governing coalition Smer party is a provisional member, regards the new Press Code as fulfilling all European Union conditions, the group's vice-chairman, Austrian MEP Hannes Swoboda, announced after a working group meeting on April 23. "Currently, I see no reason for any action or decision concerning this media act," Swoboda said, according to the SITA newswire. 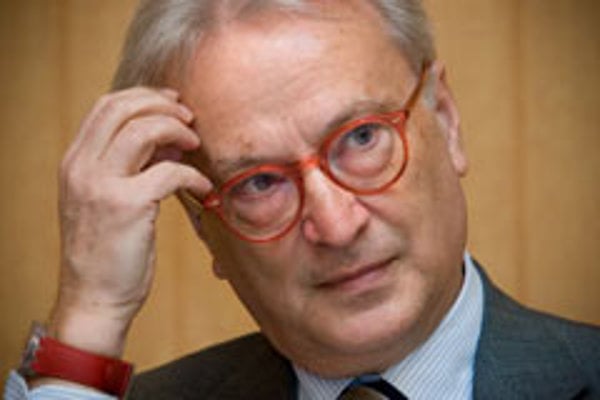 SLOVAKIA'S much-criticised new Press Code has been declared acceptable by the main centre-left grouping in the European Parliament. The Party of European Socialists (PES), of which Slovakia's main governing coalition Smer party is a provisional member, regards the new Press Code as fulfilling all European Union conditions, the group's vice-chairman, Austrian MEP Hannes Swoboda, announced after a working group meeting on April 23. "Currently, I see no reason for any action or decision concerning this media act," Swoboda said, according to the SITA newswire.

Speaking to The Slovak Spectator, he defended the PES decision to back the Press Code, saying "we are not an instrument of internal politics," adding that the Code "does not contradict any principles we hold."

He said that despite criticism of the Press Code "the issue is not black and white," and that "many or all of its provisions can be found in media laws elsewhere in Europe." Referring to ongoing criticism of the Code, Swoboda said "if there are new problems we will look [at it] again."

Swoboda met Prime Minister Robert Fico in February this year, and said at the time that if OSCE reservations about the Press Code were not taken into account it would definitely influence any decision to re-admit Fico's Smer party to membership of the PES, from which it was suspended in 2006 after forming the present coalition with the nationalist Slovak National Party (SNS). Asked by The Slovak Spectator about those comments, given Smer's subsequent re-admission, he responded that changes had been made to the Press Code. He went on to say that the main target of the OSCE's criticism - the so-called right of reply - was similar to laws in France or Sweden.

Swoboda commented that there was a great deal of irresponsible journalism and some restriction of journalists' prying into the private lives of public figures was justified. He also said that "much worse [laws were] introduced under the previous government ... the Dzurinda government."

Another large faction in the European Parliament has taken a rather different position. According to Joseph Daul, chairman of the largest centre-right grouping, the European People's Party-European Democrats (EPP-ED Group), the European Socialists have condoned the Slovak Government's violations of press freedom. On April 23 Daul condemned what he called the opportunistic and irresponsible decision of the European Socialists, and in particular Swoboda's comments stating that the new Press Code was acceptable and compatible with "European conditions".

"I am astonished that the European Socialists do not want to see the direct threat posed by this law to press freedom and freedom of expression. This is a bad law adopted by the populistic Smer-SD Party of Prime Minister Robert Fico supported by the Slovak xenophobic and nationalistic Slovak National Party," Daul said.

"I am also astonished that the Smer-SD Party was re-admitted to the European Socialist Party without any change in the situation in Slovakia," added Daul, referring to the PES decision to end its suspension of Smer's provisional membership despite the ongoing coalition with the SNS.

In a press release, Daul also compared the Slovak Press Code to laws applicable in dictatorships such as Belarus. "By backing such laws, European Socialists are undermining the efforts and role of the OSCE", he said. He described the OSCE (the Organisation for Security and Cooperation in Europe), as a highly-respected organisation in Europe.

"The PES is destroying its own credibility," stressed Daul.

"We will continue to oppose attacks on the free press. Slovak citizens and Europe deserve a democratic press law. We shall not let down our friends in Slovakia", Daul concluded.

Vladimír Maňka, an MEP for the Smer party told the public service broadcaster Slovak Radio (SRo) on April 23 that the changes included in the Press Code were not against the European law. And, he said, they could also be found in the laws of other European countries. "We agreed that in the future, we would come back to it if any problems occurred in Slovakia, which none of us expects, and neither do they," Maňka told SRo.

By contrast, Zita Pleštinská, an MEP for the opposition SDKÚ, likened the Slovak Press Code to laws in Belarus, where the ruling government respects neither the opposition nor freedom of speech. "The blank front pages of Slovak dailies, published as a protest against the passing of the Press Code, which from this June will introduce non-democratic rules for the press in Slovakia, reminded me of Belarus," Pleštinská told SRo.

Grigorij Mesežnikov, President of the non-governmental think-tank the Institute for Public Issues (IVO), is convinced that by accepting the Press Code, the Euro-socialists were showing solidarity with Smer.

"It was a special-purpose decision," Mesežnikov stressed to The Slovak Spectator.
Moreover, if they had concluded that the Press Code was against freedom of the press, they would also have had to admit that they had made a mistake by re-admitting Smer to provisional membership of the grouping.

"If the Press Code had been declared unacceptable, they would have had to admit that Robert Fico behaved very incorrectly towards them. Which is in fact true, I believe," Mesežnikov told TSS.
"Fico promised the Euro-socialists that the Press Code would be changed according to the OSCE requirements. And this did not happen," Mesežnikov explained.

The OSCE's press freedom representative, Miklós Haraszti, who has been critical of the draft Press Code from the very beginning, said it is disappointing that recommendations regarding the right of reply were not implemented.

"As it stands now, the law would still fail to comply with Slovakia's OSCE commitments to protect media freedom," Haraszti said in an official OSCE media release in March.
According to Haraszti, the standards are clear: the right to either a correction or a reply should exist only where the claimant has a justified interest in correcting untrue or misleading information.

The International Press Institute (IPI) also sharply criticised the Code. IPI representatives sent an open letter to Ivan Gašparovič, Slovakia's President, in which they urge him to reject the disputed Press Code by refusing to sign it and returning it to parliament.
According to the IPI, the Act contains controversial changes to Slovakia's current media legislation.

"The Press Act will enable individuals, including politicians, to force newspapers to print replies to articles that have allegedly damaged their reputations", the press release reads.
The IPI has criticised the clause requiring replies to be printed whether or not their factual content is in question. "Replies must also be placed in the same position in the newspaper as the original article, and must be equivalent in size to the original article", emphasises the group's press release.

By contrast, declares the statement, the Act prevents newspapers from commenting on replies they are forced to print.

Following its approval by Parliament on April 9, the Code awaits the President's signature to become law.