Time to 'unleash the tiger'?

SLOVAKIA is planning to strengthen its military presence in Afghanistan. A gradual increase in deployment should result in between 250 and 280 Slovak soldiers serving as part of the NATO mission there by 2010, according to Defence Minister Jaroslav Baška. He was speaking on April 23, after talks with his Dutch counterpart, Eimert van Middelkoop. 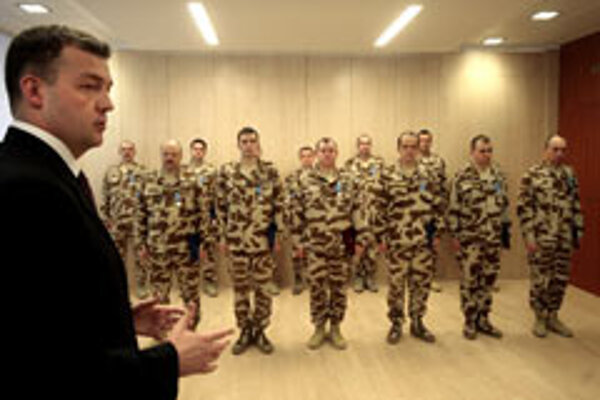 SLOVAKIA is planning to strengthen its military presence in Afghanistan. A gradual increase in deployment should result in between 250 and 280 Slovak soldiers serving as part of the NATO mission there by 2010, according to Defence Minister Jaroslav Baška. He was speaking on April 23, after talks with his Dutch counterpart, Eimert van Middelkoop.

However, a suggestion by Baška that Slovak troops might be allowed to take part in combat operations in Afghanistan has been contradicted by Prime Minister Robert Fico.

"We are aware that this mission is long-term and will cost us much, not only in terms of effort but also in terms of financial resources," Baška said, as reported by the SITA newswire.

In co-operation with the Dutch army, a 35-member guard platoon will serve in the Afghan province of Uruzgan, where Slovak soldiers should take over responsibility for protection of the Tarin Kut military base. Baška admitted it was a dangerous mission that could result in fatalities.

In Afghanistan, there are currently 69 Slovak soldiers, who are already serving in areas considered more dangerous than Uruzgan. Most of the military engineers are deployed in an enclosed military camp in Kandahar, where their main role is to secure the base.

"Perhaps in the future we will consider sending special units," Baška told journalists after his meeting with the Dutch Defence Minister.

"We do not want to just keep the tiger in the cage. We have special forces. Once a political decision is made, we must be prepared to let the tiger loose," Baška answered, when asked for specific details by the Sme daily.

Prime Minister Robert Fico is of a different opinion, however. He stressed to Sme that Slovakia's condition for sending soldiers to Afghanistan remains unchanged. "[Our] soldiers must be deployed within camps, without having any chance to join fighting activities," Fico told the daily.

According to Fico, Slovakia is a NATO member state and since operations there are a NATO concern the country should increase its contingent. However, Fico stressed that "A slight increase in the number of soldiers meets our obligations to NATO," adding "This [small increase, plus the exemption of Slovak troops from combat duties] is our fundamental condition," he added.

The increase in Slovak forces follows repeated requests by NATO for member states to increase their participation in the mission in Afghanistan. In particular, the Alliance has repeatedly stressed the need to strengthen its combat units in the country.

The latest call came in NATO's Bucharest summit declaration, signed by the leaders of NATO's member states on April 3. The declaration states that Euro-Atlantic and wider international security is closely tied to Afghanistan's future as a democratic state, free from the threat of terrorism. "For that reason, our UN-mandated International Security Assistance Force (ISAF) mission, currently comprising 40 nations, is our top priority", it says.

The declaration also states that it is important not to "allow extremists and terrorists to regain control of Afghanistan or use it as a base for terror that threatens all of our people."

"We ask other NATO nations to step forward with additional forces, as well," US President George W. Bush told the summit in Bucharest.

"If we do not defeat the terrorists in Afghanistan, we will face them on our own soil. Innocent civilians in Europe and North America will pay the price", he added.

Bush repeatedly stressed the need to continue fighting extremists in Afghanistan: "If we were to let up the pressure, the extremists would re-establish safe havens across the country, and use them to terrorise the people of Afghanistan and threaten our own".

Ivo Samson, a security analyst at the Slovak Foreign Policy Association, a non-governmental organisation, stressed that by enhancing its contingent in Afghanistan, Slovakia fulfils its obligations and duties stemming from the Bucharest summit.

Moreover, according to Samson, Baška seems to be more independent than his predecessor as Defence Minister, František Kašický; hence his publicly expressing an opinion which did not quite correspond with that of Prime Minister Fico. "He has alternative proposals for what Slovakia should do," Samson told The Slovak Spectator.

Samson also stressed that Slovakia's reputation within NATO would not suffer greatly if Fico enforced his standpoint: "The reputation of Slovakia is not too good at the moment," Samson said. "If Slovakia really increases its contingent, which is in any case just symbolic, its reputation will not worsen," he added.

"Slovakia has thus taken a symbolic role in Trans-Atlantic co-operation, and can maybe maintain its reputation as a reliable partner," Samson told The Slovak Spectator.

Slovakia has fewer than 600 soldiers deployed abroad. Last year, the government recalled about a hundred members of the engineer unit from Iraq.