PRIME Minister Robert Fico and his labour minister, Viera Tomanová, are engaged in an intensive campaign to - as they describe it - inform citizens about the perils of saving for their pensions through funds managed by private pension fund management companies. 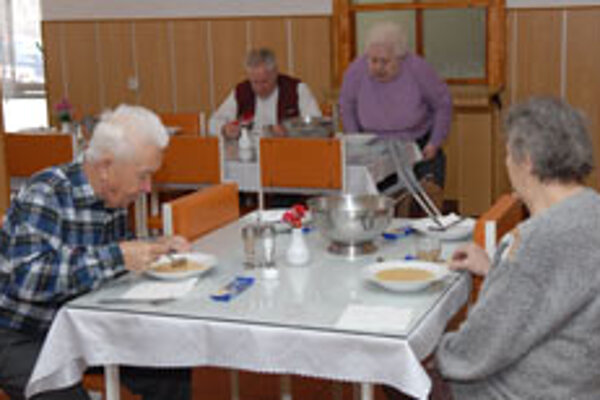 "Time to Decide" about future pensions says the ministry in its leaflet. (Source: SITA)
Font size:A-|A+0

PRIME Minister Robert Fico and his labour minister, Viera Tomanová, are engaged in an intensive campaign to - as they describe it - inform citizens about the perils of saving for their pensions through funds managed by private pension fund management companies.

Last year the government opened up the second, 'capitalisation', pillar of the pension system for six months, offering more than 1.5 million people the opportunity to leave the pillar from January until June 2008.

The second pillar was one of the main features of the Mikuláš Dzurinda government's old-age pension reform, allowing clients to redirect 50 percent of their social insurance fees into a private pension company, the so-called 'second pillar', with the rest going into what is known as the 'first pillar': the pay-as-you-go-system administered by the public social security provider Sociálna Poisťovňa.

The first pillar is 100-percent insurance-based, with disbursements that reflect the monthly amount paid into the account and the length of the savings' lifespan.

Fico and Tomanová have left no room for doubt about what they think about the second pillar and the policies of private pension fund management companies.

It is becoming evident that the global financial crisis has had a relatively huge impact on the gains of savings in private pension funds, Fico told media on April 23, backing his statements by referring to a report he received from Tomanová.

"I am not in the second pillar and I would recommend everyone to get out very quickly," Fico said, as quoted by the Sme daily.

Tomanová reported to the Fico cabinet on the impact that the credit crunch and the world financial-markets crisis might have on citizens' savings in private pension funds. Finance Minister Ján Počiatek said that Tomanová's information has not yet been provided in detail and that his ministry will work out a more detailed analysis.

Tomanová summoned a special briefing on April 23 to defend her ministry's campaign pertaining to the pension saving system and to warn about what the ministry calls 'major risks.'
The Labour Ministry has recently told almost two million Slovak households that there is "Time to Decide," via information leaflets about the old-age pension second pillar. The leaflet is part of the government's campaign.

However, shortly after the distribution of the leaflets started, private pension fund management companies called on the ministry to withdraw the "Time to Decide" flyer because, they say, it includes incorrect information.

The Association of Private Pension Fund Management Companies (DSS) said that the leaflet contains unambiguously incorrect information about the gains from the savings of their clients during 2007.
According to the labour ministry's booklet, DSS members were only able to produce gains on deposits in their growth funds - which include almost two thirds of second pillar deposits - of 0.85 percent, as opposed to the average pension paid by the social security provider, Sociálna Poisťovňa, which has grown by 15.2 percent over the past three years.

However, the Association of Private Pension Fund Management Companies said the ministry's calculations were misleading since gains stood at 3.5 percent. The country's central bank, the National Bank of Slovakia, has confirmed that growth funds produced gains last year at an average of 3.5 percent.

The ministry has defended its calculations by presenting different ways of calculating the number.
The pension fund management companies argue that the ministry has taken data between February 2007 and February 2008, presenting them as results for the last year: a time period which includes the decline that hit the performance of fund management companies in early 2008, due to the global financial crisis.

According to the companies, the leaflet might unfavourably influence the behaviour of their clients and also seriously harm the system of saving for old-age pensions with private funds. Tomanová said that the ministry fully stands behind the content of the leaflet and that the numbers reflect the average gains for the time period between January and December 2007, cleaned of inflation impacts for 2007 and fees that people pay to the management companies for administering their savings.
"The hysteria of pension management companies is a bit comical," Tomanová told a press conference. "It only shows that the leaflet in fact has pushed the right button and we have openly started talking about things that someone has tried to disguise."

Tomanová said that she also finds it strange that the association has been attacking a single number in the leaflet. "I dare to say that it is not the most important number," Tomanová said.
Tomanová's leaflet draws up a model situation: "Peter is 35 years old and has been working as a manager for 9 years. His monthly income is Sk25,000. Today he is considering whether he should stay in the second pillar or to quit it."

Based on the ministry's calculation it is disadvantageous for "Peter" to save for his pension in the second pillar and it would be slightly advantageous only if he had entered the pillar at the age of 25.

Tomanová said that the leaflet's conclusion is that "the second pillar is completely disadvantageous for 30, 35 and 40 year-old clients, or older client whose income is under Sk25,000."

"The second pillar is about making business and you can make business with a balanced budget and profit but, in the same way, a business can sink into red numbers and anyone who does not want to risk this and who is worried about the risk must become aware that this risk comes along with investments in capital markets," Tomanová said.

Tomanová also told the media about her concerns over the recent economic performance of the private pension fund management companies, suggesting that it has declined in the first quarter of 2008.
According to Sme, Ivan Barri, the executive director of the Association of Private Pension Fund Management Companies, confirmed that in the first quarter of 2008 gains in growth funds have declined. However, the pension fund management companies are administering more than just growth funds: they also have balanced-growth and conservative funds. Shares are only included in the portfolios of the growth and balanced growth funds.

"The clients can opt for the conservative funds, which do not invest in shares," Richard Sulík, a former advisor to the Finance Minister, told Sme.

From the beginning of 2008 up to late April, almost 24,000 savers had left the second pillar, according to social security provider Sociálna Poisťovňa. These clients were mostly aged between 43 and 53.