THE SLOVAK National Theatre (SND) marked the first anniversary of its move into the new building along the Danube on April 14. 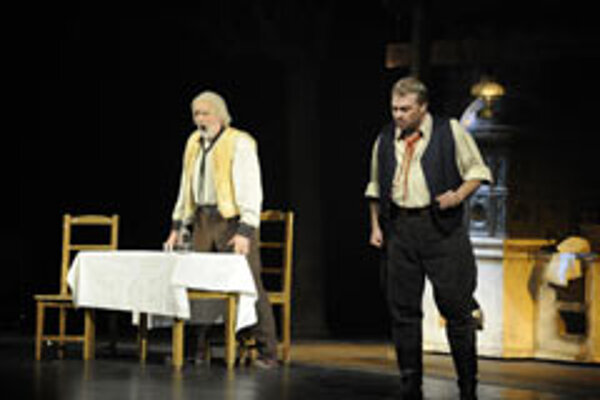 THE SLOVAK National Theatre (SND) marked the first anniversary of its move into the new building along the Danube on April 14.

It celebrated with a performance of Krútňava (The Whirlpool), an opera by Eugen Suchoň directed by Juraj Jakubisko.

The SND planned to perform Krútňava at the new building's opening a year ago but had to switch due to technical difficulties with the revolving stage. Instead, a gala evening featuring the theatre's top soloists was organised.

The SND still has to borrow a revolving stage from the Czech Republic.

Over the last year, the SND's three ensembles - opera, ballet and drama - have performed more than 500 shows in the new building. The building has also hosted ensembles from outside Bratislava and Slovakia, which performed a total of 26 shows, Zuzana Golianová of the SND told The Slovak Spectator.

The SND premiered as many as 15 pieces in the new building. The drama premiered 10 new shows, followed by the opera with three and the ballet with two.

The building's construction began in 1986.

At that time, the cost was projected at Kčs874 million, but various challenges, including the fall of communism, pushed the price tag to Sk5 billion. The theatre seats 1,700. The SND also has a historical building at Hviezdoslavovo Square.

The area around the new building will become a fancy address by 2010, when the luxury Eurovea development is expected to be completed.