PABLO González, a young Spanish conductor, summed up the spirit of the Central European Music Festival (SFKU), which took place in Žilina from April 21 to 26. 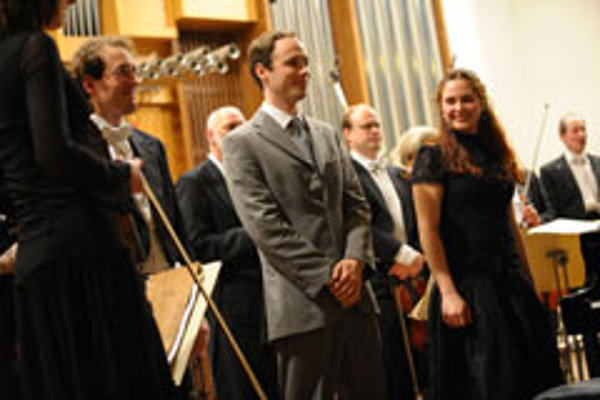 PABLO González, a young Spanish conductor, summed up the spirit of the Central European Music Festival (SFKU), which took place in Žilina from April 21 to 26.

"Music is here to bring out the similarities between people and support them in building their self-knowledge," he told The Slovak Spectator. "Having an inner sense of cooperation, it is an impulse for team work, a way of understanding human beings and a common goal that transcends differences."

González was one of many young musicians who attracted music lovers to the festival from across the country, as well as abroad, proving that classical music has a devoted and sizeable audience in Slovakia.

The SFKU was founded in 1991. According to its organisers, it quickly became an internationally respected event and one of the three most prestigious classical music festivals in Slovakia.

Various cultural institutes and embassies usually contribute, with the Spanish Embassy being especially involved this year.

"The SFKU's uniqueness is in its focus on young artists," said Iveta Korbačková from the Slovak Musical Centre, which is the main organiser of the event. "The maximum age is 32 for instrumentalists and 35 for conductors and vocalists."

The SFKU's structure is also different from other festivals.

"It is rare for a festival to combine performances with elements of competition," Korbačková told The Slovak Spectator. "We have managed to do so thanks to our cooperation with renowned music critics and experts from neighbouring countries."

The festival awards several prestigious prizes each year, including the Music Critics' Prize, the Audience Prize and the Mayor of Žilina Prize.

Korbačková stressed that despite the participants' youth, they are not amateurs.

"Only top performers have been invited to the festival, the majority of whom have won the most prominent world competitions, including the Queen Elisabeth International Music Competition in Brussels or the International Competition of ARD Munich," she stated.

"Artists who were invited to perform at [this year's] edition of the SFKU represented 13 states," she told The Slovak Spectator. "Most of them were visiting Slovakia for the first time. This is crucial, since western musicians in particular find the opportunity to perform for Central European public very attractive."

Nonetheless, the artists have very busy schedules due to their budding careers, so getting them to perform at the festival brought some challenges.

"We talked them round by saying it is a notable, interesting project with favourable conditions and great potential," Korbačková said. "We also try our best to adjust our programme to their schedule, be it a recital or orchestral concert."

Korbačková said the SFKU's professionalism and growing prestige are not the only reasons artists choose to take part in the event.

"These renowned musicians enjoy the challenge of comparing their interpretive skills with others," she told The Slovak Spectator. "The Fatra Palace of Art concert hall, with its perfect acoustics and appreciative audience, also plays a role."

As many as 15 solo musicians and six ensembles performed at the festival, with one concert every evening.

"Some people are regular visitors to the SFKU and many do not miss a single performance,"

Korbačková observed. "This year, visitors were obviously mostly attracted by orchestral concerts. For residents of Žilina, the festival represents a certain culmination of the concert season, even though the season still continues."

After a week of excellent performances, the international jury announced the winners of this year's awards. The Music Critics' Prize for the most distinguished performance at the festival went to Anna Vinnitskaya, a Russian pianist who also won the prestigious Queen Elisabeth International Music Competition 2007 in Brussels. This prize gives her the opportunity to perform at the next festival. Vinnitskaya also received the festival's Audience Prize.

Clément Saunier, a French trumpeter and winner of the 2002 International Music Competition in Italian Porcia, said that his main motivation for coming to Žilina was not the competition, but curiosity.

"I do not know this part of Europe very much," he told The Slovak Spectator. "After all, each artist has a sense of discovery that can never be satisfied."

He also pointed out that interesting partnerships were born thanks to his participation in the festival.

"I have arranged a meeting with Anna [Vinnitskaya] in Paris and we will probably cooperate on a project," he said.

And González agrees that meeting other artists and sharing the musical experience with them is the most important reason for taking part in a festival like the SFKU.

"The decisive reason for my coming to Žilina was the chance to get to know other people who are interested in the same discipline as I am," he said. "I, for example, hugely enjoyed working with Clément and Anna. Some fruitful cooperation will hopefully follow this encounter."