A DECADE after European Union leaders made their historic decision to launch the single European currency, Slovakia has been given the green light to become the 16th EU member of the eurozone. After joining the European Union in 2004 and entering the Schengen passport-free travel zone in 2007, Slovakia is now the first of the Visegrad Four countries to pass the last significant milestone on the way to full membership of the European family. 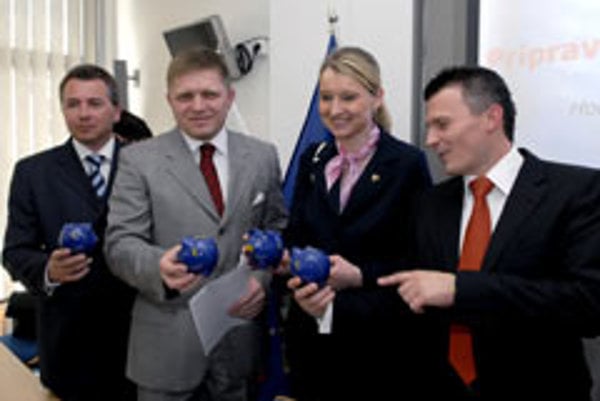 A DECADE after European Union leaders made their historic decision to launch the single European currency, Slovakia has been given the green light to become the 16th EU member of the eurozone. After joining the European Union in 2004 and entering the Schengen passport-free travel zone in 2007, Slovakia is now the first of the Visegrad Four countries to pass the last significant milestone on the way to full membership of the European family.

The European Commission's (EC) 'yes' to Slovak euro-membership, which had been anticipated since the release of its spring economic forecast for 2008 and 2009, will fuel further economic growth, both Slovak state officials and market watchers agreed. Prime Minister Robert Fico was quick to stress that he sees the EC's approval as an expression of trust in his government.

The EC stressed that Slovakia will now have to speed up practical preparations for a smooth changeover while carefully watching its inflation and fiscal policies.

On May 7, the European Commission, after releasing its regular Convergence Report on Euro Readiness, said that Slovakia meets the criteria for adopting the euro and made a proposal to the EU Council to this effect, according to an official media release. The report found that nine other countries aspiring to adopt the euro were making progress but said they did not yet meet all the conditions for euro adoption.

EU Council finance ministers will make the final decision on Slovakia's adoption of the euro in July, after the European Parliament has given its opinion and EU leaders have discussed the country's accession to the eurozone at their June summit, the EC wrote.

"Slovakia has achieved a high degree of sustainable economic convergence and is ready to adopt the euro on 1 January 2009," said Joaquín Almunia, the EU Commissioner for Economic and Monetary Affairs, on May 7. "However, to ensure that the adoption of the euro is a success, Slovakia must pursue its efforts to maintain a low-inflation environment, be more ambitious with regard to budgetary consolidation and strengthen its competitiveness position."

The commissioner encouraged other EU member countries on the road to the joint currency to pursue and intensify their efforts as "it is clearly in their long term interest."

The convergence report also assessed the progress that Bulgaria, the Czech Republic, Estonia, Latvia, Lithuania, Hungary, Poland, Romania and Sweden have made towards the euro.

Prime Minister Fico said that the euro is an historic chance for Slovakia. Fico is convinced that 2009 is the best year for the country to enter the eurozone.

The adoption of the euro is a continuation of Slovakia's success story, Fico told media at a press conference at the EC representation in Slovakia in response to the release of the EC convergence report.

"The recommendation is an appreciation of the good economic and financial policies," said Fico. "We are convinced that the EC report is also an expression of trust towards Slovakia and its government."

In 2006 some catastrophic scenarios had predicted Slovakia failing, but none of them came true, said the prime minister, who promised to pursue responsible financial policies.

However, Fico also stressed that his cabinet has behaved responsibly towards the people and, as he put it, "has not sacrificed everything in the name of the euro."

According to Fico, people should not worry about the euro, but rather understand it as a huge chance for every single citizen.

"The government is aware of the risks and temporary problems that might be linked to the adoption of the euro," said Fico. "I assure every citizen - be they a young person, an employed person or a pensioner - that we will act in such a way that the euro will not benefit only businesses, but every citizen who lives on Slovakia's territory."

Fico concluded that no one doubts that Slovakia will continue its economic growth, which he said will be among the highest in the European Union.

The governor of the National Bank of Slovakia (NBS), Ivan Šramko, said that the EC decision will undoubtedly have an impact on the future development of the country's economy.

"Slovakia has made the last step towards a full-value integration of the country into the European Union," Finance Minister Ján Počiatek told the media, adding that the process was extremely demanding and required immense effort on the part of the government.

Počiatek restated that the euro is likely to bring more advantages than disadvantages to the country.

According to the EC's assessment of Slovakia, 12-month average inflation in March was 2.2 percent, well below the Maastricht reference value calculated at 3.2 percent for the same month. The commission considers the rate a sufficient margin to calm inflation concerns. The commission recommended that Slovakia remains watchful and sustains low inflation by use of wage and fiscal discipline and further structural reforms to improve the functioning of product markets.

The Slovak crown has been part of the European Exchange Rate Mechanism (ERM) II since 28 November 2005 and, according to the commission, the crown has not experienced severe tensions, and the reasons for its strengthening value against the euro are sound.

"The next important milestone will be the June summit of the European Council, which should adopt a political decision on Slovakia's entry to the eurozone, and the July meeting of the Council of EU finance ministers where the euro-Slovak crown conversion rate will be defined," Slovakia's cabinet appointee on the euro, Igor Barát, told The Slovak Spectator.

In August, obligatory dual pricing will start; at the same time, the national mint in Kremnica will start producing euro coins with Slovakia's national designs, and the country's central bank will borrow euro banknotes from the European Central Bank (ECB), Barát said.

In September, the NBS will start delivering euro banknotes to the country's banks, who will start selling so-called 'starter packs' of euro coins to the public, Barát added.

"All this will be accompanied by an intensifying information campaign," said Barát.

The campaign will reach it peak in the second half of 2008 with the state saving the most important projects, including television slots, and a mail delivery containing a euro-calculator for every household, for that period, Barát told The Slovak Spectator.

"There will be special projects for sensitive groups such as seniors, physically and mentally disabled people, citizens living in social care homes, and national minorities, specifically the Roma community," Barát said. "The main focus of the campaign will be clear, understandable information."

Barát said he does not expect there will be any complications now that Slovakia has got the go-ahead from Brussels.

"The euro is practically certain," Barát said. "There is no reason for complications; the transition was smooth in 15 countries and it will be smooth in Slovakia as well."