ON MAY 1, Iveta Radičová, an opposition MP for the Slovak Democratic and Christian Union (SDKÚ) party, began collecting signatures in Komárno for a citizens' petition which is intended to back her bid to become president. Presidential elections will take place in spring 2009. If she is successful, Radičová would be the first woman to serve as Slovak head of state. 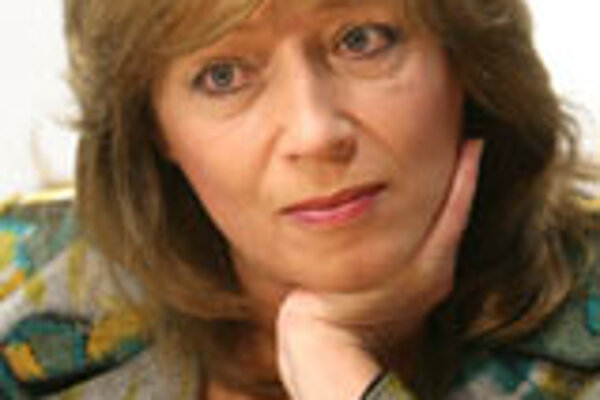 ON MAY 1, Iveta Radičová, an opposition MP for the Slovak Democratic and Christian Union (SDKÚ) party, began collecting signatures in Komárno for a citizens' petition which is intended to back her bid to become president. Presidential elections will take place in spring 2009. If she is successful, Radičová would be the first woman to serve as Slovak head of state.

"In this phase [of the campaign], I am interested in dialogue with citizens, and feedback. I would like to learn what people are concerned about in everyday life, what they are worried, or happy about," Radičová told The Slovak Spectator.

Her opponent will be the sitting president, Ivan Gašparovič. Both political analysts and polls suggest that Gašparovič and Radičová will be the two main candidates.

But Gašparovič has not so far started collecting signatures; nor has he prepared any campaign.
"The President tries to work, as he resolved to do in 2004, when people put their trust in him, and he sees no reason to start his campaign one year before the elections," presidential spokesman Marek Trubač explained to The Slovak Spectator.

According to Trubač, for Gašparovič campaigning would be premature: "Those who are not known to the public, who have been active for just a short time in politics, and whose actions and opinions are not familiar with the public, must define and profile themselves as candidates," Trubač stressed.
Radičová has been an MP for less than two years, though she served as a minister before being elected to parliament.

According to a poll by the MVK agency, if elections had taken place at the end of February 2008, Gašparovič would have won them in the first round, taking 51.9 percent of votes. To win in the first round of the election, it is necessary for a candidate to get more than one half of the total votes cast.

In second place would have been Radičová, with 26 percent of support, and in third Ján Slota, the Slovak National Party (SNS) leader, with 6.6 percent.

But according to a simulated presidential election conducted by the news website Aktuálne.sk at the beginning of April, Radičová would have won. On April 18, it published the results of the second round, in which Radičová received 65.6 percent support, while her competitor Ivan Gašparovič was backed by 34.4 percent of internet voters. In the second round of the virtual elections, in which participants chose between Radičová and Gašparovič, Aktuálne.sk recorded 16,497 votes.
Both Radičová and Gašparovič agreed that they wanted to be citizens' candidates, and that they would collect voters' signatures to back their candidacies. To become official candidates, each of them must have the signatures of either fifteen MPs or 15,000 citizens.

"Gašparovič will probably qualify for the elections like he did four years ago: he will deliver a citizens' petition and will also be supported by the signatures of 15 MPs," the chairman of the non-parliamentary Movement for Democracy (HZD) party, Jozef Grapa, was quoted as saying by the SITA newswire.

HZD is Gašparovič's "mother party", but he enters the elections with the support of the main governing party, Smer.

Gašparovič himself stressed at the beginning of April, in comments to the financial daily Hospodárske Noviny: "The president should be the guarantor of democracy; and to do so, it is inevitable to shift from being a partisan candidate to a non-partisan one, though that does not necessarily mean non-political."

Radičová expressed a similar view. She decided to collect signatures, although her candidacy is supported by all three parliamentary opposition parties. "The president, male or female, is elected directly by citizens in Slovakia, and I really want to court the citizens' mandate, so that it is they who support my candidacy. I simply want it this way," Radičová stressed to The Slovak Spectator.

She also went on to explain that she thought candidates stood little chance if they had only party support, or only citizens' backing.

Beginning in April, Radičová was backed as their presidential candidate by all three parliamentary opposition parties: the SDKÚ, the Christian Democratic Movement (KDH), and the Party of the Hungarian Coalition (SMK). The KDH hesitated before supporting Radičová, apparently finding her views too liberal.

"After long, difficult, but correct negotiations, we managed to unify and agree on a joint statement by the KDH and Mrs. Iveta Radičová. This is the reason [why we will] support Iveta Radičová for the post of President of the Slovak Republic," the KDH chairman, Pavol Hrušovský, announced on April 4. Hrušovský also added that "The movement is aware that she [Radičová] does not have absolutely concordant views in some cultural-ethical issues."

Radičová agreed with the KDH representatives on a joint statement, which says - among other things - that they "consider the protection of the family crucial".

"Family life, marriage and parenthood, which are sensitive and fragile, require strong support and legal protection. Any change in the legal protection of such a complex issue can be made only after extensive public discussion and after having been agreed upon by all society," the statement says.
The National Council of the SMK expressed its support for her as early as March. The SMK and the other opposition parties recently fell out over their strategy for opposing the new Press Code. But in spite of this, Radičová will continue to seek the support of the SMK and intends to meet its representatives.

Radičová stressed that she was ready to meet bilaterally with all parties, including the SMK: "I am ready to present my vision and my programme, given the interest shown in it, to the [governing] coalition parties as well," Radičová said.

"And of course, I am also ready to introduce myself as a potential candidate to other institutions, like our churches," Radičová added in comments to The Slovak Spectator.

The last presidential elections in Slovakia were held in 2004, in the first half of April. They were the country's second consecutive direct presidential elections, and produced a surprise result.
In the first round, Gašparovič, considered an outsider, edged former foreign minister Eduard Kukan into third place. In the second round, he faced his old party boss Vladimír Mečiar, a former prime minister and leader of the Movement for a Democratic Slovakia (HZDS). Gašparovič won easily, with 1,079,592 votes - 59.91 percent - and became the third president in modern Slovak history.
Gašparovič took office in June 2004, replacing Rudolf Schuster, the former mayor of Košice, who himself had triumphed over Vladimír Mečiar in a second-round contest in 1999.

Michal Ruttkay, head of the advertising agency Creo, Young & Rubicam, who has experience in politics - for instance working on the KDH's election campaign - told The Slovak Spectator that President Gašparovič has an advantage given that he enjoys the support of most of the governing coalition. The HZDS is the only coalition party which is not backing his candidacy. Ruttkay also regards Gašparovič's "consensuality" - that is, his efforts to avoid the confrontation, and therefore also the potential mistakes, which could lead to negative voter perception - as another of his advantages.

Ruttkay told The Slovak Spectator that he believes the position Gašparovič has established as a 'people's president' will attract widespread support of people who prefer to view public affairs from the point of view of their individual interests, for instance on issues like the protection of the family, and securing its primary interests.

"Moreover, by the time the elections are held, I don't expect there to be any widespread disappointment with the current governing coalition, nor any [unusual] events which could lead to a change in the status quo," Ruttkay added.

The only thing that could, in theory, frustrate Gašparovič's supporters is the possible negative impact of euro adoption in Slovakia, Ruttkay thinks.

Gašparovič has the advantage, according to Ruttkay, of being the sitting president. He thinks that Radičová must thus set a clear vision, draw attention to her values, transparency and an untainted record. "She must be the hope for a dynamic change that can balance the current division of 'opposition versus coalition', and offer right-wing participation in the exercise of power," Ruttkay concluded.

Ruttkay thinks the main element affecting her campaign will be her relations with the political parties backing her, as well as the state of the whole opposition. Although the opposition bloc has united in supporting Radičová, their unity has failed over other issues.

"So their agreement on a joint candidate seems more like a calculation, not so much the consequence of their being convinced about her qualities and capacity for action, as of her good chances of becoming president," Ruttkay told The Slovak Spectator. "Of course, we cannot foresee the development of 'opposition scandals and upsets'," Ruttkay added, but he said that possible further disputes could threaten what he called Radičová's 'brave bid.'

"However, if we regard Radičová's candidacy as a test for a possible new SDKÚ leader, then her entering the competition could be a welcome alternative, which would at least make the presidential election more dramatic," Ruttkay added.

So far, few other possible candidates have emerged.

The only other runner to declare so far is Dagmar Bollová, who was an MP for the Slovak Communist Party (KSS) between 2002 and 2006. She wants to run solely as a citizens' candidate, and even left the KSS before the end April to allow her to do this. Ruttkay gave her very poor odds: "A candidate without the support of political parties clearly has no chance in the upcoming fight."

Ivan Gašparovič was an MP for the HZDS between 1992 and 2002, serving as speaker of parliament between 1992 and 1998. He quit the HZDS in 2002 after its leader, Vladimír Mečiar, refused to give him a place on the party's parliamentary list. The Movement for Democracy (HZD) party he founded failed to get any MPs elected in 2002, but in 2004 Gašparovič was elected president.

Iveta Radičová is a sociology professor. She served as minister of labour, social affairs and family for ten months between 2005 and 2006. In June 2006, she was elected as an MP for the SDKÚ, winning more preferential votes than any other SDKÚ candidate.