LESS than three months before the start of the XXIX Olympic Games in Beijing, only 38 Slovak athletes have qualified for the event, the SITA newswire wrote on May 3. 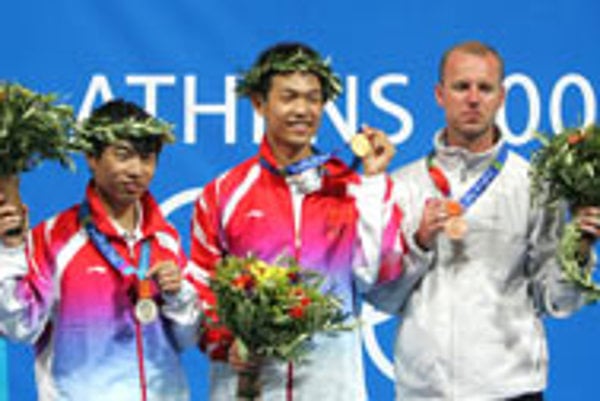 LESS than three months before the start of the XXIX Olympic Games in Beijing, only 38 Slovak athletes have qualified for the event, the SITA newswire wrote on May 3.

The Slovak Olympic Committee will complete its list on July 17.

Slovakia's delegation has decreased steadily since independence in 1993. If the current trend continues, this year's will be the smallest it has ever sent to the Olympics.

Slovakia sent 71 athletes to the 1996 games in Atlanta, USA. As many as 112 qualified for the Sydney games in 2000, but this included football and water polo players, without whom the delegation numbered 69 members.

By the 2004 games in Athens, the size of the Slovak delegation had already fallen to 65.
But in the midst of all this decline, shooting has experienced a significant rise in qualifying athletes. So far, three have represented Slovakia at each of the games since independence. And this year, as many as seven are going to Beijing.

"The list of shooters who will represent Slovakia in Beijing is complete," Miloslav Benca, the president of the Slovak Shooting Federation, told The Slovak Spectator.
Beijing will be the fourth games for Jozef Gönci, who has won two bronze medals in rifle shooting. His win in Atlanta was the first for an athlete from independent Slovakia. He won his second at the games in Athens.

The others who have already qualified are Daniela Pešková (rifle), Pavol Kopp (pistol), Mário Filipovič, Erik Varga, Zuzana Štefečeková (trap shooting), and Danka Barteková (skeet).
"This will be the first Olympics for all of them," Benca said.

When asked about the chances the shooters have of winning medals, Benca said that "there are always chances". But he added that the issue is arguably more complicated for Olympic shooting events.
"An athlete in a long jump has a number of attempts and only the best count," Benca told The Slovak Spectator. "But in case of shooting, for the athlete, when there are, for example 60 or 25 shots, the results of each shot is counted into the result of the whole competition. So if he misses one shot, he can bid farewell to a medal."

"In the starting field, the first 30 shooters have a chance to win medals," Benca continued. "Slovak shooters are somewhere between them. Gönci is amongst the first 15, the women are in the group of 15-20 and the position of the other men is similar."

"In all, they are in the group of shooters who have a chance to succeed," Benca concluded for The Slovak Spectator.

Regarding foreign competition, Benca noted the growing competition from China, the United Arab Emirates, India and other Asian countries.

"These countries invest huge amounts of money into professional shooting teams," said Benca.
According to him, the fact that there are 15 shooting disciplines at the games increases these countries' chances of winning medals.

The new venues Beijing has built for the shooting competitions confirm the large investment it is putting into the sport.

In April, 14 Slovak shooters, including all seven athletes with tickets to the Olympics, went to Beijing to attend Good Luck Beijing, a test event organised by the World Cup of the International Shooting Sport Federation.

The Slovak athletes also took the opportunity to try out the venue where they will compete at the games.

"The shooting range was very well built," Benca said. "It is very showy, but very effective.
"The only problem the organisers will have to solve is that it is quite windy, in particular in the centre. The starting field has 80 shooters and at the edges, where fences are, there is a smaller wind than in the middle. This was the only issue I observed."

At the Good Luck Beijing competition, Mário Filipovič won the men's trap title, proving that the shooters are training well.

Benca said the success the athletes have had at the Olympics and other competitions has earned the support of the Ministry of Education, even though shooting is a comparatively expensive sport.

"Of course, there is never enough money," said Benca. "A top firearm costs between Sk50,000 and Sk700,000. Other money is needed for gear, ammunition, and other things."

Benca also said that little money has been invested in shooting ranges over the last 20 years. And construction of a range in Trnava was stopped due to land ownership problems.

But the popularity and high interest young people have shown in the sport give hope that shooting will remain one of Slovakia's most successful sports.

"There are a lot of young people interested in shooting," Benca said. "And we are seeing results at junior competitions."