A LONG time ago, when there was neither television nor the internet in Slovak towns and villages, people used to entertain themselves with amateur theatre. 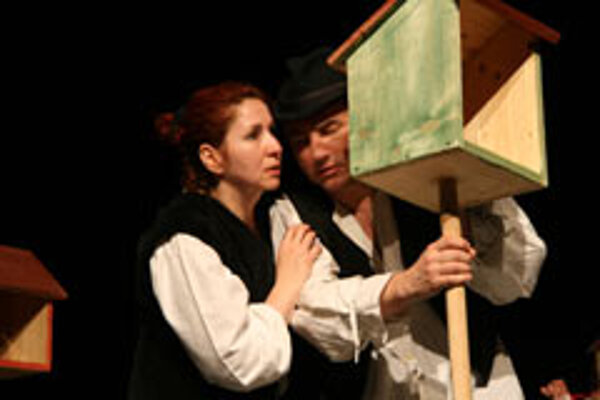 A LONG time ago, when there was neither television nor the internet in Slovak towns and villages, people used to entertain themselves with amateur theatre.

Theatre enthusiasts performed pieces by local and foreign authors to amuse and educate their audience.

This tradition lives on every April at the Paláriková Raková festival, which is held in the village of Raková, near Čadca, in north-western Slovakia.

The idea for the Paláriková Raková came from priest Ján Palárik (1822-1870), a native of Raková, who played an important cultural role, particularly in drama, journalism, and education.

The festival, now in its forty-first year, took place between April 23 and 27 and drew the attention of drama critics, actors, and theatregoers.

Though not widely considered to be an event of regional importance, the participation of some well-known professionals certainly makes the festival one the most exciting in the country. Just to mention a few names: Jozef Kroner, Ladislav Chudík, Július Pántik, Stanislav Štepka, Milan Lasica, Zuzana Kronerová, and many others.

The festival consists of a non-competitive and competitive section that present original Slovak dramas performed by amateur actors. The winner is awarded two opportunities: a performance at the Scénická Žatva in Martin, the country's premiere amateur theatre event, which showcases the best pieces from the amateur scene in the past year; and the chance to represent Slovakia at the DIDA Pivnica festival in Serbia.

This year, 11 ensembles arrived in Raková to perform 19 shows. Amateur actors from Čadca, Tisovec, Spišská Nová Ves, Ilava and Malacky competed for the prizes. Ensembles from Banská Bystrica, Spišská Nová Ves and others performed in the non-competitive section. Divadlo VHV, an ensemble of the Slovak minority in Serbia and the winner of last year's DIDA Pivnica festival, arrived from Báčsky Petrovec.

The first two days of the non-competitive part of the festival were dedicated to marionette theatre represented by Na Rázcestí from Banská Bystrica and Divadlo spod Spišského hradu from Spišská Nová Ves. The second show, Vrešťadlo, performed by Ivetka Liptáková, especially captivated the audience, which was full of children from kindergartens, primary schools, and a local hospital.
The afternoon of April 23 held another attraction for the residents of Čadca - a street performance by Miroslav Mihaľ's Vranov Stilts Theatre.

The performance included real people hurrying to and from work or school being followed by national heroes, such as Juraj Jánošík or William Tell, on stilts. It was a performance full of masks, involved passers-by, important messages, humour, and performance art that served as the event's official opening.

The competitive section of the festival took place in Čadca and Raková on April 24 and 25.

Five of 14 enrolled amateur theatre ensembles were invited by the festival's jury. This year, the Daxner Tisovec ensemble won with its play Na jednom dvore (On one courtyard); followed by the Malá múza ensemble from Ilava, with Trasovisko (Swampland) by Štefan Králik; and the Ján Palárik theatre group from Čadca, with Predposledný súd (The Penultimate Judgement) by Vlado Mores.

As well as theatre performances, the festival was rich in accompanying events held in both Čadca and Raková. This year, an exhibition of works by Irena Zemaníková, an amateur painter from Raková, were among the most inspiring.

The importance of the festival lies not only in its support for amateur theatre, but that it is an intersection for cultural and social spheres. It also sustains regional, national, and international relations through the authors, the plays, and the visiting troupes.