A PETITION by the civic initiative “We do not want to stand by” has now been signed by hundreds of people. The initiative was established in protest at a mass held to commemorate Jozef Tiso, president of the wartime fascist Slovak State. During Tiso’s rule, more than 70,000 people, mainly Jews, were deported to German concentration camps. The vast majority of them died there. 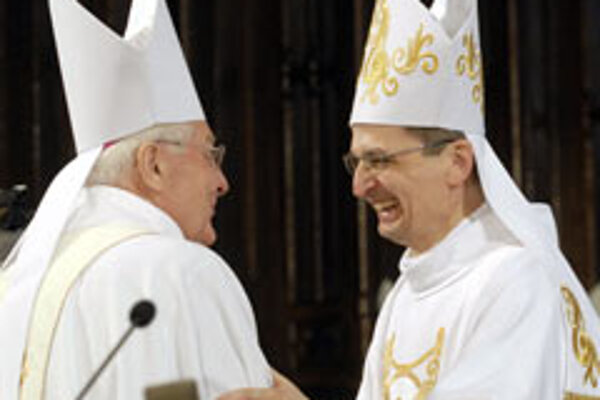 A PETITION by the civic initiative “We do not want to stand by” has now been signed by hundreds of people. The initiative was established in protest at a mass held to commemorate Jozef Tiso, president of the wartime fascist Slovak State. During Tiso’s rule, more than 70,000 people, mainly Jews, were deported to German concentration camps. The vast majority of them died there.

“The religious service, despite being allegedly private, had all the signs of a public festive mass: it was held on the site of a publicly accessible parish church, in the presence of numerous guests and a big crowd of people,” representatives of the initiative stressed at a press conference on May 7. They include Miroslav Kocúr, university educator, Dušan Jaura, a lecturer, and the ethnologist Monika Vrzgulová.

The mass was celebrated by the Archbishop of Trnava, Ján Sokol, on April 18 in Blumentál Church in Bratislava. Representatives of the Roman Catholic Church called it a private initiative of the Archbishop.

The “We do not want to stand by” representatives further stressed that during the service, Sokol used all his episcopal insignia, and liturgical assistance. During the mass for the dead, the altar was flanked by a photograph of Tiso, and the Lorraine-cross emblem used by the fascist Hlinka Guard during the wartime Slovak State. Also near the altar hung a presidential flag from the same period bearing the slogan – Faithful to ourselves – advance together! The organisers of the initiative consider these symbols proof that the mass was misused for political purposes.

“The archbishop plays a role in religious and also in public life, so the mass can by no means be considered just a private issue for Ján Sokol, as the spokesman of the Conference of Slovakia’s bishops Jozef Kováčik has said,” the initiative’s representatives said.

“We want a completely different opinion to that of Archbishop Ján Sokol to be heard from citizens, especially believers,” Miroslav Kocúr, one of the founders of the Initiative, told The Slovak Spectator.

“We do not want to stand by and just watch sympathy towards the fascist Slovak State, led by a Catholic priest, being expressed by bishops through false professional solidarity,” the representatives of the initiative stressed at their press conference.

“This state imposed humiliating, inhumane treatment on the people whom it was supposed to protect,” they continued.

At the press conference, leaders of the initiative also published an open letter addressed to Stanislav Zvolenský, the Archbishop of Bratislava. They believe Archbishop Sokol needed to have had the explicit, or at least “sensibly presupposed”, approval of Archbishop Zvolenský in order to celebrate a mass for the dead outside his own arch-diocese, in compliance with internal church legislation. The mass took place on the territory of the Bratislava arch-diocese.

Zvolenský responded to the open letter on May 10, with a statement published on his episcopal office’s official website by spokesman Jozef Haľko. In the statement, Zvolenský expressed solidarity with all victims of the Holocaust.

“Bratislava Archbishop Stanislav Zvolenský did not take part in the mass, celebrated on this occasion by the Archbishop of Trnava, Ján Sokol. He repeatedly and unambiguously condemns violation of human rights by any person or regime,” the statement reads.

Asked by The Slovak Spectator why the initiators have not targeted politicians who have not reacted to the mass with a similar petition, Kocúr responded: “We are religious people, who understand religious symbolism. We wanted to protest against this mass, which we consider misused for political goals.”

“But our statement is not directed against the church as a whole,” Kocúr stressed. “It is meant against such tendencies, which are not good, and are non-democratic.”

Meanwhile, the petition was signed by many Catholics, but also Protestant Church members and theologians. They included the former dissident and Catholic priest Anton Srholec, as well as Professor Igor Kišš, theologian of the Protestant Theology Faculty of Comenius University. “Many of them took part as individuals in the fight against totalitarian regimes headed by the Hlinka Guards or the Communist Party,” Kocúr added.

As The Slovak Spectator went to press, several politicians had also signed the petition: MEP for the governing Smer party, Monika Flašíková Beňová, and Lucia Žitňaská and Magda Vášáryová, both MPs for the opposition SDKÚ party.

To learn more about the church’s response to the mass and the petition, The Slovak Spectator spoke to Jozef Haľko, spokesman for the Archbishop of Bratislava, Stanislav Zvolenský.

The Slovak Spectator (TSS): The theologians say that Archbishop Zvolenský gave permission to organise this mass for the dead for the president of the wartime Slovak State, Jozef Tiso. Did he do so?
Jozef Haľko (JH): I can only quote the official release. Archbishop Zvolenský answered that question in his official release by saying that he did not attend the holy mass celebrated by Ján Sokol.

TSS: So is Zvolenský’s attitude towards this mass negative?
JH: The Archbishop has given an answer, which was his response to this initiative, and to the letter that came later.

TSS: Could you be more specific?
JH: I tell you exactly as it was formulated. The answer of the Archbishop really addresses what needs to be addressed.

TSS: Does the standpoint of Zvolenský mean that he supports the initiative or that he will sign the petition?
JH: You say the Archbishop was not specific in his formulations. I think that if the Archbishop showed solidarity with the victims of the Holocaust, he thereby answered the letter, which referred to a certain historical context. He said he condemns any violation of human rights, whether by individuals or regimes, and showed his solidarity with Holocaust victims. I believe this is a very specific answer, and a very specific standpoint concerning a specific problem.

TSS: Will he sign the petition of the initiative?
JH: His signature can be found under this standpoint.

TSS: Could you be more specific?
JH: I am specific enough. Archbishop Zvolenský expresses very specifically his opinion on the mass celebrated by Archbishop Sokol. He is rather brief, that is true, but it expresses everything that he intended to say.

TSS: He is not specific about Tiso.
JH: He shows solidarity with victims of the Holocaust. He condemns every violation of human rights by individuals or regimes.

TSS: Including those by Tiso?
JH: That is the reaction to the initiative. I am the spokesman, and I do not want to say anything that was not included in the standpoint.