McFerrin concert is 'Christmas in May'

"IF I said that this is Christmas, I would be wrong. Because Christmas takes place every year and this has happened only once in 22 years." 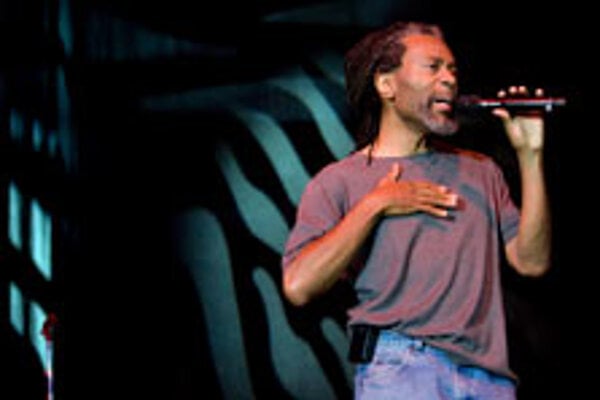 "IF I said that this is Christmas, I would be wrong. Because Christmas takes place every year and this has happened only once in 22 years."

With these words, Slovak jazz singer Peter Lipa introduced Bobby McFerrin, who performed in Bratislava for the first time in 1986 as part of the Jazz Days.

Thousands of people arrived at the National Tennis Centre on May 17 to enjoy the music of this voice magician, who, alone on the stage with the support of no instruments other than his body, is able to hold the attention of the audience during a whole concert.

When this rather small man in jeans and a T-shirt bounced onto the stage in Bratislava on the evening of May 17, the audience welcomed him with frenetic applause. But as if he did not want to lose time, he started to sing immediately, demonstrating his impressively large four-octave vocal range accompanied by percussion created with his mouth and by tapping on his chest.

As in other towns where McFerrin has performed on his tour, he invited local bands and singers to perform with him on the stage. In Bratislava it was the Choir of the Bratislava Conservatory, who had attended a workshop with McFerrin in the past, young jazz singer Lucia Lužinská and a capella band Close Harmony Friends.

The Choir of the Bratislava Conservatory joined the world-renowned musician on his third song, repeating a few musical motifs which created an almost hypnotic effect and provided McFerrin a background for singing the main melody.

While the concert started in a rather solemn atmosphere, McFerrin later revealed his lighter side. He made fun of 'great art', as well as of himself, and sang in a carefree style that was unihibited by tradition.

True to his reputation, McFerrin involved the public in the performance. The Bratislava audience turned out to be a good student, eagerly trying to repeat even the most difficult musical phrases after him. It enthusiastically and joyfully followed his conducting hand, which created a very close communication with the audience.

Probably the most thrilling moment of the concert came when McFerrin played a piano to show the audience which notes to sing.

By jumping from one side to the other with leaps of various lengths and heights, he tested the range and other vocal qualities of the audience.

The second half of the concert brought performances by the remaining guests. With Lucia Lužinská, McFerrin first improvised, and then they sang There Will Never Ever Be Another You.

"After the concert he asked me whether I enjoyed it," Lužinská told the Sme daily. "He gave me back the basic joy in music, which I have not experienced for a long time. Certainly, I would give every musician this pleasure."

It took the audience a little longer to catch on when Close Harmony Friends sang a Slovak-Russian song, finally learning only the refrain.

McFerrin also invited volunteers to the stage to dance during his improvisations. One couple accepted the invitation, giving a somewhat professional performance, best suited to McFerrin's slower singing.

Bobby McFerrin says that he never knows in advance what he will sing at a concert and that he always improvises. Whether this is true or not, McFerrin's performance in Bratislava was a perfect, rich, and fascinating concert with jazz, classical music and African influences, full of energising, intimate, and fragile musical moments.

I hope the Real Estate & Construction Guide 2008, along with the living.spectator.sk sub-site, contributes to a better understanding of the Slovak real estate market. I wish you pleasant reading.