SLOBODY Square was the original site planned for Slavín, the towering obelisk commemorating the almost 7,000 Soviet soldiers who were killed liberating Bratislava in 1945. 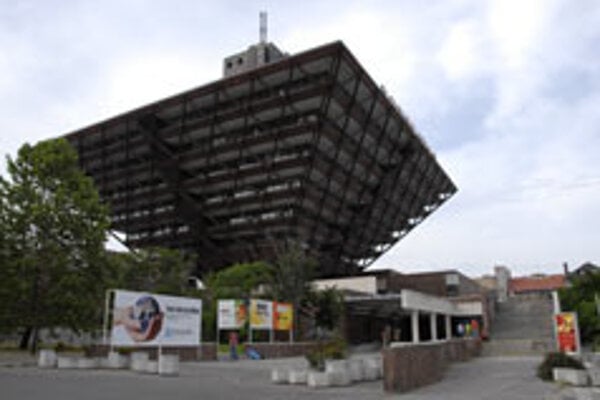 Slovak Radio's inverted-pyramid exterior is not all there is to the building, architects say. (Source: Jana Liptáková)
Font size:A-|A+

SLOBODY Square was the original site planned for Slavín, the towering obelisk commemorating the almost 7,000 Soviet soldiers who were killed liberating Bratislava in 1945.

This was one fact architecture enthusiasts learned when visiting sites open to them during the Days of Architecture in Bratislava on May 16 and 17.

The memorial was one of eight buildings and sites open to the general public on May 17 during the fourth biennial event organised by the Institute of Construction and Architecture at the Slovak Academy of Sciences. On May 16, architects opened their studios to offer people a glimpse into their workplaces and on-going projects.

"I'm very pleased that so many people came," Matúš Dulla, the architect who led the excursion to Slavín, told The Slovak Spectator. "I did not expect that people would find these socialist objects so interesting. I estimated that about five people would arrive at Slavín, and instead there might have been about 50."

The focus of the event was to help the lay public understand how architecture is created and what it is saying, Henrieta Moravčíková, the head of the architecture department at the Institute of Construction and Architecture and leader of the organisational team for the event said prior to the Days of Architecture.

As many crucial years in Slovak history ended in the number eight, and as it is now the year 2008, the programme was organised around architectural reaction to the big historical events which took place in 1918, 1948 and 1968. This year, organisers sought to explain abstract modernism in architecture to the general public, which is generally not well versed in the subject.

Among other places open to the public on the Day of Architecture were the Slovak Radio building in the shape of an upside down pyramid, the exhibition premises of the Slovak Artistic Club (Umelecká Beseda Slovenská), the Institute of the Medical Faculty of Comenius University, the House of Young Natural Scientists, the family home of architect Ivan Matušík, and some buildings currently under construction.

The architects believe that such events popularising both architecture in general and individual buildings are useful and beneficial.

"We have excellent modern architecture," said Dulla. "We have much more modern inter-war architecture than, for example, Austria."

"Austrians often discover objects which we have pushed to the edge of our consciousness, in particular, objects from the 1960s. These buildings now are often deteriorating, and we think of them as representing the previous regime, with which we have split. And now Austrians arrive and wonder at the imposing buildings which were built only 60 kilometres from Vienna," said Dulla, citing the Hotel Kyjev or Prior (the current Tesco department store in the city centre) as examples.
The architects welcome events like the Days of Architecture as an opportunity to stir the interest of people in new architecture, projects which are underway or planned in the capital and in how the city will look in the future.

"I think that it is high time our citizens got acquainted with architecture," Štefan Svetko, a key personality of Slovak architecture of the 20th and 21st centuries and one of the designers of the Slovak Radio building told about 100 people who came to see the building from inside.

"The Days of Architecture were successful," Katarína Andrášiová of the organising team told The Slovak Spectator. "Interest was high. People were probably most interested in Slavín and the building of the Slovak Radio. It really pleased us that the visitors were predominantly young people."

The Institute of Construction and Architecture wants to repeat the event.

"In the future we would like to see the Days of Architecture expanded throughout Slovakia so citizens can learn about noteworthy buildings in their towns," said Andrášiová.