MEMBERS of the Slovak National Council (the country's parliament) have long enjoyed immunity from prosecution, even for offences unconnected with their parliamentary duties. But it has now become clear that this immunity remains in place even if they themselves wish to waive it. 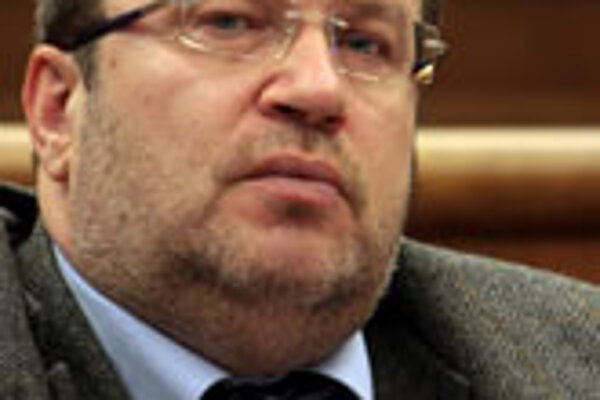 MEMBERS of the Slovak National Council (the country's parliament) have long enjoyed immunity from prosecution, even for offences unconnected with their parliamentary duties. But it has now become clear that this immunity remains in place even if they themselves wish to waive it.

At its latest session, parliament refused to back a proposal for the immunity of Slovak National Party (SNS) MP Sergej Chelemendik to be lifted in order to allow him to be prosecuted. Chelemendik was involved in a car accident in December 2006 in which a woman was injured. Only 39 of the 113 MPs present, mainly from the opposition, voted to allow the prosecution to proceed.

In refusing the request, parliament also defied the stated wishes of Chelemendik himself, who as early as March 2008 sent a letter to the Speaker of Parliament, Pavol Paška, asking to have his immunity waived. He can now be investigated and prosecuted over the accident only after his term as an MP ends.

Prior to the vote, parliament's Mandate and Immunity Committee had recommended that Chelemendik be deprived of his immunity. The result of the full vote therefore took the vice-chairman of the committee, opposition Slovak Christian and Democratic Union (SDKÚ) MP Lucia Žitňanská, by surprise. "I really do not understand, as in the committee we agreed on a position with the [governing] coalition. Even the deputy himself had asked to be deprived of immunity," Žitňanská said immediately after the vote.

"I am surprised to a certain extent, as I expected a different outcome," Chelemendik told the ČTK newswire, also after the vote.

Chelemendik's SNS colleagues voted against withdrawing his immunity. MPs from the other two coalition parties - Smer and the Movement for a Democratic Slovakia (HZDS) - mainly abstained. Among coalition MPs, Dušan Jarjabek (Smer), Miroslav Kotian and Ján Kovarčík (both HZDS) voted for the withdrawal of immunity.

Rudolf Pučík, an SNS MP, told journalists after the vote that he saw no reason to prosecute Chelemendik: "He did not cause the accident drunk, he reimbursed the damage, and apologised to the injured lady," Pučík said.

Smer MP Jana Laššáková said she thought that parliament had made the right decision. "[Chelemendik] reimbursed the person whose health he had damaged," Laššáková told the media, adding: "I think we have a normal level of immunity."

On the other hand, Speaker of Parliament Pavol Paška, who is deputy chairman of Laššáková's party (Smer), has tried several times to abolish MPs' immunity. He says he is still of the same mind, though he failed to vote in favour of withdrawing Chelemendik's immunity.

HZDS MP Kovarčík described Paškaīs stance towards the abolition of immunity as populist. "His primary aim is to appeal to the public with these proposals," Kovarčík told the Sme daily on May 24.
Paška himself avoided any comment on Kovarčík's statement when interviewed by The Slovak Spectator.
"If the plenary session of parliament had accepted my proposal to curb parliamentary immunity, or if we had at least discussed the possible amendment of parliamentary immunity, MPs would not have had to face publicity over something that could happen to anyone," Paška told The Slovak Spectator.
But he immediately repeated that he was still in favour of curbing MPs' immunity. "I am convinced that we simply cannot escape this issue, as there is huge demand from citizens to limit MPs' immunity," Paška added. "I think the stances that I presented were very clear."

Moreover, Paška said, immunity should be completely abolished: "I am a supporter of its total abolition, though I am also prepared to discuss partial amendment or partial curbing of parliamentary immunity."

Lawyer Radoslav Procházka told The Slovak Spectator that parliamentary immunity represents "the protection of the groundless privileges of deputies".

"If the protection exists to allow free execution of MPs' parliamentary mandate, then immunity in the case of road accidents is totally needless and fundamentally breaks the principle of equality before the law, one of the cornerstones of the legal system," Procházka stressed to The Slovak Spectator.

According to Procházka, only MPs' statements in parliament should be protected.

Procházka also noted that the Slovak parliament has failed to narrow the terms of MPs' parliamentary immunity, and instead has merely talked about it: "In fact, it has actually been regularly extended [by Parliament]."

He added that MPs lack any incentive to abolish their own immunity, since the electorate isn't forcing them to do so. Political analyst Miroslav Kusý is of the same opinion. He said pledges to curb parliamentary immunity are conspicuous during election campaigns. But if citizens do not push their elected representatives to fulfil their election promises, parliamentary immunity will not be narrowed. "Its abolition depends on how MPs are monitored by the public. In our state, the checks are far too weak. We see this in many cases," Kusý told The Slovak Spectator.

Kusý went on to say parliament's refusal to withdraw Chelemendik's immunity was also caused by loyalty among deputies. "'I help you, you help me. This could happen to me, too. Why shouldn't we help each other?' This is a common principle in this parliament," Kusý stressed.

"But in parliament, one would expect higher ethical principles. Unfortunately, these are exactly the same type of people who just sit in pubs and cover each other's roguery," Kusý added.

March 2003
MPs ask the government to act swiftly on a proposal to limit the criminal immunity of constitutional bodies. The proposal is supported by 95 deputies.

June 2004
A bill to this effect is presented by Justice Minister Daniel Lipšic (KDH). But parliament rejects the bill, with only 41 MPs voting in favour.

May 2006
Parliament approves an extension of parliamentary immunity, granting MPs exemption from offences classed as misdemeanours. Driving while drunk remains technically prosecutable, but refusing to undergo a test for the presence of alcohol is classed as a misdemeanour and hence covered by immunity.

June 2007
Deputies reject an opposition proposal to narrow their immunity. The justification given at the time is that Speaker of Parliament Pavol Paška would present a more detailed proposal to abolish immunity completely.

February to April 2008
In February, the Speaker Paška tries unsuccessfully to have immunity from misdemeanours abolished. In March, he files a proposal to abolish parliamentary immunity completely, which MPs again reject.

He fails to attract the support of a single MP from among his coalition partners in the SNS or HZDS. A vote in parliament is repeatedly blocked by MPs deliberately absenting themselves (and parliament thus not being quorate).