THE 2007 Aurel Awards, the Slovak version of the Grammys, took place at Bratislava's West Theatre on May 27, but not many of the winners attended, raising the question of whether the ceremony should continue. 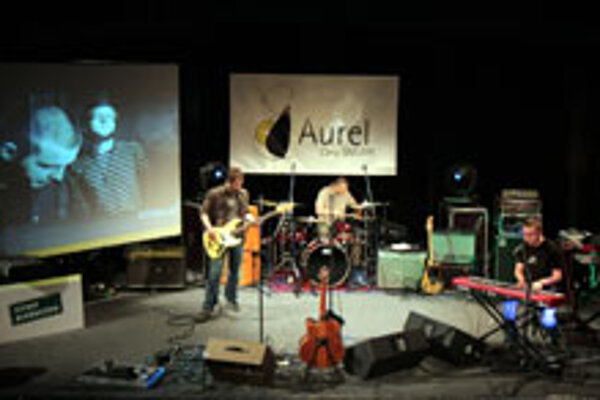 THE 2007 Aurel Awards, the Slovak version of the Grammys, took place at Bratislava's West Theatre on May 27, but not many of the winners attended, raising the question of whether the ceremony should continue.

Desmond and its lead singer Mário "Kully" Kollár repeated their win from last year, taking home the penguin-shaped Aurel awards for best band and best male vocalist.
Jana Kirschner won best female vocalist, which last year went to Tina.
And Prešov-based band Komajota was awarded discovery of the year, one of its six nominations. The band, which has been a hit since the release of its first single Ráno v Novinách (Morning in Newspapers), received the best album award for Časopriestor (Space Time), its debut.
But only half of the main categories' winners attended the ceremony.
"We weren't informed of this date until the very last moment," Desmond's manager explained while accepting the award on Kully's behalf.
The singer was on holiday in Croatia, the Sme daily wrote.
Jana Kirschner was also missing, due to a previous work commitment, the daily wrote. Her newest album, Shine, was released in Great Britain on May 26, so she was giving a concert there.
The daily described the atmosphere in the mostly-filled theatre as intimate, enlivened by a performance by Adela Banášová, Matej "Sajfa" Cifra, and 80-year-old Pavol Zelenay.
Zelenay, who co-founded the Bratislavská Lýra song competition, was on hand to receive a Lifetime Achievement Award. His acceptance speech was laced with a mixture of modesty and sarcasm: "I'd like to express my delight that I'm not abroad and therefore can accept this prize in person."
Muoj Bože (My God) by Katka Knechtová, a song from the soundtrack of the highly anticipated Juraj Jakubisko film Bathory, was chosen as the best song of 2007. Knechtová also did not attend the ceremony, due to a commitment in Prague.
The award for the best video clip went to Horkýže Slíže for R n'B Soul. The clip has been viewed more than 940,000 times on Youtube.com.
The Aurel for best instrumental performance went to Oscar Rózsa. Prešov-based band 100 múch received the best alternative album for Z hrušky dole. Andrej Šeban, who produced the album, received the best producer award.
But questions remain over the awards, including whether it is worth organising a ceremony at all.
This year's show was broadcast only on Fun Radio and Metoo.sk, and the time of the broadcast was changed from Saturday to Tuesday.
Many musicians have failed to attend the Aurels since their inception in 2002. This has led even the organisers to ponder the ceremony's fate, the Sme daily wrote.