THE NATION’S Memory Institute (ÚPN) has called for the killings of 42 people during the communist regime to be investigated as crimes against humanity. The deaths occurred on Slovakia’s borders when it was part of post-war Czechoslovakia. The ÚPN has filed a motion with the General Prosecutor’s Office for it to pursue the cases. 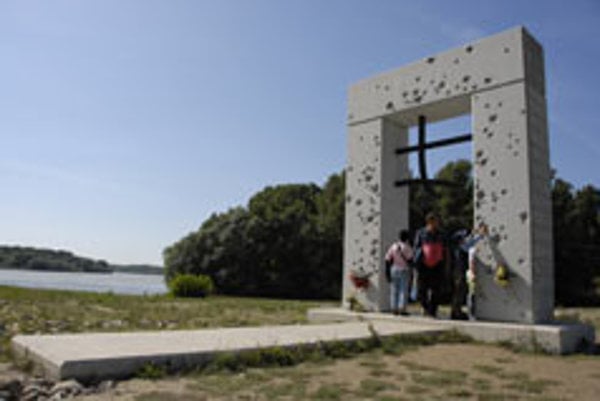 A memorial in Devín to those who were killed trying to flee. (Source: Jana Liptáková)
Font size:A-|A+

THE NATION’S Memory Institute (ÚPN) has called for the killings of 42 people during the communist regime to be investigated as crimes against humanity. The deaths occurred on Slovakia’s borders when it was part of post-war Czechoslovakia. The ÚPN has filed a motion with the General Prosecutor’s Office for it to pursue the cases.

“In the case of these 42 people, the ÚPN has archived documents from the Border Guard showing how things happened and who was responsible for the crimes,” Ľubomír Morbacher, head of the Documentation Division at the ÚPN, told journalists.

“These documents supplement a report on the facts of the case which prove that crimes against humanity were committed,” Morbacher added.

“The motion filed at the General Prosecutor’s Office concerns all the responsible officials who could be found in the archives,” Ivan Petranský, chair of the ÚPN’s board, told a press conference on May 29.

The ÚPN published the motion on its website, along with the names of the victims, and also of those it says were responsible for their deaths. According to the sources available thus far, more than 600 fatalities occurred along Czechoslovakia’s borders during the communist period.

Morbacher explained that the ÚPN was describing this number as ‘more than’ 600 to reflect the belief of ÚPN employees that there are likely to be more cases which have not so far been recorded or documented. Many of those killed were buried at unknown places in compliance with a secret order issued in 1952 by then-Minister of State Security of the Czechoslovak Republic, Karol Bacílek.
“The victims of the Iron Curtain should certainly include those who tried to swim across a border river and drowned, and those who committed suicide under unclear circumstances after being cornered, or stepped on a landmine,” Morbacher told The Slovak Spectator. But in such cases it is difficult to prove criminal intent, he said. “Of course, the ÚPN will record other cases as it uncovers them, so 42 is certainly not the final number,” Morbacher stressed.

According to the ÚPN, border guards and state security officials killed those who tried to flee by shooting them, by electrocuting them on live barbed wire, by exploding mines, by firing on cars as they tried to cross the border, by shooting down planes, or by attacking them with dogs.

An unauthorised crossing of the border was defined as a crime in all Czechoslovak criminal codes until as late as 1989. “From 1976, this classification was in defiance of Section III, Article 12 of the International Covenant on Civic and Political Rights, which was legally binding for the Czechoslovak Socialist Republic”, the ÚPN said in an official statement.

At the Czechoslovak border, not just Czechs and Slovaks were killed, but also citizens of East Germany, Poland and Hungary, who were trying to emigrate through our border. “Killing other state’s citizens during actions on foreign territories was an unprecedented violation of international law,” the ÚPN statement stresses.

Asked by The Slovak Spectator why preparation of the documentation on these 42 cases took so long, Morbacher said that the ÚPN has only had chance to study the material concerning these cases since it took over management of them. During communism, any attempt to emigrate was investigated by state security (i.e. the secret police, or ŠtB); the ÚPN started taking over ŠtB archives only after it was founded in 2002. Until then, ŠtB archives were administered by the Slovak Information Service (the SIS, Slovakia’s present-day intelligence service) and the Interior Ministry, and were classified.

“Immediately after 1989, there was no political will to investigate these cases,” Morbacher told The Slovak Spectator.

Even now, the ÚPN has yet to take full possession - from the Slovak Interior Ministry (MV SR) Archives in Nitrianska Streda - of the personal files of the communist-era Border Guard (PS) officials, according to Morbacher. “This makes it more difficult to define responsibility for killings at the borders,” Morbacher said.

“I even know of a case in which the directors of the MV SR Archives in Nitrianska Streda sent Czech Police (who have an office to investigate crimes committed under communism) archive documents concerning a case they were investigating with the names of officials and commanders of the PS involved blacked out,” Morbacher added.

Morbacher says he was most shocked by the case of Hartmut Tautz, an 18-year-old from what was then East Germany, who was literally torn to pieces by border guard dogs in Petržalka in 1986. He says the soldiers who were assigned to guard the border, and who let the dogs loose, could have saved his life. “As Tautz lay bleeding to death, they investigated the crime site, looking for other ‘invaders.’ At that moment, Tautz was lying helpless and crying for help in German, just 22 metres from the demarcation line,” Morbacher told The Slovak Spectator.

Morbacher also described a case from 1956, when Emil Likovský, 22, tried to flee to Austria. After he had reached part of the Morava River, and was already technically in Austrian territory, a border guard began shooting at him. In spite of this, he made it to the Austrian side of the river but then received a shot to the head, after which the border guard dragged him back to Czechoslovak territory. “He died, forgotten, in the Institute of Social Services for Handicapped Adults in Kovarce in 1995, where we found his documentation,” Morbacher said.

Morbacher said there were cases of successful emigration to the West. However, their number decreased rapidly after barbed wire and mines were put in place along the borders. “These cases were documented by the Border Guard and were analysed by officers, so as to prevent any repeat,” he said.