CHILDREN will soon have to start learning two foreign languages at elementary schools: one from the third grade, and a second from the sixth grade. Up to now, learning a second foreign language had been optional. The change is part of a new plan by the Education Ministry, beginning in the next school year, which also introduces stricter guidelines on how schools should teach languages. According to the ministry, schools should deal with any shortage of language teachers at junior elementary level by re-training existing teachers, irrespective of the subjects they currently teach. 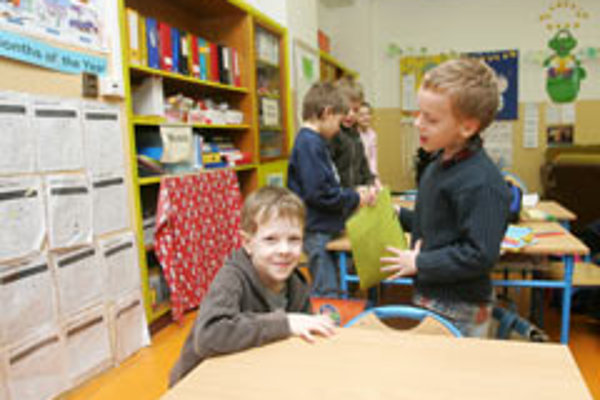 CHILDREN will soon have to start learning two foreign languages at elementary schools: one from the third grade, and a second from the sixth grade. Up to now, learning a second foreign language had been optional. The change is part of a new plan by the Education Ministry, beginning in the next school year, which also introduces stricter guidelines on how schools should teach languages. According to the ministry, schools should deal with any shortage of language teachers at junior elementary level by re-training existing teachers, irrespective of the subjects they currently teach.

Elementary schools have, for the most part, welcomed the plan to teach two foreign languages and said it’s something they frequently do already. They also said that the lack of language teachers is not acute. Instead, some see a bigger problem with the insufficient number of lessons available for teaching languages.

Teaching of all foreign languages at schools will be based on the same concept, including textbooks, according to the ministry. The curriculum for foreign language subjects will not be set according to grades but rather by defining the communication level a pupil of a certain grade should reach.

“The new tuition of foreign languages, compared to the previous system, supports using up-to-date communication technologies and innovative methods, for example content and language integrated learning (CLIL) which provides pupils with an opportunity to use their language skills in other subjects,” said Stoklasová.

The Education Ministry also assigned a new project to the State Pedagogic Institute, entitled “Education of Teachers of Elementary Schools in Foreign Languages.” It is intended to increase the number of foreign language teachers in junior elementary schools, the ministry said.
In future, other projects focused on senior elementary school and high school teachers who would be able to extend their education into foreign languages are being considered,” Stoklasová said.

“We have never have had a problem with children coming from the junior school being poorly prepared, for example, to learn English in senior school,” Hessová told The Slovak Spectator.

She said she understands the intention of the Education Ministry to train junior school teachers to teach languages in such a way that they will also be prepared for teaching young children, something which she thinks is a good idea.

The weakness of the new system is, according to her, the fact that it does not create enough lessons to teach a second foreign language.

“We need to have at least two lessons in the second foreign language each week,” Hessová told The Slovak Spectator.

The children need to have five lessons of the first foreign language in the fifth grade a week and then four lessons a week from their sixth grade. However, that would leave only one lesson a week for the second foreign language.

“One lesson of a foreign language a week: that is nothing” she said.

However, she added that, until now, her school had used the so-called voluntary subjects to teach a second language and it is likely to continue doing so. “We have taught the second foreign language within the group of subjects which were voluntary, but which everyone took.”

Anna Vallušová, an English language teacher and the head of languages at the St Gorazd elementary school in Prešov, regards the introduction of a second foreign language at elementary schools as a good decision, particularly from the point of view further study by children at high schools.

However, she also pointed out that the second foreign language should be taught in at least two lessons each week in order to maintain continuity in teaching. The teaching should also take into account individual pupils’ abilities to learn.

In her opinion, it is questionable whether there will be enough teachers to teach two foreign languages, although her elementary school in Prešov does not suffer from a lack of language teachers.

“Very fast training of foreign language teachers does not mean they end up with good qualifications to teach the language,” Vallušová said.

Božena Haklová, principal of the elementary school at Trebišovská Street in Košice, thinks the obligation to teach two foreign languages will make schools more equal when it comes to attracting future pupils.

“Our experience suggests that more pupils apply to schools with enhanced language tuition,” Haklová said, adding: “We have been more focused on sports, and noticed an outflow of pupils. Now, the only important thing is what languages we offer.”

The school has not detected a significant lack of foreign language teachers but Haklová admitted that there is a greater degree of mobility among this group of teachers. “They mainly leave to work abroad as interpreters,” she said. Haklová added that schools cannot offer them competitive financial rewards.

She therefore welcomed an offer from the Education Ministry to provide free foreign language tuition for teachers. But while teachers have expressed an interest in studying, it remains to be seen how many will have the opportunity to take part, she told The Slovak Spectator.

Children at the elementary school at Karpatská Street in Žilina have been learning a foreign language from their first grade for some time, principal Emília Wiesengantnerová told The Slovak Spectator. A second language is then taught from the fifth grade, but only in special language classes.

“The second language is suitable for children who did not have difficulty coping with the first language,” she told The Slovak Spectator. “However, it might be a bit difficult for all the children.”

Žilina also has sufficient language teachers, Wiesen-gantnerová said. “Their number has stabilised in Žilina compared to several years ago,” she said.