THE END of May marked Žilina’s 14th Old Town Festival, which was celebrated together with the 800th anniversary of the first written mention of the city. 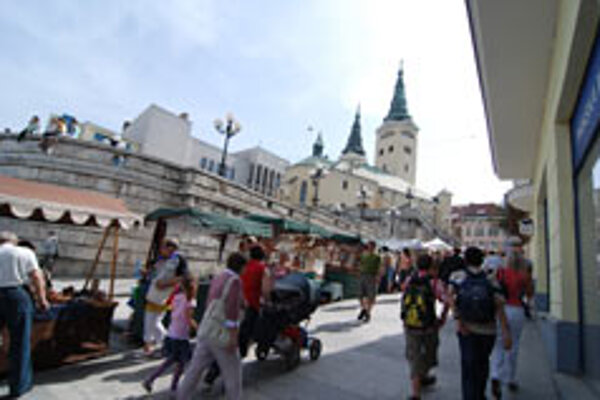 The streets of Žilina were filled with revellers and handicraftsmen. (Source: SITA)
Font size:A-|A+

THE END of May marked Žilina’s 14th Old Town Festival, which was celebrated together with the 800th anniversary of the first written mention of the city.

The festivities started with a traditional procession through the streets, after which Mayor Ivan Harman passed the keys of the city to artists.

At Hlinkovo Square, concerts by AYA, the Sherpa Band, the Tam Tam Orchestra, and Gipsy.cz took place. Art students displayed their work the next morning, and there were blues and funk concerts, as well as a performance by the David Koller band. The fun continued past midnight at the SMS 2008 Afterparty in the Street Club.

Mariánske Square was also the site of performances by various children folk ensembles and the professional Jánošík Army Folk Ensemble.

The festival concluded with an open-air prayer for the town of Žilina, its inhabitants, and peace. It involved representatives from a broad spectrum of faiths, including Roman Catholics, Protestants, Greek-Catholics, Orthodox sects, Jews, and Seventh-day Adventists.

The festival is also famous for its accompanying events, such as a handicrafts fair and stalls of tinkery, pottery, needlework, painted glass, woven products, and wooden toys.

There was certainly no lack of food, including homemade sausages, a wide range of traditional cheese products - from string cheese to slovenský oštiepok - sweets, gingerbread, and cakes.
One of the most memorable events was Myslite nosom, športe hlavou (Clown Doctors), a charity event at which 201 people donned clown noses and finger puppets. It will be listed in the Slovak edition of the Guinness Book of Records.

Mayor Harman said he was pleased with the festival’s organisation and success.

“The growing number of visitors from outside Žilina confirms that the festival’s quality has expanded its reach, making it the most anticipated event in the Horné Považie region,” he stated.