Sculptor: Geoglyphs are mental, not physical

AUSTRALIAN sculptor Andrew Rogers completed the construction of two geoglyphs – figures made by removing soil or piling rocks in a desert or mountainside - under Spiš Castle and in Starý Smokovec on May 31, the SITA newswire wrote. 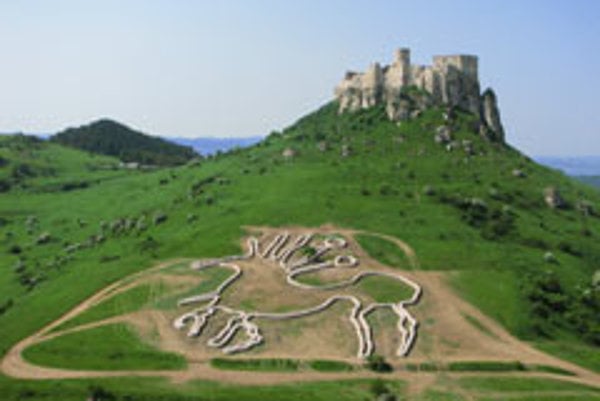 This geoglyph below Spiš Castle copies the image on a Celtic coin found during excavations at the casstle. (Source: SITA)
Font size:A-|A+

AUSTRALIAN sculptor Andrew Rogers completed the construction of two geoglyphs – figures made by removing soil or piling rocks in a desert or mountainside - under Spiš Castle and in Starý Smokovec on May 31, the SITA newswire wrote.

“This is the 34th and 35th construction in the world, and we were never behind,” Rogers said after having spent two weeks in Slovakia during the project.

Rogers said he creates geoglyphs around the world to provide a place of contemplation and reevaluation of the past.

The Slovak structures, which were part of a UNESCO project titled Rhythm of Life, are about constructing ideas, not physical structures, Rogers said.

“It is about the many people involved in the project, and this project is just the beginning,” Rogers explained.

His first geoglyph in Slovakia was created at the foot of the hill under Spiš Castle. It shows a horse from a Celtic coin that was found during archaeological research there and measures 100 by 100 metres in size.

“This castle is one of the most astounding constructions in the world. I am very happy I could place one of my statues here,” Rogers said.

The Celtic horse can be seen passing under Spiš Castle, but its form can only really be appreciated from a bird’s eye view. The outline of the horse is formed by a travertine stone wall that is one metre by one metre by 800 metres. The stones lie on top of each other freely, without a layer of mortar.

Rogers said he is satisfied with the work of the locals who helped build it.

“It is crucial that it is made well. It is here for our children and grandchildren,” he added.

The second geoglyph is smaller, taking up an area of only about 35 to 36 metres. Its outline is 330 metres long and about 20 centimetres high, and consists of granite from the Tatras.
Rogers said it is an “optimistic symbol of life”.

He also said he was fascinated by the nature he saw in the Tatras, and was fond of the people he had met during his stay.

Rogers made the first geoglyph for the Rhythm of Life project in Israel in 1999. The others are in Bolivia, Chile, Australia, Iceland, China, Sri Lanka, Turkey, India and Nepal.
It is the biggest sculpture project in the world.