LESS THAN 48 hours after the controversial Press Code took effect, Vladimír Mečiar, chairman of the Movement for a Democratic Slovakia (HZDS), became the first person to request a correction. 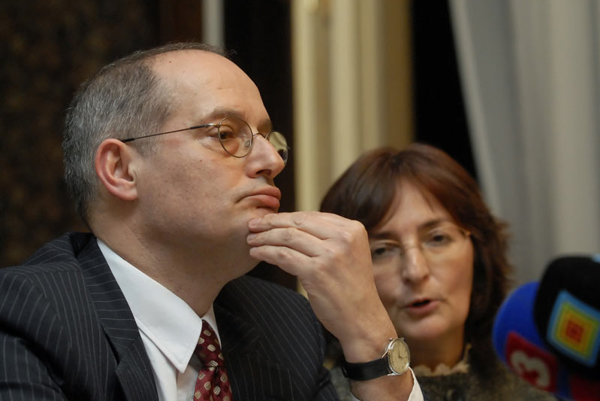 LESS THAN 48 hours after the controversial Press Code took effect, Vladimír Mečiar, chairman of the Movement for a Democratic Slovakia (HZDS), became the first person to request a correction.

The former prime minister took offense at an opinion piece by Marián Leško published in the Sme daily on June 2 in which Leško described the HZDS's failed attempt to install its nominee at the Slovak Information Service.

"As almost the entire article is untrue," Mečiar's letter, which Sme published on June 7, reads, "we require a correction under the new law that took effect on June 1, 2008."

The letter is signed with only the HZDS party's abbreviation, but the postmark on the envelope shows it was sent from Trenčianske Teplice, where Mečiar lives.

"It is questionable whether Mr. Leško really wrote [the article]," the letter asserts.
HZDS spokesperson Monika Zakariásová confirmed for The Slovak Spectator that the letter is authentic.

"Chairman Mr. Mečiar used his right for a correction according to paragraph 7 of the Press Code," Zakariásová said.

When asked whether it is right for politicians to require a correction of commentaries, rather than just factual mistakes, Zakariásová told The Slovak Spectator: "Is it right to lie about politicians, attributing to them things they have never done and statements that they have never made?"

Matúš Kostolný, editor-in-chief of Sme, also confirmed that the HZDS had requested the correction.
"Not even the new law should allow for the correction of an opinion," Kostolný told The Slovak Spectator.

Sme eventually published a correction for one mistake in the piece, which identified Ján Kovarčík as vice-chairman of the HZDS. Kovarčík held the post between 2001 and 2005.

The controversial Press Code, among other things, obligates newspapers to publish responses from politicians or the public, even if the facts are true and not libellous, and to provide space for a correction.

The provision on the right to reply is the section most frequently criticised by international organisations, including the Organization for Security and Co-operation in Europe (OSCE).

"Instead of handling the right to correction or reply in compliance with the standards, Slovakia is forcing its media to become subject to political give and take," said Miklos Haraszti, OSCE representative on Freedom of the Media, on April 10. "This goes against the country's international commitments to protect the freedom of its media."

Regarding Mečiar's request for a correction, Deputy Prime Minister Dušan Čaplovič said the trouble lies with who Mečiar is, not the law.

"He probably wants to present himself in some way," Čaplovič told the Sme daily on June 7. "He was the first, the newspapers will be full of him and he will be famous again."

Asked whether he still thought that the law was meant to be used by the public, not politicians, Čaplovič answered that Mečiar is a member of the public who happens to also be a politician.
Miloš Nemeček, head of the Association of Publishers of Periodical Press, said that the right to reply was not meant to apply to commentaries.

"This has confirmed that politicians will be the ones using the Code the most," Nemeček told The Slovak Spectator.

Nemeček continued that a request for a reply must meet formal requirements defined by the law, which Mečiar's did not.

"Otherwise, the person does not even have to cite the law, if the request is sensible and logical," he said. "I believe that an unbiased editorial team will give space to any reasonable request. This has happened many times."

"So this attempt can't be taken seriously," he concluded. "It just confirms that politicians tend to react not just to facts, but also opinions."

Political analyst Miroslav Kusý said Mečiar's reaction only proves that the politicians made the law for themselves.

"And from the very beginning, such absurdities appear as the request to make Sme change the opinion in Leško's article," Kusý told The Slovak Spectator. "Simply put, it shows that the Press Code is serving its purpose."

Sme's editor-in-chief responded to Mečiar's letter in his editorial.

"The fact that this government does not have a rational response to media has not changed," Kostolný wrote. "But the newspapers must correct themselves about one thing: the fears of this law being abused are no longer just fears - they have become a reality."