THE DEBATE over the new Education Act hasn't died down since it was approved in Parliament on May 22. 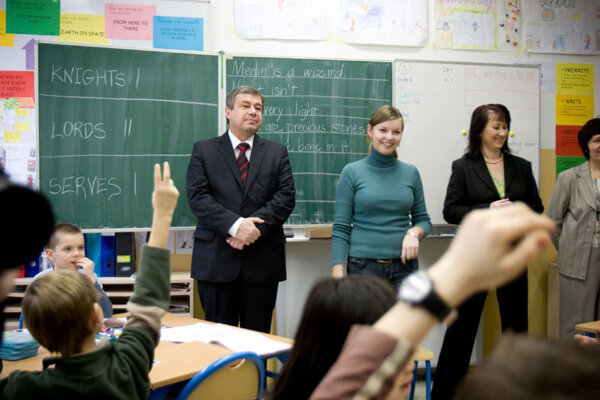 THE DEBATE over the new Education Act hasn't died down since it was approved in Parliament on May 22.

All sides agree on certain core issues: that the previous education legislation, which dated from the mid-1980s, needed to be replaced; and on the need for more foreign language study in schools from an earlier age.

But the sides remain diametrically opposed on how quickly teachers and schools can prepare for the law's reforms, as well as key provisions concerning funding and textbook selection.

The Slovak Spectator spoke to Education Minister Ján Mikolaj, who has said the Act's main principle is about "giving teachers freedom".

The Slovak Spectator (TSS): What major changes will the new education law bring to Slovakia?
Ján Mikolaj (JM): We made all schools and school facilities equal, regardless of how they're administered. The priority is to introduce two-level education programmes: the state programme and the one created by individual schools. We give teachers and schools the freedom to shape each school's educational system by themselves.

We also introduce training levels based on ISCED international classification schemes, and we make all professional schools equal. We widen the education system by adding kindergartens, conser-vatories, elementary arts schools and language schools. We begin training at kindergarten free of charge for children one year before obligatory schooling starts, while we also introduce individual education plans.

We are establishing a Council for Curriculum, the National Institute for Certified Measuring of Education, which will evaluate quality and carry out national testing of ninth-graders as well as some other tests on qualified samples and the external part of final exams.

TSS: How will the new education law improve teaching?
JM: The law makes room for the schools to create their own educational programmes and succeed by attracting as many pupils as possible to these programmes. It will be up to the individual schools how they take advantage of this opportunity. Reform cannot be forced; it cannot be projected in detail, or dictated. Moreover, the education law is only the first part of the reform.

The ministry is currently working on another law: the law on the status of pedagogical employees. A third law will pertain to professional schools and a fourth to lifelong education.

TSS: The opposition and the Conference of Bishops of Slovakia requested that the law not go into effect for one year so that education reforms could be better prepared. Are reforms prepared well enough?
JM: The education reform plan has been in progress for several years. We are not starting from scratch; instead, we are building on what has already been achieved. As a basis, we used the Millennium Programme, approved in 2001. Of course, we have added new things. Almost every day, something new appears in informatics. The borders have been abolished, the mobility of students is increasing, and project management and marketing are in demand. These times are bringing new challenges in business, and we do not have enough schools focused on enterprise.

All in all, the education system has to develop, too; if we do not catch the train, we will definitely be left behind.

TSS: Ex-education minister Martin Fronc said that the reform will wreak havoc at schools and that, instead of changing the educational system, it preserves the outdated model of the unified school.
JM: The law creates new possibilities for schools. Thanks to the two-level model, the schools can shape their own profiles and use the elective lessons in the area of the school's individual orientation: computers, natural sciences, languages, etc. Alternatively, they can improve the quality of education following the state education programme and add depth to the programme by using their elective lessons for practical training, seminars, and laboratory work.
The ministry will not dictate to the schools; it is their decision. Of course, we have also prepared model programmes, which can be used by the schools in future.

TSS: The new education law wants educators to teach in the "new" way only in the earliest grades of elementary and secondary schools. However, critics of the reform say that the reform does not prepare teachers for this new way of teaching, yet forces them to teach that way.
JM:

Ján Mikolaj is a member of the Slovak National Party (SNS), which nominated him to the education ministry. Between 2002 and 2003, he was an MP for the HZDS. In 2003 he became an independent MP, later joining the SNS.