WHEN somebody says that he is a volunteer, very few people in Slovakia know what this really means. Though the situation is improving, the status of volunteers in Slovakia remains low, with neither the general public nor the state showing them much respect. 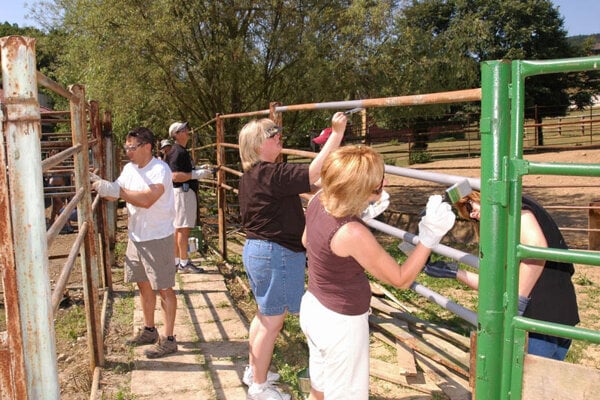 Painting a fence with other volunteers is a great way to build team spirit. (Source: Courtesy of USSK)
Font size:A-|A+

WHEN somebody says that he is a volunteer, very few people in Slovakia know what this really means. Though the situation is improving, the status of volunteers in Slovakia remains low, with neither the general public nor the state showing them much respect.

"A volunteer is a person who carries out any activity in his or her free time for the benefit of other people, without requiring any reward for it," Alžbeta Mračková, the project manager of CARDO, a civic organisation which supports the development of volunteering in Slovakia, told The Slovak Spectator. "People who want to volunteer are the kind of people for whom it is not enough to work to make money, but who are looking for a meaningful activity, one which will fill them with satisfaction."

The low prestige of volunteering is partly a consequence of the fact that many do not call themselves volunteers.

"We have to create some prestige in volunteering," said Mračková. "In western European countries, for example, volunteering is a form of prestige for wives in households whose financial needs are satisfied by husbands with senior positions in large companies. This is not yet common in Slovakia."

However, the biggest problem experts see in Slovakia is the fact that there is no law defining a volunteer or volunteering. Instead a handful of laws refer to the practice in passing.

According to Peter Handiak, a legal expert, this causes several problems.

"Firstly, there is no health and welfare insurance system for volunteers," Handiak told The Slovak Spectator. "Moreover, insurance companies refuse to insure volunteers' work against third parties."
Now a new discussion has begun about whether a law institutionalising volunteers and volunteering is needed in Slovakia.

"Every discussion, even if it doesn't end satisfactorily, will increase awareness of volunteering," said Handiak. "At least it will open a wider discussion about it and this is enough to increase the standing of volunteers."

A corporate taste for volunteering

Companies are one conduit for volunteers. Even though people are at first surprised to hear that companies engage in corporate volunteering, a number of them in Slovakia have already discovered the benefits it can bring.

"Many people assume that companies are only interested in making a profit and utilising their employees as much as possible," Pavel Hrica, who is programme director for corporate philanthropy and corporate social responsibility of the Pontis Foundation, an NGO, told The Slovak Spectator. "But when they become acquainted with the background and reasons for corporate volunteering, then they start to understand."

Everyone involved can benefit from volunteering activities. Apart from giving their employees the feeling that they are helping the community, they also give them a better feeling about their employer. And volunteer activities are a good opportunity for new recruits to get to know their colleagues. During such events employees can build team spirit as well as develop new working skills, which can later prove useful in their jobs.

"Volunteering by our employees, aside from the work itself, contributes to binding the working team together," Ivica Hricová of Slovanet told The Slovak Spectator. "Participants can make new friends and contacts and get to know themselves and their colleagues in new situations."

"Employees are proud to work for a company which is interesting and does something beyond the framework of chasing profits," said Hrica.

The experience at steelmaker U.S. Steel Košice (USSK) is similar. "By volunteering, not only the company but also the employees themselves attest that they care for the region in which they work and live, and are willing to grant their free time and labour for the benefit of those who need it," Ján Bača, spokesperson for USSK, Eastern Slovakia's biggest company, told The Slovak Spectator.
More and more companies are seeing the advantages of volunteering by their employees. According to Hrica, an increasing number of companies have announced grant programmes, through which employees can apply for support for volunteer projects which they know about or in which they are directly involved. These may be to renovate the school or kindergarten attended by their children, or to volunteer in a youth environmental or charity organisation.

Many organisations establish their own volunteering activities.

"These involve various physical tasks, for example painting a fence or the rooms of a school or a children's centre; or environmental activities to restore a monument or the ruins of a castle," said Hrica. "But companies have also started more sophisticated projects, for example by sending employees to schools to give students interview training, or advice about how to write their CV or motivation letters."

While Slovanet prefers to take part in less well-known activities and organisations, USSK mainly cooperates with partners with whom they have had a positive experience during previous projects.
"On the other hand we also take into consideration the interests of our employees, whom we survey," said Bača. For example, USSK employees have volunteered to create parks in facilities for the elderly and to improve schools for disabled children. Their volunteer activities also include a facility for abandoned animals and a zoo.

KPMG Slovensko focuses in particular on helping NGOs, which it picks according to the interest shown by its employees via an internal company survey, said Balážová.

International companies, for whom corporate social responsibility and similar activities are part of their 'DNA', are most active in corporate volunteering in Slovakia, Hrica told The Slovak Spectator.

"In Slovanet, the impetus came from two sources concurrently: from the parent company and from employees themselves," Hricová told The Slovak Spectator.

In USSK, the involvement of employees was a natural link to the company's activities.

"The initiative was born here, but our US expats are among the first to report an interest in participating in volunteer events and share their experience with us," Bača said.

According to Hrica, compared to the other post-communist countries, Slovakia is the most active in corporate volunteering. It has not only caught up, but even overtaken, western countries in some fields.

"In Engage, an international network of companies through which companies exchange experience and inspiration in corporate volunteering, the Slovak group is the biggest," said Hrica. "After two years it includes 18 companies."

Companies themselves have created, in cooperation with the Pontis Foundation, a volunteer event, Naša Bratislava (Our Bratislava). Twenty companies and their employees spent two days last September helping the city, its environment, schools, NGOs and other organisations. Eastern Slovakia immediately joined in, holding a similar event, Naše Košice (Our Košice), this May.
Hrica does not see any significant legal barriers to corporate volunteering in Slovakia.

"Volunteering is about people's free and voluntary choice," Hrica told The Slovak Spectator. "Companies usually make their employees an offer, and call on them to join in, but it's still up to them whether they join or not."

Slovanet would welcome more support in this area.

"If a company wants to begin such volunteer activities, it must look for 'its own ways': whom - and how - to support, which is quite a time-consuming process," said Hricová. "In particular, more information would help. The state should also invest more into supporting activities in which people deal with matters which directly affect them," she added.

"The older generation remembers compulsory work on Saturdays during communist times, which discredited community involvement," Hrica told The Slovak Spectator. Some of these people perceive a call to go and clear up their area on a Saturday in a similar light. But there is a huge difference, said Hrica.

"During communism such involvement was compulsory and those who did not join in suffered the consequences. Now it is completely voluntary," said Hrica.

Hrica sees the media as a tool which can be used to improve the status of volunteering in Slovakia.
"I think that the media are reluctant to write about volunteer activities by companies in a positive way for fear that it looks like marketing," said Hrica. "This prevents companies from promoting such activities. Moreover, if a company makes its volunteer activities seem too much like marketing, employees will turn against it.

They will feel the activity lacks authenticity and will perceive that the company intends to reap PR benefit from their willingness to work as volunteers - and as a result will be less inclined to participate."

"Of course, when a company does it sincerely, in good faith and over the long term, this improves the community's perception of them," said Hrica.