T-Mobile introduces Slovakia to an original form of transport – environmentally friendly magenta coloured three-wheelers will give you a downtown ride in Bratislava, Košice and Piešťany. 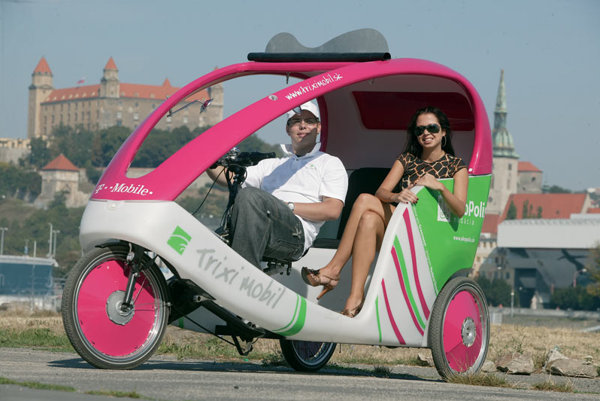 T-Mobile introduces Slovakia to an original form of transport – environmentally friendly magenta coloured three-wheelers will give you a downtown ride in Bratislava, Košice and Piešťany.

In Asia, rickshaws are a common transportation means whereas in European metropolises, their updated versions have become a popular tourist attraction. Thanks to T-Mobile, rickshaws have this year made it also to Bratislava, Košice and Piešťany branded as “Trixi mobiles”. These ecological three-wheelers utilise a riding mechanism similar to bicycles and on top of that are also equipped with an additional electromotor for start-up and for riding uphill. Also materials they are produced of are environmentally friendly – e.g. the booth is fully recyclable.

Given their distinctive magenta design, you will recognise Trixi mobiles immediately. The driver pedalling the vehicle has takes the front seat. Drivers are part-timers in appropriate physical condition and knowledge of at least one world language. The rear part is reserved for two travellers who – thanks to the roofed booth – can enjoy a ride in almost any weather.

Trixi mobiles travel in the three cities over fi xed routes. The rides will cover the city centres and neighbouring areas. If you want to get a ride all you need to do is wave at the driver or get aboard at designated stands. Trips can be also booked in advance at the telephone number 0904 104 104 (Bratislava), 0911 567 423 (Košice) and 0904 104 455 (Piešťany).

The goal of the Trixi mobile project is to support environmentally friendly transport and contribute to further
developing attractiveness of tourism in the Slovak cities. The project at the same time supports the programme
“Greenways – Roads for Healthier Life” aimed at creating routes for recreation, sport and non-motorised transportation around the country.