My straw house, my castle

SOME PEOPLE take a roof over their heads for granted, while others would give anything for a place to sleep, even a straw house. And in Spišské Podhradie, straw houses are becoming reality. 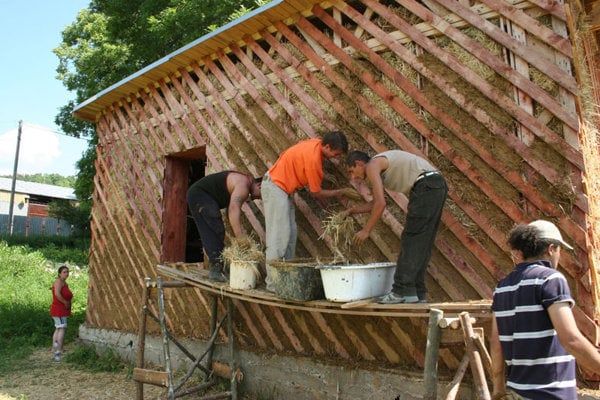 A new project is helping Roma learn to build their own houses. (Source: Courtesy of Člověk v tísni)
Font size:A-|A+

SOME PEOPLE take a roof over their heads for granted, while others would give anything for a place to sleep, even a straw house. And in Spišské Podhradie, straw houses are becoming reality.

Since the summer of 2007, the local Roma have been building a model house made of bales of straw and mud, which is a far cry from being a rickety shack. Its newest addition, an earthen stove, was built in early June.

Two years ago, the Slovak branch of the Czech humanitarian and development organisation Člověk v tísni (People in Need) launched a project that helps disadvantaged communities find appropriate housing solutions. According to Mirka Hapalová, director of the Slovak branch, the straw bale house was a reaction to the present policy of so-called lower-standard apartment construction supported by the Slovak Ministry of Construction and Regional Development.

"Lower-standard housing is not very practical," she told The Slovak Spectator. "Not only is the construction very time-consuming, but the building materials are wasteful of energy and ecologically unsound."

Moreover, these apartments can cause a "vicious cycle" that only worsens the situation of disadvantaged communities, Hapalová stated.

"The construction of lower-standard housing is relatively expensive," she remarked. "The expenses can only be recouped by increasing rents, which often makes it impossible for tenants to afford the apartments, forcing them to once again become rent dodgers."

Hapalová added that the Ministry's programme has one more drawback.

"It neglects a very important aspect, namely the tenants' attitude towards their homes," she explained. "If the Roma do not take part in constructing their own housing, they will always be regarded by other people as freeloaders that have been given everything and give nothing in return."
For all the aforementioned reasons, the activists from Člověk v tísni in co-operation with the Kolping Society Slovakia and the city of Spišské Podhradie, decided to offer disadvantaged communities an alternative by training them to build their own houses made of bales of straw. During a series of workshops led by professionals, the Roma familiarised themselves with all stages of house-building.

The model straw bale house, which is one of the most important achievements of the project co-financed by the European Social Fund and the Equal Initiative, should, after completion, serve as an inspiration both for municipalities and poor people. However, the building will not remain empty for long.

"A multi-generational family from Spišské Podhradie who have actively participated in the construction from the very beginning will soon move into the new house," Hapalová said, adding that the family had been selected by local authorities.

Homes of hay and mud

Though living in a brand new house after years spent trying to pay high rents for substandard housing may seem a sufficient motivation for disadvantaged people to interest themselves in alternative housing solutions, Hapalová said that there were barriers to overcome before the Roma understood it was worth trying.

"Alternative construction methods being quite rare, many people initially distrusted the techniques or materials we use," she told The Slovak Spectator. "Furthermore, the Roma wanted to be closer to the living standards of the majority population and they therefore did not consider houses made of 'hay and mud' attractive."

Nevertheless, with every workshop the Roma have gained more and more confidence in the instructors.
"A number of Roma who have taken part in our workshops have already expressed a serious interest in using alternative construction methods for their own future dwellings," remarked Hapalová. "This is even more noteworthy given the fact that no state financial support can presently be obtained for this type of building."

Embracing all the important steps in building a straw bale house, the project enables people from disadvantaged communities to try out each of the proposed alternative techniques in practice.
"After a theoretical introduction to natural materials, the participants attended several practical training sessions," said Michal Sládek, workshop instructor. "They were showed how to lay the wooden foundations of the house, build its wooden framework, make roofs of straw and daub and carry out water-conduit installation."

During the first week of June, Člověk v tísni organised a workshop in building energy-saving earthen stoves that can be used for both cooking and heating.

"Such stoves are exceptional thanks to two important features," Sládek told The Slovak Spectator. "Firstly, the wood burns at very high temperatures and it can therefore be completely exploited. Secondly, hot smoke from the stove accumulates inside the chimney and is released only after it cools off. This ensures that heat remains inside the house, and less wood has to be consumed as a result. It is probable that in winter, for instance, cooking one lunch will be sufficient to heat the whole house [for several hours]."

The Roma apparently find the workshops interesting, with the construction of the model earthen stove attracting as many as 28 participants. The workshop was made even more informative by the presence of Lars Keller, a Danish architect who has been travelling around the world to acquaint disadvantaged communities with alternative construction techniques.

According to Keller, disadvantaged people are generally willing to learn new methods of saving energy, although their reasons may differ from those of the majority population.

"The more privileged situation you are in, the more capable you are of looking beyond your own horizon, and vice versa," he told The Slovak Spectator. "People who are under economic or social pressure may not understand the environmental aspects of alternative building methods, but they will undoubtedly appreciate the economic benefits almost always linked with the saving of energy."
Consequently, it is seldom difficult to persuade people that they should construct energy-efficient buildings, Keller said.

"If one alternative is cheaper, almost everyone chooses that option," he observed, adding that when switching to alternative housing methods, one's habits also have to change. "For a coal plant to produce electricity, coal has to be dug out, processed and transported, and all this costs money. Windmills or solar panels are taken care of by nature, but nature does not work on command, and not every day can be sunny or windy. So, if you want to have free electricity or water, you must change your own behaviour, adjusting it to the weather."

In Keller's opinion, it is mainly official authorities who keep knowledge about alternative building techniques from reaching the public.

"Politicians are the main obstacle to the information process," he said. "They decide who gets money. However, awareness is not such a big problem. At present, it is more important that the politicians change their regulations. This will solve the issue literally in one night, because architects design buildings in compliance with legal standards. Everything else comes automatically; developers will try to supply the new demand, educational institutions will teach future builders the required techniques, and so on."

Having travelled through many countries, Keller has a lot of experience with various nations and their customs. Nevertheless, he said that in certain fundamental respects, no difference can be found.

"When it comes to keeping warm in winter and heating your house, people are the same everywhere," he stated.